Indigo, Orange And Johto
- 2-28-2001-16:33-EST - Serebii Well i have finished updating the Indigo League, Orange League And Johto Journeys Pages with pics (1 from each ep to be precise) so Have a look:

As a Little Taster of the Quality Of the Pics, I will post the Newest and Oldest One 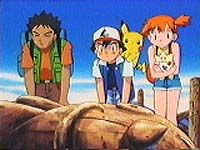 Well Thats All for today, See ya

Well alot of you have been asking if Raikou will ever be on the tv show. Well i just found a pic which has been in my hard-drive for weeks. I almost deleted it. Well enjoy:

Well i got one more episode guide for you. As before it might spoil your enjoyment of the show if you know what happens. Well here it is:

Well there isnt much news, except that the Gameboy Advance is coming out next month in japan and June 11 in America

Well I am getting a video of Stadium 2 soon, I will make screen shots of that and paste them here

Well...so many of you wanted it, but I FINALLY managed to write some Episode Guides. From Episode 137 (Foul Weather Friends) To Episode 146 (Tricks of The Trade) Click on the pic below that suits your fancy. Also just hover over the Pic for th Episode Name :) WARNING. These might contain spoilers for alot of people. Enter at your own risk of having the Show spoilt

I will put some more up soon

Well Kevin decided he didnt want me having his animations on my site anymore so I have started to make my own. Remember, if you take these Please Link to me :) :

Also could you join my host's Neopets guild if u are intrested:

Thats about it for today, see ya

Well there have been some more neo news which i forgot to put up. Sorry.
Neo Discovery will have 2 Theme Decks: BrainWave and Wallop.
Neo Revelation (Neo 3) will be released around about October 11th in the US
Southern Islands will be released as a Gift Set in September (US)
There will be a tournament expansion with 151 cards, both old and new in it. Could these be the Vending Machine cards that Japan saw a couple of years ago?
Well thats about All Today

Neo 2 will be called Neo Discovery in America and all other English Speaking Countries. I wanted it to be called ruins. Also, the second series of Johto eps starts in america in october with 52 more johto episodes :)

Also, the Pokédex is coming along swimingly. I will have a sneak preview of it as soon as possible

I have been stumped onto what to add to the Pokédex. Could you please send in what you wish to see in it. Also there is no news recently :/ But i will try and sort out all the sections so that there are no errors or missing Pages.

You guys have been waiting for me to add a new section in for ages. Well I have, The Stadium 2(Stadium GS) section which is now bigger than 1 Page It has in-depth detail on the mini-games, the Gym Leader castle, the lab and alot more. The good thing is it isnt finished yet. I am making lots more pages to add to it as we speak. I will also try and get todays episode pics and last weeks since my vender is being slower than a Snail with no movement :D

There isn't much news at the moment. I am working on the Stadium 2 Section so look forward to that. It'll be the best Section on the web

Well, we lost an update so this seems like the first update in 4 days, but it isnt. I am trying to get pics of Saturday's Episode: Charizard's Burning Ambition. Also I have got a new email address, Please use webmaster@serebii.net from now on. Also, I am sometimes busy so when contacting me on ICQ or AIM, dont moan if I dont respond. Well thats about all for today

I just popped on to tell all the UK visitors here that there are new episodes on everyday on Sky 1 at 8am.