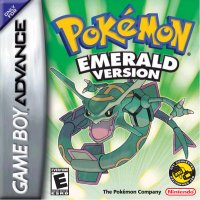 Pokťmon Emerald is the third game set in the land of Hoenn. On first looks this game seems to be identical to it's predecessors, Ruby & Sapphire, however there is much more that meet's the eye in this game

First thing you'll probably notice are the Pokťmon's Animations, similar to how they were animated in Crystal, which are making a welcome return to the Pokťmon games. Also, the graphics in this game are sharper than in Ruby/Sapphire with more detail to the overworld

Both Team Aqua & Team Magma are heavily involved in this game's storyline as they both try to awaken their respective Pokťmons...and when they do, thats where the game radically changes from the other games with a whole bit where they battle and you have to stop them.

The Battle Frontier contains 7 buildings which all incorporate a different style of battling where you have to battle through multiple trainers to get to their leader's, The Frontier Brains. These battle styles include Rental Pokťmon, Random Rooms, Relying on your Pokťmon's Nature to battle, Tournements and many more...definitely a way to challenge any trainer

The Gym Leaders & Elite Four have also been updated with different Pokťmon and a whole new gym leader! To make things even better you can rebattle the Gym Leaders up to 4 times via the Match Call feature

There are many more things to Emerald including Johto Starters, Contests, Breeding & Ability Additions, Rare Legendary Pokťmon, Pokťmon from other Regions and many many more