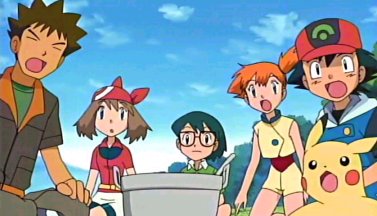 Several Months ago, it was made aware to us that Pokémon USA had taken the Merchandising rights for Pokémon back from 4Kids who have been running it for the last 8 years. However, from e-mails received by Eric Stuart and Veronica Taylor, two of the major voice actors who have been with the dub of the show since 1998 have said that since Pokémon USA is dubbing the show from Season 9 onwards, the company has decided to hire new voice actors...not just new ones to continue such as other tv shows have done, but new actors to IMITATE the current voice actors and try and get the same sounding voices. Apparently, the upcoming 10th Anniversary special is going to be used as a testing ground for these new voices but the voice actors for the 9th Season have yet to be chosen, possibly using this special as a testing ground...but there is time to save it

Many of the fans of the Animé across the community have suggested starting a Mail-In campaign in order to convince Pokémon USA that the dub should continue to be made with the previous Voice Actors, those who have put their hearts and souls into these characters for 8 years and have become attached to the characters.

While the show will still look the same, have the same plotlines, twists and so forth, the Voice Actors are what make a show and changing the voice actors half way through the saga is just wrong, and bad for the franchise as a whole.

The way we suggest to do this is to either send an e-mail to the Pokémon Company (feedback@pokemon.com or, preferabbly, to send a snail mail to:

I am a longtime fan of the "Pokémon" television series, and I am utterly disgusted and dismayed that you have made the decision to recast the entire voice cast from top to bottom. This is disrespectful to those like me who've stuck it out with you over these past ten years, and even moreso to the hard working actors whose voices you have decided to needlessly cast away. In the places of truly talented people like Veronica Taylor and Eric Stuart, we will get 'sound-alikes.'

Please reconsider this terrible decision, and avert disaster for one of the best TV shows on the air.

In a recent post on our forums, Maddie Blaustein, the actress who has played Meowth let us know that KidsWB didn't pick up Pokémon due to it having a completely new cast and new writers and Pokémon USA have thus started negotiations to get the next season aired on Cartoon Network. However this would be with the New Voice Actors, however if you still feel that you want the Old Voice Actors & Writers back, then you can e-mail the heads of Cartoon Network and let them know your concerns at the following addresses: Bob.Higgins@turner.com & Mark.Norman@turner.com. Again don't write agrivated e-mails, be calm and let them know your concerns about the show if you do feel that the new Voice Actors are not suited to the show.