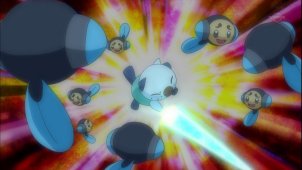 On their way to Nimbasa City, Ash and his friends stop at a lake to stop and eat lunch. Ash remembers that Trip told him about Oshawott not being able to open his eyes while using Aqua Jet. Ash tells Iris and Cilan that he is going to do some special training with Oshawott. Iris suggests that he also call out his other Pokémon as well, and that she will look after them. Cilan asks Iris to take care of his Pokémon as well. Tepig, Swadloon, Scraggy, Snivy, Emolga, Dwebble, and Pansage are brought out of their Poké Balls. Emolga and Snivy look at each other and then look away in disgust. Ash brings out Oshawott and tells him that it's time for them to begin the special training. Ash and Oshawott do some stretching prior to their special training. Ash tells Oshawott that they will be doing special training in the water. Oshawott jumps into the water and starts swimming, as Ash comments that he is not surprised that Oshawott is a good swimmer. He says to Oshawott that his Aqua Jet doesn't hit its target, since he doesn't open his eyes underwater. He says that they should to do their best to overcome that. Oshawott is very worried about trying to open his eyes underwater.

Ash holds Oshawott's hands, as he dips his head underwater. Ash goes underwater to check, but Oshawott still has his eyes closed. Ash tells him that he can't keep his eyes closed underwater. Ash tells him that on their next try, he will dive underwater as well, and that Oshawott should open his eyes to look at him. Ash counts to three, as they both go underwater. Ash opens his eyes, and again notices that Oshawott has his eyes closed. Ash forcefully opens Oshawott's eyes which upsets Oshawott, as he uses Water Gun to send Ash out of the water and onto the grass. When Ash hits the ground, he is knocked out. Meanwhile, the other Pokémon and Iris are playing with a rubber ball. Emolga jumps up to grab the ball, and throws it hard at Snivy. Snivy uses her Vine Whip to send the ball away, as Dwebble puts its claws up which break the ball. Dwebble apologizes for breaking the ball, as Iris says that it isn't Dwebble's fault.

Nearby, Scraggy notices some Poké Ball shaped objects in a bush. The objects lift up their heads to reveal that they are Foongus. Foongus try to tell Scraggy to get away from them, but uses Headbutt on them. Foongus tell him to go away, but he looks away and then sticks his tongue out at them. The Foongus become angry with Scraggy. Emolga and Snivy continue to fight, as they hear commotion and then head towards where Scraggy is with the other Pokémon. Cilan spins around and says that lunch is ready. Cilan wonders what's going on, as Iris tells him that something must have happened. Scraggy continues to try and attack, as the Foongus make a pyramid and use PoisonPowder to attack Scraggy and the other Pokémon who had just arrived. Cilan and Iris show up and find that all of the Pokémon have been poisoned.

Meanwhile at the lake, Ash is telling Oshawott to keep trying to open his eyes underwater. Oshawott shakes his head to say that he doesn't want to. Cilan and Iris call to Ash, as he and Oshawott go and see what has happened to everyone. Iris explains that the poison spores of the Foongus have paralyzed the Pokémon. Ash scans Foongus with his Pokédex. Cilan says that they need antidotes, but he has no more with him. He says that there is also no Pokémon Center nearby. Iris asks if there are Remeyo Weed in the lake nearby. She explains that if it is boiled down, it can work as an Antidote. Cilan looks for Remeyo Weed in his scanner, and sees that the lake does indeed have some at the bottom. Cilan decides to go with Ash to look for it, while Iris decides to look after the Pokémon.

Ash and Cilan walk through weeds to get to the part of the lake where the Remeyo Weed is found. Cilan explains that it is usually found at in between rocks at the bottom of the lake. Ash wants to swim down to find them, but Cilan says that the space is so small, that only Pokémon can get the Remeyo Weed. He explains that in olden times, people used to use Water Type Pokémon to gather them. Ash says that Oshawott is going to do it, as Oshawott looks really scared about it. Cilan says that it would be difficult for Oshawott to reach since he cannot open his eyes underwater. Ash says that he will control Oshawott by grabbing and pulling on his ears. Ash grabs an oxygen mask, and goes into the water. Meanwhile, Iris mixes Oran Berry juice to give to Axew, so that he can recover some of his energy and lighten the symptoms. Iris tells Axew to hang in there while Ash and Oshawott are getting the plants.

Oshawott tries once more to open his eyes, as the Tympole send Bubblebeam towards him. Oshawott fully opens his eyes and deflects the attack, as the Tympole are very shocked. Oshawott gets ready to use Razor Shell, as the Tympole swim away. Ash tells Oshawott that the Tympole might attack again, so they should hurry up and return to the surface. They try to return to the surface, as Palpitoad is watching them. Palpitoad tells its camouflaged friend Stunfisk to attack them. Stunfisk swims up to Ash and Oshawott, and uses Thundershock to send them out of the water and onto land. Ash says that Oshawott saved him, but he was suddenly paralyzed, as a Stunfisk appears at the surface to laugh at them. Ash scans Stunfisk with his Pokédex. Stunfisk goes back underwater, as Ash says that with it in the water, they cannot get the Remeyo Weed. Cilan says that it's fishing time, as he says that a Stunfisk and a human are an earnest match. Cilan casts the line, as he maneuvers it to get Stunfisk to grab onto it. Stunfisk bites onto the lure, as Cilan reels it in onto the ground.

Water shoots up from underwater, as a Palpitoad appears in front of them on a lilypad surrounded by mist, as it looks very angry. Ash recognizes the Pokémon as a Palpitoad, and scans it with his Pokédex. Palpitoad uses Mud Shot to attack Ash and Oshawott, and Stunfisk uses Mud Bomb to attack Cilan. Cilan says that Palpitoad and Palpitoad seem to be friends, and asks Ash to take care of Palpitoad. Cilan reels Stunfisk into the air, and spins it in the air to allow Ash to battle Palpitoad. Palpitoad scares Oshawott, as Ash says that he must defeat Palpitoad to save everyone.

Oshawott uses Water Gun, while Palpitoad uses Hydro Pump to break through and hit Oshawott. Oshawott hits the ground hard and gets mud on its face before shaking it off. Oshawott tries to use Razor Shell, but Palpitoad confuses him with Supersonic. Palpitoad uses Mud Shot to hit Oshawott, as Cilan says that Palpitoad is quick at shifting between moves. Oshawott uses Aqua Jet, but it misses since Oshawott still has his eyes closed. Palpitoad uses Mud Shot, as Ash tells Oshawott to open his eyes to dodge the attack. Ash reminds Oshawott that he was able to use Razor Shell against the Tympole with his eyes open, and says that he can do it. Oshawott remembers blocking away the Bubblebeam attacks with Razor Shell since his eyes were open. Oshawott finally opens his eyes to dodge the Mud Shot attack, and finally hits Palpitoad with Aqua Jet to knock it out. Cilan finishes spinning Stunfisk and puts it on the ground, as Stunfisk is very dizzy from all of the spinning. Ash throws his Poké Ball, and Cilan throws his Poké Ball to try and capture the two Pokémon. Both Poké Balls shake, and then finally Stunfisk and Palpitoad are captured. Ash and Cilan celebrate successfully capturing the Pokémon, as Ash's Poké Ball shrinks. Cilan explains that it won't work since it is Ash's seventh Pokémon on hand. 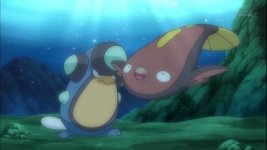 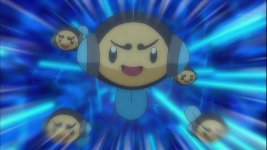