Where Did You Go, Audino? 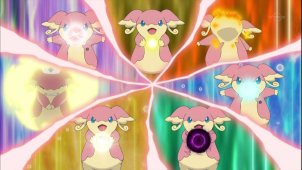 The group is walking through fog, completely nonplussed. Ash wonders where they're going, while Iris and Cilan comment that they've never really found their way at all. Suddenly, Pikachu calls out, seeing a shadow walking towards them. The group gets excited, since they believe that this mysterious shadow could help them, and Ash and Cilan interrogate the "person" turns out to be an Audino who is not looking at all happy. Ash checks Audino on the Pokédex, though Cilan mentions there's something wrong with it. After many attempts to ask Audino what's wrong, and where to go in this foggy area, Audino ignores them and walks away.

However, after Audino goes away, the fog clears! Ash, Iris, and Cilan are excited. However, their excitement soon wears off when two people come with an Officer Jenny, saying that they are under arrest! Both Christie and Doyle shout at them claiming that they are the ones responsible for the Audino's disappearances. The group protests, but the boy tells his Solosis to use Psychic, which is obeyed, lifting them off their feet. Later, the trio is still trying to explain that they would have never done anything illegal. Cilan tries to explain to Officer Jenny that he is the Striaton Gym Leader and for her to confirm it. After making a phone call, Officer Jenny confirms that they haven't done anything wrong and apologizes. They ask why she was so upbeat earlier. Officer Jenny explains that many people's Audino have gone missing, and are possibly getting stolen. Subsequently, they go into Officer Jenny's office where she introduces them to two kids, Doyle and Christie. Both of them apologize for attacking them earlier, while Ash, Iris, and Cilan introduce themselves to them as well. Doyle apologizes for getting worked up earlier, as one of the Audino that is missing is his grandfather's. Doyle gets angry again and berates the "evil organization" that is doing this to the Audino. Christie asks what the evil organization could be doing, while her Gothita agrees. Doyle thinks for a while, and says that they possibly want to make a healing organization, something Christie doesn't think it's likely.

Officer Jenny breaks up the squabble and she says that there are three Audino left in the town. Cilan gets very interested and decides to help on the case, claiming it's "detective time". Ash and Iris decide they want to help too, so they all split into pairs: Ash and Doyle, Iris and Christie, and Cilan and Officer Jenny. Before all of them could leave, Officer Jenny gives them a tracking device to put on the Audino and a screen to monitor where they're going, with the help of the tracking device. All of them agree and head off. Ash and Doyle are seen explaining to the elderly couple how the Audino are disappearing. The elderly couple agrees to put the tracking device on Audino which is stuck on its body. Ash and Doyle say goodbye to the elderly couple and move on. Iris and Christie are also explaining to another person, named Mimi, that her Audino needs to stay safe. Without a second thought, Mimi agrees as she doesn't want her Audino lost. Cilan and Officer Jenny are yet again explaining to a woman, who agrees to put the tracking device on her Audino in worry that hers might go missing as well.

Later, however, Ash and Doyle are having some troubles: The Audino of the elderly couple is now going elsewhere, as they can see on their tracking device. Doyle recommends for the man to put it in the Poké Ball which is promptly obeyed. Soon, however, the Audino breaks out and heads off on its own. Ash and Doyle promise to retrieve it and they follow the Audino.

Iris and Christie are having similar problems: Mimi's Audino is also going away. Iris and Christie tell Mimi not to worry and follow it, and that's just what Cilan and Officer Jenny have to do as well, as the woman's Audino is climbing out of her window. While all three pairs are chasing their respective Audino, they suddenly hit crossroads and meet up with each other, much to their surprise. They decide to head off together as a group from here on out, and begin their journey. They follow the Audino until they lose track of them. Cilan tells Ash to bring out his Roggenrola to help them locate where the Audino are headed.

However, after a while, the group is having no luck, the Audino have already gone up a ladder to somewhere, and what's worse, they took the ladder away after they were done with it. Ash (unsuccessfully) tries numerous times to go and follow them, but to no avail. Doyle comes to the rescue, ordering his Solosis to use Psychic on him once again which is followed, and Ash immediately gets up to the top of the cliff. Doyle's Solosis does this to the others, and they all make it up to the top of the cliff. Once up there, Doyle brags about his Solosis, making Christie extremely angry, but they can't worry about that now, as they can clearly see the Audino walking away on the bridge in front of them. They attempt to walk across the bridge, only to have the Audino to destroy it with Psychic. Doyle tries to get his Solosis to use Psychic yet again to carry them across, however Christie interrupts and tells her Gothita to use Telekinesis which has the same effect, including Doyle's reaction. After venturing further, Roggenrola leads them to a base area where Team Rocket was keeping the Audino captive. Team Rocket brings out both Woobat and Yamask to attack everyone. Doyle and Christie use their Pokémon to fight back. Ash has Roggenrola attack the machine that is keeping the Audino captive with Stone Edge which destroys the machine, setting the Audino free. The Audino look angry and deliver different attacks (Flamethrower, Thunderbolt, Hyper Beam, Shadow Ball, Ice Beam, SolarBeam and Charge Beam) altogether at Team Rocket. Team Rocket uses their jet packs to run away. Doyle and Christie ask Officer Jenny who helped out more, and she explained to them that Roggenrola was really the one who helped solve the case the most. 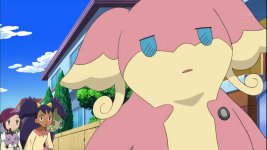 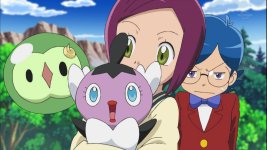