Crisis from the Underground Up! 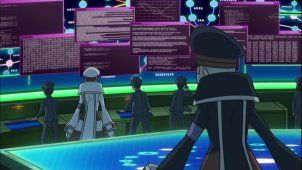 The episode starts as Ash, Iris and Cilan look at Nimbasa City from its outskirts. Cilan then looks over while explaining what the Small Court, Big Stadium, and the Nimbasa Gym, while Ash is content to have his Gym battle. However, an exhausted Meowth insists they go to the Pokémon Center first so he can get some rest, and then tour around town. Iris then suggests this to Ash. Ash, with his Gym battle being his top priority, argues that it should be first. However, Ash soon admits he is hungry when his stomach rumbles. Cilan tells the gang to follow him to the Pokémon Center. Cilan suggests to them that they should take the underground subway system as it is the fastest way to get around in Nimbasa City.

They then arrive at the entrance of what appears to be a subway station. Ash is confused, and thinks Cilan has made a mistake. However, Cilan, in one of his connoisseur moments, declares that this is no ordinary subway, it is the Nimbasa City Subway System! Iris, like Ash, is not hazed. Despite this, they enter the subway station anyway.

Cilan is shown to be going nuts in the station, excitedly examining a subway car on display. He explains that this is the first of the cars to be mass-produced, a system in which many of the same products -- cars, in this case, are manufactured at once, thus being produced cheaper and faster. Both Ash and Iris are confused by his lectures, asking questions and then not really being impressed by Cilan going on and on about the subway system. After then identifying himself as a "Subway Connoisseur", he ponders what that would mean. However, Meowth, irritated and impatient, drags Cilan away, much to Cilan's dismay.

Inside of the subway car, Cilan looks through the door to the subway control area with an excited look on his face. Iris asks Cilan what he is doing and that he's embarrassing them. Cilan asks them to look at the control, explaining that they are run on automatic controls and watched over by the central control room. All of a sudden the subway car comes to an abrupt stop leaving everyone wondering what caused it. Although not recognized at the time, the ghost train run by Team Rocket runs by the halted subway car. Ingo and Emmet arrive to help get the subway car started again, Cilan recognizing them right away and explains that they run the subway system as subway bosses. Emmet, Ingo, and Cilan recognize each other and become reacquainted, finding out what each has been doing since they last spoke.

Later, they arrive at the Nimbasa City Pokémon Center. Ash and Iris remark on how big it is. Nurse Joy says that's due to it being very busy. Meowth then explains of the luxurious Pokémon services, including massages, and special baths in some sort of machine that holds water. Cilan also notes that this Pokémon center is also home to a Poké Ball vault, known to contain powerful Pokémon. Meowth suggests to Ash and Iris that they have their Pokémon get these treatments, including Pikachu and Axew. They both agree, and Nurse Joy's Audino carry them there on a cart.

While they are going to the massage room, Meowth remembers something he needed to do, and delays the trip while he makes a phone call. He walks into a Telephone Booth, closes the door, and calls Dr. Zager to confirm his location. Dr. Zager then passes it on to Jessie and James. The Audino bring Meowth, Axew, and Pikachu through to the locked security door. Meowth explains how it scans those who try to enter, only allowing Audino and Nurse Joy to pass the scan.

Later, Meowth sneaks into the vault containing all of the powerful Pokémon Cilan mentioned earlier. Dr. Zager makes the Driftveil Drawbridge open and the controls break. Ash goes and makes a phone call to Professor Oak not too long after the call is made it becomes disrupted and connection is lost. Ash and his friends then tries to solve the mystery of all the strange occurrences. He opens a vent and throws Pikachu and Axew, who he captured earlier, down the vent. While throwing the Poké Balls down the vent, he comments on how easy hacking the security system was. The Poké Balls, along with Pikachu and Axew, then end up in Team Rocket's subway car, infamously known as the Ghost Train. Ash, Cilan, and Iris approach Nurse Joy and asks about the situation. Cilan remembers all of the strange occurrences, and realizes that those responsible must be after the Pokemon. Nurse Joy takes the three to the vault where they discover all the Pokémon are gone. Cilan sees the air vent is open and suspects someone used it as an escape. Ash jumps down and follows the system until he reaches the end, meanwhile all of a sudden the subway control room starts beeping indicating that all subway cars are stopping again. When they reach the subway tracks, they see Meowth and ask what's going on. Meowth explains that he tricked them the whole time into thinking he was on their side. Jessie brings out Woobat to attack Ash with. Ash calls out for Pikachu and Pikachu cries out back to Ash. Team Rocket takes off. They head for Anville Town, where Dr. Zager will be waiting to take the Pokémon back to Giovanni. Cilan explains to Ash and Iris that the next course of action should be to go back to the control room to speak to Ingo and Emmet.

Ingo and Emmet explain to them about a location on the subway system map that all subway cars must eventually cross to get through. Everyone goes to find the mail carrier car, to be able to use that to get to the location quicker. Cilan puts on his Subway Conductor hat and begins to operate the car to get them to the location. They stumble upon what looks like Team Rocket's ghost train. Ash decides to try and jump on top of the car, but it explodes gas indicating that it was a fake. After that explosion of gas, more decoy cars begin to emerge in the subway system. The Subway Bosses call Cilan and asks if he had seen the ghost train yet. Cilan says no, but there was a car headed their way. Team Rocket's ghost train passes them by. 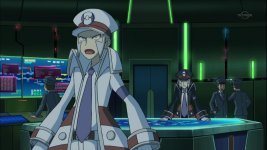 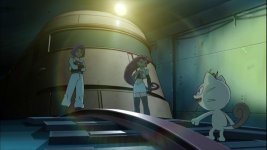