Ash Versus The Champion! 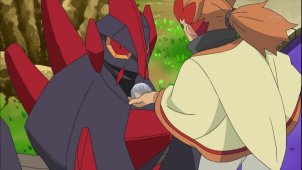 As the episode begins, Ash and his friends are on Route 5 and see the Driftveil Drawbridge, as Cilan tells them that once they cross the bridge, they will be leaving Nimbasa City where so much happened. Ash is excited about going to Driftveil City for his next Gym match. Ash and his friends see a festival, which has Patrat, Deerling, Lillipup, a man balancing on an object while holding three Patrat, a man singing and dancing to music with two Patrat, a woman and a man on a ladder with three Pidove, and a couple of kids hitting Sandile on the head with mallets in a sandbox. Cilan explains that it is the Performer's Street, and that dancers and musicians present performances that they are proud of. Iris suggests that they check out the performances. Kids are shown getting Vanillite shaped drinks, a man is getting food at a stand, a man and woman are getting Japanese food at a stand, four chefs are preparing food on a griddle, and kids are eating food on a stick. Ash and his friends wonder what they want to try 1st. Cilan says that he knew they would be interested in the food. Ash sees that Trip is on the Performer's Street as well.

Ash goes up to Trip and shows him his four Gym badges. Trip shows Ash his badge case, which has five badges in it, as Ash is surprised and disappointed that Trip is one step ahead of him again. Trip says that the number of Gym badges represents the difference in skill. Ash tells Trip that if he is so confident, that they should have a Pokémon battle. Trip says to Ash that he doesn't have time for a battle, and that he is waiting for Alder to appear. Ash asks Trip if he is referring to the Champion of the Unova League. Trip explains that getting to Alder is his goal, and that winning the Unova League is only a step to reaching his goal. He says that his goal is to win the Unova League and to defeat Alder. Trip explains that back when he was a child, Alder explained to him which road to take as a Pokémon trainer.

In a flashback while a young Trip is feeding Alder's Bouffalant, Alder asks him what his dream is. Trip says that he wants to become a Pokémon Champion, by defeating him. Alder tells him to have more and more battles, and to get stronger and stronger. The young Trip became very excited about becoming a Pokémon trainer. Alder tells him that he will defend his title until the day Trip challenges him. Ash says that he wants to meet Alder as well. Iris wonders if Alder is so elusive that no one knows when and where he will appear. Trip says that since Alder has been around the area recently, he decided to wait for him.

Ash and his friends walk up to Alder, as Trip says that they only met once when he was little, and asks if Alder remembers him. Alder remembers him, but thinks that his name is Tristan as Trip corrects him. Ash walks up to Alder, introduces himself, and asks to have a battle with him. Trip says that he should be the one to battle Alder first, as Ash says that he asked first so he should go first. Alder tells them that he will battle both of them. Alder suggests that they battle him at the same time. Trip says he wants to battle him by himself, and Ash says the same thing. Trip tells Ash that he can go first, and says that it would be good for Ash to get pummeled and to learn Alder's strength. Alder decides to battle Ash first, as he calls him Ashton instead of Ash.

Alder brings out Bouffalant, while Ash uses Pikachu for the battle. Ash scans Bouffalant with his Pokédex. Cilan says that Electric type moves and Normal type moves are are neutral against each other. Trip comments that for Alder, type compatibility is irrelevant. Alder lets Ash make the first move. Pikachu uses Thunderbolt, as Iris calls it Pikachu's specialty. Iris and Cilan look over and see that Alder isn't doing or saying anything. Pikachu's Thunderbolt hits Bouffalant and causes some damage. After the attack, Alder does not give Bouffalant any commands. Pikachu uses Quick Attack with Alder not saying anything again. Pikachu's Quick Attack hits Bouffalant's head. Cilan wonders if it is just the way Alder battles. Pikachu uses Iron Tail to hit Bouffalant's head. Cilan comments that Bouffalant is using its head to absorb the attacks and because of that, it may not be receiving any damage. Iris wonders if there is a reason for him to just be standing around and giving no commands.

Pikachu prepares to use Electro Ball, as Bouffalant looks at Alder, stomps its foot, and with frustration tries to get his attention. Pikachu uses Electro Ball, as Bouffalant takes the hit and turns to look at Alder. Everyone realizes that Alder was sleeping the whole time, and is very surprised. Alder finally wakes up, and says that he was walking all night and didn't get much sleep. Bouffalant is disgusted that Alder was asleep that whole time. Alder tells Bouffalant to use Head Charge with Bouffalant refusing, and smacks Bouffalant on its back. Bouffalant uses Head Charge, while Pikachu prepares to dodge. Bouffalant stops before hitting Pikachu, turns around, and hits Alder while sending him into a tree. Alder says that he expects nothing different from Bouffalant and that it was a great Head Charge. Alder decides that the battle is over and that he lost. Alder says that he is hungry, so he doesn't want to battle anymore. Trip asks about his battle, as Alder says that it will happen another time. Iris says that it's no excuse for him not to battle Trip.

Trip tells him that he followed Alder's advice and studied it hard, and asks him if it was the right thing for him to do. Alder tells him that seeking strength isn't what he meant. Alder can't remember if he ever told Trip that advice. Trip says that he has wasted his time, and that he will follow the path that he believes in. He says that he will aim to become a Pokémon champion, and explains that to become a champion he has to become the strongest trainer. He says that his victory will prove everyone that he is right. Alder goes up to Bouffalant and hands it an apple to eat. Bouffalant eats the apple and licks Alder's face. Ash says that despite fighting earlier, Alder and Bouffalant are very close to each other. Alder's stomach growls, as they decide to go and eat at the Pokémon Center.

At the Pokémon Center, Alder is flirting with Nurse Joy. Several of Alder's fans are excited to see him at the Pokémon Center. Alder tells Nurse Joy that he likes her over Officer Jenny. Iris reminds Alder that he had just been flirting with Officer Jenny earlier. Alder asks Nurse Joy if she will go out to eat with him. Ash and Alder eat their meal, as Cilan and Iris appear to be looking at them strangely. Alder and Ash ask them why they are not eating. They explain that Alder's fans have gathered which makes eating difficult while the fans are staring at them. Alder tells the kids that he'll sign autographs after they are done eating, and that they should wait outside.

A Gigalith breaks mirrors and breaks banners, as Officer Jenny tells everyone to get back since it is very dangerous. Alder shows up and brings out his Bouffalant to hold Gigalith back, so that the other people can run away. Ash and his friends arrive outside, as Ash scans Gigalith with his Pokédex. Alder tells Officer Jenny to back away, and that if he fails that he'll count on her. Alder comments that Gigalith is very agitated, as he walks up to it and offers an apple. Alder says that Gigalith will stop before running into him. Gigalith charges and hits Alder, sending him into a pole. Officer Jenny brings out Herdier to handle the Gigalith. Herdier tries to use Shadow Ball, but Bouffalant stands in front of it, so that it can't attack. Officer Jenny tells Alder to stay back, but Alder says that being sent flying allowed him to see what was bothering Gigalith.

Gigalith charges at Alder again, as he lifts Gigalith up and throws it into the air and upside down on the ground. Alder apologizes to Gigalith and says that he had to do it to make it easier to fix the problem. Alder pulls a nail out of its foot, shows it to everyone, and uses a potion on Gigalith's foot. Alder explains that Gigalith was rampaging because it was in so much pain. He rubs Gigalith's head and tells it not to be scared as he feed it a crystal stone. Cilan comments that being heroic and delicate took a lot of years to develop. Officer Jenny tells Alder to step away from Gigalith. Officer Jenny explains that because it caused so much destruction, they have to guard it in and supervise it. Alder tells her that Gigalith won't rampage anymore.

A pole begins to fall, as Gigalith jumps in to take the hit to be able to protect Officer Jenny. She thanks Gigalith for saving her, as Alder explains that Gigalith are gentle as long as nobody does anything to them. Officer Jenny decides that Gigalith can go back into the wild. Gigalith leaves and heads into the forest as everyone waves good-bye to it. Ash tells Alder to continue where he left off at the Pokémon Center. Alder says that he shouldn't only want to be strong, but to want people who watch his battles to like Pokémon. He wants Pokémon to like people as well. Alder says that he wants to see separate things like people and Pokémon respect each other and are able to be together. He explains that there are many types of trainers, those who only strive for strength, and those who are satisfied as long as they are with their Pokémon. He says that Ash should find his own answer by continuing his journey.

As the sun sets, Everyone tells each other to be careful on their journey. Cilan says that if Alder keeps being reckless, that he'll injure himself. As they go their separate ways, Alder asks them to give Trip his regards the next time he sees Trip. 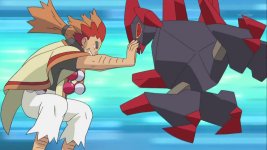 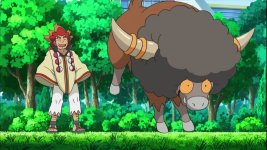