Guarding the Guardian of the Mountain! 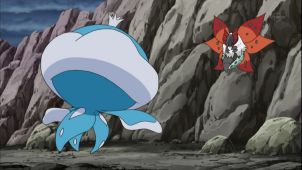 Ash and his friends walk down a road towards Icirrus City. Cilan says that if they continue down the pathway, they will be very close to Icirrus City. Ash is very excited about his upcoming Gym match in Icirrus City, as he wonders what type of Gym it is. As they are walking down the pathway, two large boulders fall off of the cliff towards them. They run away from the boulders, as Brycen and his Beartic come down from the cliff and destroy the boulders with a strong kick. Ash thanks Brycen for saving them. Iris notices Beartic and becomes terrified of it. Cilan recognizes Brycen as a movie star, and says that he is a big fan of Brycen's. Cilan tells Ash that Brycen is a movie star from Martial Arts movies.

Cilan begins his "It's Movie Time" ritual. He says that Brycen made his debut in the movie "Freeze Beartic," and that it was very popular. He says that it was the first Martial Arts movie with fights that was very popular. Cilan is glad that he is able to meet both Brycen and Beartic that are in the movies. Cilan says that they had three very famous movies, and that he has watched all three of them. Iris asks what the movie is about, as Cilan explains that in the movie a Martial Arts tournament was held on an island where Brycen fought against a Beartic. Both Beartic and Brycen gained respect for each other after the tournament and became friends. At the end of the movie, they join forces to defeat the evil organization. Cilan says that Brycen quit before the sequel was made and didn't appear before his fans again.

Ash asks Brycen why he's in the mountains, as Brycen says that he is continuing to train with Beartic. Ash and his friends introduce themselves, and Brycen introduces himself as well. Brycen says that the rocks that fell down may have been caused by hunters. Brycen explains that the mountain is not just a dormant volcano, but also a Pokémon Reserve. He says that Pokémon hunters appear occasionally on the mountain, and that he kicks them out once he finds them. Ash asks Brycen what type of training he does in the mountains, as Brycen tells them that he will demonstrate the type of training that he does. Ash asks if he can train with Brycen, as he brings out Krokorok to train as well.

Brycen and Beartic jump off of a cliff and dive into water by a waterfall, before jumping onto a rock and posing. Ash is ready to do the same, but Krokorok is too scared since he does not like water. Ash tries to push Krokorok off of the cliff into the water, but Krokorok moves out of the way and Ash falls into the water. Ash realizes that without a lot of training, they will be unable to do any of the hard training that Brycen is able to do. Iris asks Brycen why he stopped appearing in movies. Brycen says that there was an accident when they were shooting the movie, that was due to his lack of training. He says that it is why he decided to once again train with his Beartic.

Ash and his friends were very impressed by how powerful Beartic is. Volcarona flies away, as the sky clears up. As the sun sets, Officer Jenny shows up to arrest the hunter, as she thanks him for his help. Officer Jenny says that they've been having a lot of problems with dangerous hunters, as Brycen says that he just wanted to chase them away. Officer Jenny drives away with the hunter, as Ash thanks Brycen for his help with training and battling. Brycen asks Ash where they are heading towards, as Ash tells him they are going to Icirrus City. Brycen points out where Icirrus City is, as Ash is excited about his next Gym match. Brycen introduces himself to Ash as the Icirrus City Gym Leader, which surprises Ash. They shake hands, as Brycen says that he is looking forward to their match. Cilan says that he would've never known that Brycen was the Gym Leader. Ash and his friends head towards Icirrus City for Ash's next Gym match. 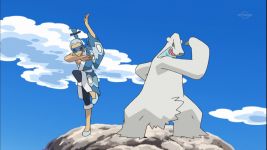 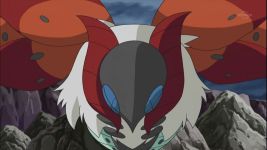