Clash of the Connoisseurs! 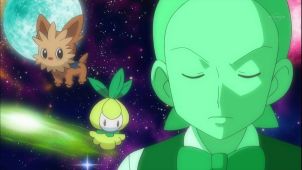 After defeating Brycen at the Icirrus City Gym, Ash is psyched about going to Opelucid City for his 8th badge. Nurse Joy comes out of the Pokémon Center to inform them that she received a phone call and that the Opelucid Gym is closed right now. She says that the Gym will be closed for quite awhile, as a fancy car shows up behind them. A butler comes out of the car and says that Cilan is being invited by Hattori, as he throws Cilan, Iris, and Ash into the car and drives off which leaves Nurse Joy very stunned. The butler explains that Hattori is seeking excellent Connoisseurs for their help, as Cilan asks him what they are needed for. The butler says that they should ask Hattori that question, as Iris and Ash say that they are okay with Cilan helping Hattori out.

As they arrive at the mansion, they see Burgundy trying to get inside of the gates. Burgundy tells Cilan that she is trying to get inside, but they won't let her in. The butler tells Burgundy that only Connoisseurs that are A-Class or higher are being requested by Hattori. Burgundy angrily reminds Cilan that she is still a C-Class Connaisseuse, as the butler says that it isn't enough to get inside. The care goes inside of the gates, as Burgundy runs into them while trying to get inside. As they arrive at the mansion, Momocchi is shown swinging on a swing, as a Sweet Scent is shown around her. Hattori calls Momocchi's name, as she says good bye to someone before going to him. Hattori tells her that some Pokémon Connoisseurs are arriving soon. Hattori looks over, as bushes began rustling.

The butler brings Ash and his friends inside of the mansion, as spotlights shine down on them. Pinot Noir introduces himself as an A-Class Connoisseur. He says that A-Class Connoisseurs have outstanding intelligence, stamina, observant eyes, expressiveness, and have an excellent degree certified by the Pokémon Connoisseur Association. Pinot Noir and Cilan greet each other and shake hands, as Pinot Noir says that he has heard great things about Cilan. Pinot Noir smells Cilan's hand, as he says that Cilan appears to be inexperienced and unskilled still. The spotlights turn off, as Momocchi and Hattori are there to greet them. Cilan asks Hattori why they have been asked to be at the mansion, as Hattori says that they are there for Momocchi. Momocchi hides behind Hattori since she is very shy. The curtains open and reveal a large garden outside.

Everyone runs outside, as Ash scans Petilil and Whimsicott with his Pokédex as the Pokémon are sitting down. Hattori explains that he would like to give Momocchi her first Pokémon, as he says that it is wonderful that she will be getting a Pokémon that will be her partner for life. He says that he would like them to find a suitable Pokémon in his garden for her, as Pinot Noir says that it will be an easy task. Cilan says that Connoisseurs are supposed to help select a Pokémon, give advice on how to raise it, and choosing moves. Pinot Noir says that it is very basic for A-Class Connoisseurs, as he wonders if it's too difficult for Cilan. Cilan says that they need to find out a little bit more about Momocchi first. Cilan asks Hattori if he could ask Momocchi some questions, as he asks Momocchi what sort of Pokémon she plays with in the garden. Hattori says that Momocchi is friends with all of the Pokémon in the garden, as a voice comes out of nowhere that calls Cilan very naive.

Burgundy in disguise comes out of a bush, as the butler asks who she is and says that only those with permission can be on the property. She says that she is Taverne, a legendary S-Class Pokémon Connoisseur, which surprises everyone. She holds up a badge showing an S-Class Connoisseur symbol on it, and demands that they let her go. Cilan asks her why she said that he was very naive, as she says that choosing a Pokémon based off of questions is very naive. She goes up to Momocchi to sniff her, as Momocchi becomes very scared. Burgundy in disguise goes to smell the other Pokémon and brings the Lillipup over and says that it smells like the shampoo that Momocchi uses. She says that it is proof that Lillipup is Momocchi's favorite Pokémon, as Momocchi shows a disappointed face and Cilan notices that. Cilan says that they cannot necessarily come to the conclusion that Lillipup is Momocchi's favorite Pokémon just because it smells like her shampoo. Hattori admits that he washed Lillipup with Momocchi's shampoo.

As he is talking, a trainer playing ball with a Lillipup, a trainer dressed up as a Lilligant with a real Lilligant next to her, a trainer and a Gothitelle walk to a church were shown. Hattori says that he has a point and says it's tasting time, as Iris is disgusted that Pinot Noir does tasting times as well. Pinot Noir goes to Momocchi and says that a Pokémon for her must be cute, lovely, and gorgeous. Pinot Noir picks up the sleeping Petilil, as he says that pretty Grass Types, their cute appearance and the possibility of a gorgeous evolution makes Petilil worthy of being Momocchi's Pokémon. Hattori asks Cilan what Pokémon he thinks is most suitable for Momocchi, as Cilan says that neither Petilil nor Lillipup are suitable first Pokémon for Momocchi. This frustrated Pinot Noir, as he asks Cilan what he thinks the Pokémon should be. Cilan says that he isn't sure, as Pinot Noir thinks that Cilan is just saying that to reject his choice. Sparks fly between them, as Hattori suggests that they have a Pokémon battle and that the winner gets to choose the Pokémon.

Cilan and Pinot Noir agree to the battle, as Hattori is excited that there will be a Pokémon battle between two A-Class Connoisseurs in his backyard. Cilan thinks that the aroma that came from Momocchi was a different scent from Lillipup and Petilil. He says that it is a green and fresh scent that one smells when a breeze sweeps over grass fields. He thinks that it's the aroma of a Grass Type Pokémon, and that there was a scent of a another type of Pokémon. Cilan thinks about all of the dual-typed Grass Pokémon in the garden, as he realizes that it was a much sharper scent than what they would produce. The aroma comes towards Cilan, as he decides to follow the scent. He crawls on the ground before hitting his head on a swing. Cilan notices the pink spores on his finger, and realizes what the Pokémon really is. Iris and Ash show up to tell him that the battle will start soon and wonder what he is doing, as Cilan asks them to do him a favor.

Hattori tells Momocchi that he thinks Petilil would be a great choice for her, and that they should want Pinot Noir to win no matter what. The butler says that it will be a one-on-one Pokémon battle. Burgundy appears out of the bushes, as she says that she cannot miss a battle between two A-Class Connoisseurs. Pinot Noir brings out his Purrloin, as Cilan becomes shocked and terrified. Pinot Noir wonders if Cilan dislikes Purrloin, as Cilan shakes and says it's nonsense. Cilan says that he will use frontal attacks, as he brings out his Crustle for battle. Pinot Noir says that bringing out a Rock/Bug Type Pokémon to battle the Dark Type Purrloin is the standard reaction. Cilan says that a Pokémon Connoisseur has to follow the basics, and to teach the correct raising methods and move choices. Pinot Noir says that a C-Class Connoisseur could do that as well, which makes Burgundy angry. Burgundy says that Pinot Noir is a jerk and that they need to both lose, as she turns away.

Crustle uses X-Scissor, while Purrloin swiftly dodges the attack. Pinot Noir says that his Purrloin's speed and power surpasses that of Liepard. Purrloin uses Sand-Attack to send sand into Crustle's eyes, and then hits it with Fury Swipes. Hattori says that it looks as if they won't have to worry, and that her first Pokémon will be Petilil. Meanwhile, Ash, Pikachu, and Iris search around for the Pokémon that Cilan asked them to find. Pinot Noir says that even though Crustle was a good choice and follows the basics, it is a boring and ordinary tasting. He says that an A-Class Connoisseur needs to be unpredictable. Crustle uses Shell Smash and Purrloin approaches with Night Slash, as Crustle dodges the attack which shocks Pinot Noir and Purrloin. Crustle uses Rock Wrecker to knock out Purrloin, as the rock also hits Burgundy and sends her flying into the air.

Ash heard the noise, as Iris says that they have to continue searching like Cilan told them to. Cilan wins the battle, as Pinot Noir returns Purrloin to its Poké Ball. Cilan asks Pinot Noir what he thinks of Crustle, as Pinot Noir admits that Cilan was right about it and that it hid an unexpected flavor. Hattori claps and then tells them that it was a great battle. He asks Cilan what Pokémon that he recommends, as Cilan says that Momocchi's 1st Pokémon shouldn't be chosen based on appearance and shape but whether it is a perfect match for her character. Hattori says that it is the reason why he asked for an excellent Pokémon Connoisseur, as Cilan says that Momocchi has a Pokémon that she already has her heart linked to. Hattori and Pinot Noir are shocked, as Hattori says that it's the first time that he has heard about that.

Hattori asks her if it is among the garden Pokémon, as she shakes her head no. Ash and Iris arrive with the Pokémon, as Cilan points out that the Pokémon most suited for her is Foongus. Foongus happily jumps towards Momocchi, as she happily catches it. Pinot Noir and Hattori were disappointed with her choice, as Cilan says that the aroma coming from Momocchi was that of a Grass Type and a Poison Type Pokémon. He says that there are no Poison Types among the garden Pokémon. He says that he searched for a Grass and Poison Type Pokémon after realizing that. Momocchi says that when she was playing on the swings in the backyard, the Foongus showed up on the swing and made the swing move with its spores. She says that from that point on, they continued playing together. A flashback was shown of her meeting Foongus for the first time.

Momocchi says that she wouldn't tell Hattori because he doesn't like Foongus, as they apologize to each other. He says that he is okay with her choosing the Foongus. Pinot Noir is very impressed that Cilan was able to figure it out and admits that he lost, as they shake hands. Pinot Noir says that next time he won't lose, and Cilan says that he won't lose. Before they leave, Cilan thanks Hattori for having them while Momocchi says that she should be the one thanking Cilan. She says that she will raise Foongus into a great Pokémon and go on a journey with it which makes Hattori cry in joy. The butler tells Ash that there is a Gym down the canal in Virbank City that he should go to. Cilan excitedly tells Ash that he should choose that city for his Gym match, as Ash decides that he will challenge it. Ash and his friends drive off in the car, as they head towards Virbank City for Ash's next Gym match. 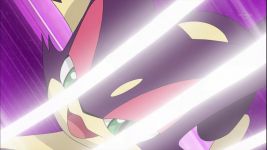 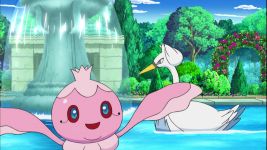