Piplup, Pansage, and a Meeting of the Times! 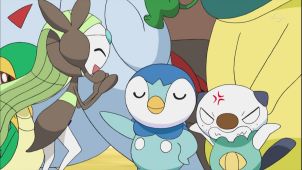 Ash and his friends head toward Cynthia's Villa, as Team Rocket follows them. They look out the window, as they see a couple of Rattata running by. Meloetta sits on Ash's lap, as she appears in front of everyone. They realize that Meloetta has the ability to turn invisible and has followed them. Cynthia says that Meloetta must really like Ash. They arrive at Cynthia's Villa, as Meloetta turns invisible again. Cynthia thinks that Meloetta is very shy, as they enter the Villa. Dawn sneaks up on Ash, as they are glad to see each other after a long time. Dawn congratulates Ash for winning all eight Gym Badges. Dawn introduces herself to Iris and Cilan, as they do the same.

Dawn tells Iris and Cilan that a Coordinator shows off the abilities of their Pokémon, as Cilan says that he wants to see Piplup in a battle. Cilan says to Dawn that he is an A-Class Connoisseur, and will show her his skills. Dawn scans Axew with her Pokédex, as Iris asks Ash to do the same on Piplup. Ash scans Piplup with his Pokédex. Dawn says that she came to East Unova since she heard about the Tournament. She says that she went to see a musical in Nimbasa City, and an Elesa fashion show. Ash calls out to Meloetta for her to meet Dawn, but it is too shy to come out. Ash decides to show Dawn his new Pokémon and introduce them to her own Pokémon.

Ash, Cilan, and Iris bring out all of their Pokémon, as Dawn introduces herself to them. Dawn brings out her own Pokémon, as they get acquainted. Buneary shows her affection to Pikachu, as Oshawott is shocked by this since he fell in love with her when she walked by. Oshawott's Scalchop falls, as Piplup puts it on his head and it falls down again with Oshawott laughing. Oshawott tries to pick up the Scalchop, but Pachirisu kicks it away and Oshawott goes after it. Iris notices that Buneary is in love with Pikachu. Ash asks to have a battle with Dawn, as he says that they will be participating in the tournament as well. Dawn says that she will also be participating in the tournament. Ash asks Meloetta to show itself, as it appears and Dawn introduces herself to it.

Piplup falls in love with Meloetta, which makes Oshawott very angry. Ash tells Dawn that Meloetta is a legendary Pokémon, and is very shy. Piplup pushes Oshawott away while talking to Meloetta, as Oshawott becomes furious and hits him with Aqua Jet. Ash yells at Oshawott, and tells him to apologize to Piplup. Oshawott apologizes, and then they become mad at each other. Everyone notices that they both love Meloetta and are rivals in love. Ash wants to battle Dawn, but Cilan wants to battle her first so he can evaluate her. Dawn decides to battle Cilan first and battle Ash later. Cilan brings out Pansage, while Dawn brings out Piplup to battle and Piplup spins and lands on the ground. Dawn says that in a contest, how a Pokémon comes out of its Poké Ball is very important.

Pansage uses Bullet Seed, while Piplup uses Drill Peck to dodge the attack. Pansage uses Rock Tomb, while Piplup spins and uses BubbleBeam to break the rocks and make everything sparkle. Ash notices that it's a defense shield. Cilan begins his Tasting Time ritual, as Dawn looks very confused about it and Iris is annoyed by it. Pansage uses Solar Beam and Piplup uses Ice Beam, as both attacks collide and create a shower of sparkles. Meloetta likes the sight of it, as it moves onto the battlefield and circles around. Iris liked seeing the contest moves. Oshawott comes out of his Poké Ball and is very angry at Piplup after seeing him dancing around with Meloetta. Jeremy says that the battle is over now. Team Rocket decides to tell Dr. Zager that Meloetta is now a part of Ash and his friends.

As the sun sets at the Villa, Iris says that she wants to battle Dawn, while Cilan says that they haven't finished their battle yet. They hear Meloetta singing the Relic Song, as they enjoy listening to it. Team Rocket listens to Meloetta's song on a machine in a boat with Dr. Zager. He says that it isn't enough, since right now Meloetta is in a peaceful state. They decide to let Meloetta stay with Ash and his friends longer and report the information to Giovanni. 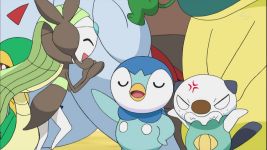 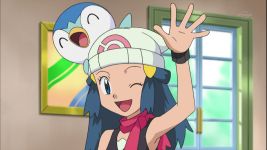