Dragalge, The Mock Kelp Pokémon. This vicious Pokémon sprays a poisonous liquid on opponents that come near. For whatever reason, it gets along really well with Dhelmise. It blends in with seaweed to ambush its prey and then takes them down with a poisonous liquid strong enough to melt metal.

Dragalge is an interesting Pokémon with a lot of flexibility and some strong points on its side. Having one of the best offensive abilities in the game in Adaptability, allowing it to apply pressure even being a defensive pivot. However Dragalge does lack in some areas, namely the offensive side lacking the Speed and power to truly abuse Adaptability. Overall, Dragalge is a powerful Pokémon in RU and can find a home on most team styles.
Positives
Typing - Dragalge has unique typing allowing it to hit Fairies with a super effective STAB move giving it a large edge over other Dragons in tier such as Druddigon. Dragalges Poison typing also brings a nice advantage with the ability to sponge up Toxic and Toxic Spikes. Also the Dragon typing cannot be understated in low tiers, especially with Dragalges defenses. This allows Dragalge to pivot into Fire, Water, and especially Grass threats in the tier and apply pressure via its powerful STABs or set up Toxic Spikes

Negatives
Speed - Dragalge has really low Speed, meaning that it can easily be outpaced. Unlike some of the last few POTWs we`ve done recently Dragalge at least has bulk but it's also weak to common types, namely Ground. This makes Dragalge easy to revenge kill for a lot of threats in the tier or bulky Grounds to just check it

Adaptability - STAB multiplier becomes 2x (1.5x normally) - This is an amazing ability as a free bonus to STAB is really strong, as Mega Lucario has shown. Dragalges best ability hands down
Poison Touch - 33% chance to poison on contact from the user - Like Poison Point but the users attacks instead of the opponents, equally bad to Poison Point
Poison Point - 33% chance to poison on contact from opponent- Overall a weak ability, especially when Adaptability is on the table

Offensively Dragalge applies a lot of pressure with its STAB moves. Draco Meteor hits incredible hard but drops Dragalges Special Attack making it good to hit and run while Sludge Wave is more consistent damage. Hidden Power Fire is needed to check Steel threats such as Escavalier that would otherwise wall it. Last slot is open to with Toxic Spike to set up hazards to help the team out or Focus Blast to also help with Steel types, hitting most harder than Hidden Power Fire does.

Dragalge base stats lend it to being an offensive pivot to the team. Draco Meteor just brings too much power to the table to pass up while Sludge Wave is just strong consistent damage. Toxic Spikes are a must on this set as Dragalge creates the space to set up the hazards easier than on the offensive set. Last slot is open to Scald to cripple physical attackers as well as Ground threats that switch in such as Rhydon while Dragon Tail is nice to phase out boosting threats that try to boost up on it.

-Icium Z + Haze - Icium Z allows Haze to not only remove stat boost, making it a nice option on the pivot set, but also fully heals Dragalge. However this means giving up the passive recovery of Black Sludge making it a tough choice.

Pangoro - With Pangoros ability to Pursuit trap Psychic threats, namely Slowbro and Slowking that are common answers to Dragalge making it a strong choice for both sets, Pangoro makes the team a bit more offensive when building so bare that in mind.
Flygon - Working better with the offensive set, but works well with the defensive, Flygon loves the Poison types that Dragalge draws in with its typing and Toxic Spikes, giving Flygon a free turn to set up Dragon Dance and go for a sweep.
Dhelmise - Helping more with the defensive set, Dhelmise acts as a spinblocker for Dragalge, stopping Rapid Spinners from removing Toxic Spikes as well as pressuring Ground threats to Dragalge. Dhelmise also has good match ups into common defoggers in tier such as Gligar and Mantine.

Steels - Steel threats are the best and easiest way to handle Dragalge as it can use either of its STAB moves effectively. Steels like Bronzong and Escavalier can easily beat the pivot set switching in without a lot of concern, however Escavalier hats the burn of Scald. Escavalier also has a hard time with the offensive set as Hidden Power Fire will roast it.
Special Defensive tanks - Special Defensive tanks are a strong answer to Dragalge but some are locked to defensive teams. Snorlax is the most flexible, able to sponge hits and counter back with Earthquake or Return for a lot of damage. Snorlax also has access to Pursuit to chip away at it as Dragalge goes to switch out. Umbreon is one of the best answers as it can just heal off status from Toxic Spikes with Heal Bell. However Umbreon can't do a lot back to Dragalge as it lacks the power to break through it.

In LC, Skrelp is a powerhouse wallbreaker having near perfect coverage with its STAB moves. Hydro Pump hits the hardest but has shaky accuracy while Sludge Wave has much better accuracy but less power. Hidden Power Fire allows Skrelp to get around Ferroseed as well as hit Croagunk decently which Hidden Power Psychic just destroys Croagunk as well as hits other Water/Poisons. Last slot is a utility slot, Toxic Spikes are nice for residual damage while Scald has better accuracy than Hydro Pump and a 30% chance to Burn. Evs are important here for survivability as it allows Skrelp to like an Earthquake from Drilbur and Diglett, as well as Abras Psychic.

Magnemite - With Magnemites ability to trap Ferroseed, this frees up Skrelp to run Hidden Power Psychic to push through Croagunk and other Poison types.
Diglett - Similar to what it does as a check, Diglett can check Croagunk for Skrelp with Arena Trap as long as it comes in after something is KOed and there are no hazards to break its Focus Sash.

Diglett - With Arena Trap, Diglett can come in after Skrelp KOs a Pokémon and, as long as there are no hazards, tank a hit with Focus Sash and KO Skrelp with Earthquake.
Munchlax - Like Snorlax for Dragalge, Munchlax can wall Skrelp quite well with Berry Juice or Eviolite. Munchlax also applies pressure back with its powerful Returns and Pursuits. 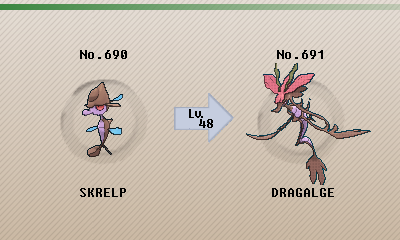