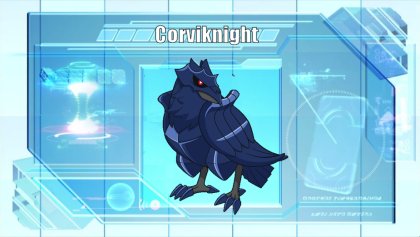 Corviknight, The Raven Pokémon. This Pokémon reigns supreme in the skies of the Galar region. The black luster of its steel body could drive terror into the heart of any foe. With their great intellect and flying skills, these Pokémon very successfully act as the Galar region's airborne taxi service. Imbued with Gigantamax energy, its wings can whip up winds more forceful than any a hurricane could muster. The gusts blow everything away. The eight feathers on its back are called blade birds, and they can launch off its body to attack foes independently.

It's really hard not to avoid comparisons between Skarmory and Corviknight. While Skarmory is a more rare Pokemon, Corviknight is arguably the best basic route birbs we have ever received from Game Freak. Unlike Skarmory, Corviknight has a more expansive movepool, higher offensive stats and it's bulkier from the special side. This allow it to act as an excellent pivot on 6v6 Singles and even as a self-sufficient sweeper on 3v3. Having access to Roost and U-turn means that it can recover its own health and even regain momentum out of unfavorable match-ups.

However, Corviknight does have some weaknesses of its own. Because it can only carry 4 moves, Corviknight has difficulty fitting each and every move meaning that it will most likely end up with only one move that can cause it being walled by some Pokemon such as Bisharp or Volcarona. Due to its slower Speed, it can get easily trapped by Magnezone. While it's Attack is higher than Skarmory's it is still not good enough to deal damage to threats such as Ferrothorn..
Positives
It's Steel/Flying typing along with its 98/105/85 bulk grants Corviknight great defenses along with a fantastic typing.
Access to two great abilities in Mirror Armor and Pressure makes Corviknight an amazing Pokemon to use. Pressure easily depletes the PP of the opponent and in combination with Roost, it will easily have no issues getting rid of moves like Stone Edge if they came from slower opponents. Mirror Armor deflects any opposing stat decrease which works great against Dynamaxed opponents since it returns their side effects.
Access to moves such as U-turn, Defog and Bulk Up allows Corviknight to distinguish itself from Skarmory. Unlike it's Johto counterpart who focuses more on phazing and setting up hazards, Corviknight is a gret pivot capable of removing them or even attempt a sweep with Bulk Up. It's stronger offensive presence allows him to pull it off.
In 6v6 formats, Corviknight is not prone to hazards which means that Knock Off doesn't punishes it as harshly as it does for Zapdos and it can still come repeatedly to remove hazards.
Negatives
Because Corviknight has too many options, it will struggle to fit everything on one moveset and will usually end up relying on a single offensive move that makes it hard to check the opponent's depending on the attack it is using. If it is using Body Press instead, Corviknight will struggle with Rillaboom. If it's using Brave Bird instead, Bisharp becomes an issue.
It's weakness to Fire and Electric becomes an issue as it will be easily forced out by strong special attackers such as Heatran, Zapdos and Tapu Koko.

DYNAMAX:
This Corviknight wants to focus on supporting its team as much as possible. Therefore, unless you are preventing a sweep, you shouldn't consider Dynamaxing this set.

Partners:
Many team archetypes appreciate Corviknight as a Defogger thanks to its strong defensive presence and pivoting ability. Defensive teams greatly appreciate its longevity and ability to take Knock Off, while more offensive teams take great advantage of its pivoting. Pokemon that are immune to Electric attacks like Garchomp, Hippowdon and Landorus-Therian are Pokemon that Corviknight can succesfully partner with. These are also Pokemon that can force Heatran out as otherwise Corviknight has no way around it. Strong wallbreakers such as Tapu Lele, Urshifu-R, Bisharp, and Dragapult appreciate Corviknight's slow pivoting with U-turn getting them in safely.

Bulk Up and Roost are the key moves on this set as it allows Corviknight to stay as long as possible throughout the match. Bulk Up allows Corviknight to raise both its Attack and Defense allowing it to deal more damage while it increases it's already great physical Defense. Brave Bird becomes Corviknight's main STAB and it will hit very hard against passive opponents. Substitute protects Corviknight from status ailments and maintains it safely from enemy attacks. If Substitute is not needed, Corviknight can use Iron Head as a secondary STAB, which allows it to hit Terrakion and Tyranitar for super-effective damage.

DYNAMAX:
If Corviknight is able to grab a few boosts, using Dynamax can improve its chances of sweeping a weakened team. It's much more preferable for Corviknight to use its regular Dynamax form over its G-Max form because of Max Airstream which increases its Speed. While Corviknight is not particularly fast, it can definitely use the speed boosts. Despite being a set that could take advantage of Dynamax, is it not recommended for Corviknight to being used as your main Dynamax sweeper.

Partners:
Corviknight appreciates Pokemon like Garchomp who can set up Rocks for it while cover for its weakness to Electric types. Garchomp is also capable of scaring Heatran away. Galarian Slowking and Blissey are two strong special sponges that are able to deal with the Pokemon that prevent Coriknight from sweeping such as Zapdos and Volcarona. It is also worth mentioning that Nidoking is an excellent partner who is able to beat down Zapdos and Heatran.

Other Options:
Corviknight can effectively use Iron Defense + Body Press to sweep opponents on its own while holding up against sweepers such as Kartana, Bisharp and Mimikyu. This makes Corviknight unable to use other offensive moves though.

Strong specially based Electric types such as Tapu Koko, Zapdos and Thundurus are capable of frying Corviknight's wings and removing it from the field. Magnezone deserves a special mention as it is often EV'd to outspeed it and it can easily remove it with Specs Thunderbolt.

Fire types like Heatran, Cinderace and Victini are all capable of threatening it with their super-effective moves. While Heatran has to be wary of switching into Body Press, it resist Brave Bird making it a solid counter who can toast it with Magma Storm or Flamethrower. Victini's V-Create will simply send Corviknight to the shadow realm.

Strong special attackers like Choice Specs Dragapult and Tapu Lele with super-effective moves will usually be able to pressure Corviknight and take a big chunk of its health. Although these Pokemon have to be wary of switching into Brave Bird.

Chip damage from hazards or contact from Rocky Helmet/Iron Barbs will make Corviknight easy to pressure throughout the match and if it keeps getting forced out before being able to use Defog, it makes it harder for Corviknight to check the Pokemon it is supposed to do so with the extra passive damage. 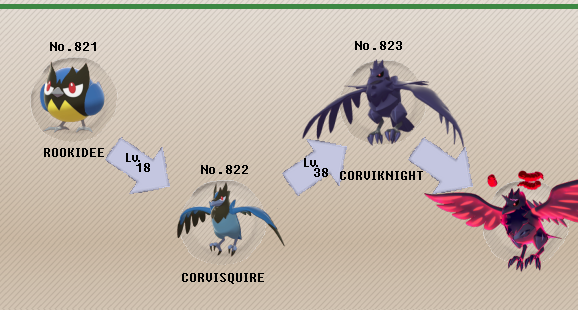