Delphox, The Fox Pokémon. It gazes into the flame at the tip of its branch to achieve a focused state, which allows it to see into the future. Using psychic power, it generates a fiery vortex of 5,400 degrees Fahrenheit, incinerating foes swept into this whirl of flame.

Every generation we get three new starters, and it always seems we get one that manages to fail at practically everything. This time we have Delphox. A Pokemon with many common weaknesses, a limited movepool, and a useless ability. It has okay offensive stats. Don't take it the wrong way, Delphox is built to be a special sweeper, and it does this job well. Let me explain why something with such good offensive stats and amazing design is bad. Let's get started...
Positives
- 114 Special Attack lets Delphox hit extremely hard. You can't ignore Fire Blasts of that power.
- 104 Speed is certainly decent. Maybe not quite up to par as much as it used to be, but it gets the job done.
- Resistant to most common forms of priority moves. Bullet Punch, Mach Punch, and Ice Shard will not stop you.
- It has some tricks up its sleeve (pun intended) with Magician, Switcheroo, Will-o-Wisp, and Hypnosis.
Negatives
- Terrible offensive movepool for an offensive Pokemon. Fire Blast / Psychic / Grass Knot is basically the extent of what it gets. Shadow Ball and Hidden Power if you want to scrape the bottom of the barrel, but it really doesn't get anything else.
- Great defensive movepool on something that can't really use it. Wish, Mystic Fire, Light Screen etc are all really nice, or they would be on something that had more usable bulk.
- Stealth Rock weak. It loses a quarter of its health just switching in.
- Ghost weak. Mega Gengar guarantees that Delphox will not last long.
- Dark weak. Pursuit is a hassle.
- Almost incapable of touching Latias, Latios, or Heatran.

Blaze: When HP is below 1/3rd, Fire’s power increases to 1.5 times. Actually very good on Delphox. If you get a Calm Mind boost alongside Blaze you can take down a Blissey in two hits. That's strong.
Magician: The Pokémon steals the held item of a Pokémon it hits with a move. Your first thought might be "Fire Gem + Magician" to do extra damage and steal an item in a single turn. Sadly Delphox can't even do this. Magician doesn't work when you have an item meaning you have to attack TWICE to make it work..

What does the Delphox say?

I've talked down on Delphox a lot but lets talk about something it actually does well. Offensive Calm Mind sweeping. After a Calm Mind Delphox's Special Attack reaches fearsome levels while its Special Defense becomes good enough to survive Draco Meteors and Hydro Pumps. Fire Blast massacres almost anything that doesn't resist it, 2HKOing even Blissey after a single Calm Mind with either a Blaze or Drought boost. Psyshock covers things such as Terrakion, Tentacruel, Keldeo, Mega Venusaur, Gastrodon, and even the most defensive of Blissey. HP Fighting cripples Tyranitar, Hydreigon, and deals heavy damage to Heatran. Hidden Power Ice hits Latias / Latios / Dragonite / Garchomp but doesn't hit much else. Grass Knot is a final option, but won't hit much besides... Mega Blastoise? The major problem with this set is its incredible frailty. Yes, it hits hard, but it drops in one hit to any Choice Scarfer, dies to Mega Gengar, is annihilated by Pursuit, Stealth Rock weak, and has slight coverage problems. It is BARELY usable if its counters fall, but this isn't as easy as it sound as Delphox has such a massive number of them.

Delphox has a lot of power behind its mighty wand, and this set capitalizes on it. Specs Fire Blast has incredible immediate power taking out solid chunks of life from even things that resist it. Psyshock is your best option against Tentacruel and Mega Venusaur. Hidden Power Fighting will 2HKO most Tyranitar and some Heatran. Switcheroo is good for utterly screwing over Chansey or Latias who you can't seriously damage offensively. A major flaw with this set is that it is forced to switch in and out a lot, which magnifies Delphox's massive Pursuit and Stealth Rock weaknesses. Still, the sheer power is hard to ignore.

Flame Charge, Mystical Fire, Hypnosis, Grass Knot, and Wish.
A Life Orb set could in theory use Flame Charge instead of Calm Mind to act as a late game sweeper. The speed at +1 is so high being revenge killed is relatively difficult so you could on paper sweep late game fairly easily.
Mystical Fire is a cool signature move that is sort of like a stronger Fire type Icy Wind that cripples Special Attack instead of Speed. It would work better if Delphox wasn't awful defensively.
Hypnosis is okay to take a counter out for a little while, but the accuracy sucks and Delphox kind of struggles against the 4 moveslot syndrome as it is.
Grass Knot punishes Starmie but for the most part Fire / Psychic / Fighting covers everything else.
Wish + Mystical Fire could ALMOST work except Delphox is mostly targeted from the physical side, and its HP doesn't even make it that great of a Wish passer anyway.

It gets Heat Wave I guess, but pretty much nothing else. Earthquake, Surf, and Trick Room is too common here to make Delphox usable.

Assault Vest Tyranitar will take 59% max from Delphox Hidden Power Fighting... with Life Orb... after a Calm Mind... with a Critical Hit. In other words Tyranitar takes very little from Delphox's hits and can easily annihilate it with Pursuit. Stealth Rocks limits Delphox's switch ins to a mere 4 at best and opens it up to even things like Scizor's Bullet Punch once it gets weak enough. Latios and Latias resist every move Delphox carries and can just nuke it with Draco Meteor or Calm Mind alongside it. Choice Scarfers with Earthquake will usually survive a hit and can easily wipe it out. Azumarill tanks anything Delphox does and OHKOs with Aqua Jet. Mega Gengar can OHKO with Shadow Ball while Delphox can't even switch. Many, many bulky Pokemon like Garchomp, Zygarde, Heatran, Rotom Wash, and Chansey can take a hit and either KO, or status Delphox making it useless. Delphox is a powerhouse but is greatly limited by its typing and movepool. Countering it is less about planning for it, and more about switching in something that isn't Fire weak. 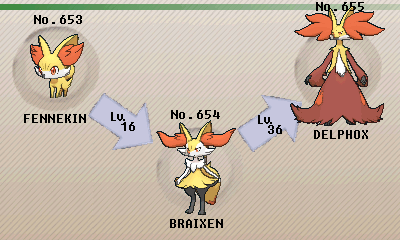