Aromatisse, The Fragrance Pokémon. It devises various scents, pleasant and unpleasant, and emits scents that its enemies dislike in order to gain an edge in battle. Its scent is so overpowering that, unless a Trainer happens to really enjoy the smell, he or she will have a hard time walking alongside it.

Aromatisse is a Pokémon that is really indicative of a shift that has been occurring for the past few years in official standings, the shift away from Single Battles to Double & Triples, and Aromatisse is a Pokémon that just feels like it was designed to fit in solely for that. It has some decent bulk and the fact it's one of but a few pure Fairy-types means that it could be tricky for people to counter. Its movepool is focused around it being a support Pokémon but in some circumstances, it really is a force to be reckoned with.
Positives
- Its typing is amazing, making it only weak to Poison & Steel-type moves, which are so uncommon. It also resists Bug-type, Dark-type and Fighting-type with an immunity to Dragon-type.
- It has got really decent Special Defense and moderate physical Defense, and decent Hit Points which allow it to withstand a few hits
- It has a decent support movepool
- It has very low Speed which allows it to work well in a Trick Room team...

Healer: At the end of the turn, there is a 30% chance of either Ally being healed from a status condition - A decent enough ability that can help in Doubles & Triples, but is relatively useless and outclassed by its Hidden Ability
Hidden Ability (Available):
Aroma Veil: Protects itself & allies from attacks that effect their mental state. - Aromatisse's signature ability, and it's quite a good one. This ability protects Aromatisse, and any partners in Doubles & Triples from moves such as Taunt, Encore, Attract etc. which is very, very useful in these times

The Fragrance of Kalos

This is a rather standard Aromatisse set and is self explanatory. Protect obviously protects you, allowing you to scout to see what the opponent will do. Wish is Aromatisse's recovery, and can even allow to be passed onto another Pokémon. With Aromatisse's Hit Points, this means a good amount of Hit Points will be recovered. Toxic will allow for you to be able to take down a Pokémon gradually, stalling where you can and Moonblast gives you a powerful STAB Fairy-type move, which is seldom resisted. Relatively simple, really.

Due to Aromatisse's Bulk, you'll be able to set up a Calm Mind and unleash the hell that is Fairy-type on various Pokémon. Moonblast runs the same as before while Psychic and Hidden Power Ground give coverage against a variety of Pokémon, including ones that have a chance of taking out Aromatisse and Wish can simply heal Aromatisse or any future Pokémon

If you do so wish, although it's typically left for Doubles, you could one a Trick Room set on Aromatisse in Singles, especially as it can't be Taunted. As such, when Trick Room is in effect, Aromatisse will very rarely not be the first Pokémon to move, so it will want to get in powerful hits, which is where the Life Orb comes in. Moonblast gets the beautiful STAB, with its added chance of lowering Special Attack if it doesn't KO a Pokémon. Energy Ball, Psychic & Thunderbolt give it decent coverage.

Aromatherapy, Aromatic Mist, Draining Kiss, Misty Terrain, Refresh
Aromatherapy heals all status problems on your side for Pokémon that are out. This is very useful, especially in Doubles & Triples now Dark Void is unbanned in official circles
Aromatic Mist boosts the Special Defense of all your Pokémon that are out. That's very useful in general.
Draining Kiss, while less powerful than Moonblast, gives you half the damage back. That's always useful, but may not be worth it.
Misty Terrain protects against status conditions for five turns, and is said to weaken Dragon-type moves too. Always handy
Refresh is a single battle alternative for Aromatherapy

Aromatisse is hands down, the most reliable Trick Room setter the game has to offer, as its Aroma Veil acts as a pseudo Oblivious for itself and its partners. Meaning it can't be taunted to prevent Trick Room, nor can it be Encored to punish using Trick Room.

Not only can Aromatisse use Trick Room, it can take advantage of it with its base 29 speed, out.. slowing Pokemon such as Mega Ampharos and Slowbro.

Its typing leaves it with two relatively uncommon attacking types in Poison and Steel, though Ferrothorn and Escavalier both outslow Aromatisse so a Fire Type Pokemon would be an ideal partner here.

Aromatisse has MANY ways to support its team, so there isn't a clear cut moveset to use with it, so the last two moveslots should be tailored to your teams needs. Here, I'll offer a suggestion to get you started.

What this set aims to do is set up Trick Room and then support its team/annoy the opposing team in various ways afterward. Safety Goggles will make sure Aromatisse isn't taking damage from weather, nor is it being put to sleep from spore or the random Sleep Powder. Leftovers is another option to keep the fairy healthy.

Because the set is specially defensive, Pokemon with Intimidate are welcome partners. Despite Aromatisse being immune to Taunt, I believe it should still carry an attacking move, because nobody wants to be in the position of having a perfectly healthy Aromatisse as their last Pokemon, staring down two very weak opponents without a way to deal damage.

Despite how well it functions in Trick Room, outside of it, Aromatisse will get pummeled very swiftly as base 101/72/89 defenses can only take so many hits.

What you'll want to do here, if you're unable to go with Super Effective moves, is go in for the physical hits. As physical Defense is Aromatisse's weakest, just hammering that will do wonders. If you have bulky Special Pokémon, you can just absorb Aromatisse's hits, as well, as it literally cannot do anything physical. Failing that, go for the Super Effective hits with Steel-type Pokémon like Scizor, Aegislash and Mawile or Poison-type Pokémon like Gengar. Mega Scizor's Bullet Punch is likely to destroy many an Aromatisse, even in a Trick Room. 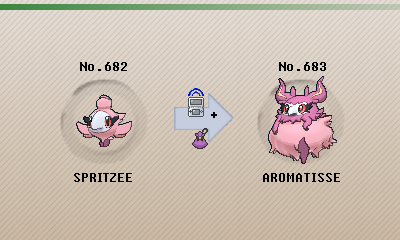