Battling the King of the Mines! 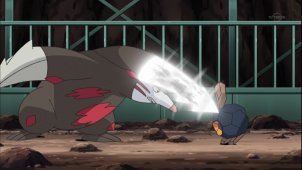 After obtaining many Revival Herbs from Milos Island, Ash and his friends arrive at the Driftveil City Gym for third time to ask Clay for a Gym battle. The Gym doors open as a worker comes out and Ash tells him that they brought the Revival Herbs that Clay had asked for, and that he promised to have a Gym battle with Ash. The worker lets them inside and takes them all of the way down the hall and to the elevator to the underground. They take the elevator all of the way down to the mining tunnel. As they are riding the elevator, the worker asks Ash if Pikachu is going to be battling in the Gym battle. Ash tells him that it depends on the Pokémon that the Gym Leader uses. The worker wonders if Pikachu will be able to prevail. The worker warns Ash that the Gym Leader's Pokémon are very powerful, as the worker laughs. As they reach the floor of the underground mining cave, Ash and his friends run through the cave to meet up with Clay. Ash sees Clay and gives him the bag of Revival Herbs. Clay picks a couple of them up, and says they are excellent herbs. Clay gives the bag of Revival Herbs to one of the workers and has him give them to everyone. Ash asks Clay to have a Gym battle with him, as Clay keeps his promise and accepts the request.

They walk up to a rocky door, as Clay takes his pickax, swings it, and presses the button with it to open the door to the battlefield. Iris and Cilan go to the spectator area to watch. The referee announces that it will be a 3-on-3 battle, and that only Ash will be able to switch Pokémon during the battle. Iris comments that the battlefield has a very unique atmosphere. Cilan says that Clay has a lot of confidence in his powerful Pokémon, and wonders how Ash will go up against that. Clay brings out Krokorok as Pikachu is pumped up and wants to battle it. Ash tells Pikachu that Krokorok is a Ground Type and that Electric Type moves have no effect on it. Ash says to Pikachu that Krokorok's attacks will be super-effective on him. Cilan says that Ash is right that an Electric Type Pokémon going up against a Ground Type Pokémon would not go very well. Ash brings out Oshawott to battle Krokorok.

Oshawott uses Aqua Jet, while Krokorok jumps on the rock wall and then dodges the attack with Dig. When Aqua Jet misses, Oshawott hits the wall hard. Krokorok jumps out of the ground and into the air to use Sandstorm, which hits Oshawott and causes sand to get into his eyes making it very hard to see. Cilan points out to Iris that Oshawott has got sand in his eyes. Krokorok uses Bite which lands a hit on Oshawott. As Oshawott prepares to use Razor Shell, the sandstorm gets more sand in his eyes. Because Oshawott has sand in its eyes, Oshawott is unable to land any hits on Krokorok. Krokorok uses Stone Edge, which lands a hit on Oshawott as he hits the ground hard. Sandstorm hits Oshawott, causing more sand to get into his eyes. Ash commands Oshawott to use Water Gun all around the field, and straight up to get rid of the sandstorm. Oshawott is finally able to see again after the sand is out of his eyes. Krokorok uses Dig, while Oshawott uses Water Gun through the hole which brings Krokorok outside of another hole. Oshawott uses Aqua Jet to send Krokorok into the air, and then uses Razor Shell to knock Krokorok out. Iris comments that they won because of the continuous use of super-effective moves. Cilan reminds Iris that it is only the first battle. Clay laughs and tells Ash that as a challenger, he is very gutsy, and that he shouldn't get carried away.

Clay brings out Palpitoad to battle. As it comes out of its Poké ball, Palpitoad roars loudly across the Gym. Iris says that it seems that Clay's Palpitoad is much stronger than Ash's Palpitoad. Cilan comments that Palpitoad is both a Water Type and a Ground Type, which will make the battle tough. Ash asks Oshawott if he can continue battling, and Oshawott hits his to say yes. Oshawott uses Water Gun and Palpitoad uses Hydro Pump, as the two attacks collide. Because Hydro Pump is much stronger, it hits Oshawott and sends him hard into the wall. Ash asks Oshawott if he's okay, as Oshawott is able to get back up. Oshawott uses Razor Shell, while Palpitoad uses Sludge Bomb which hits Oshawott and knocks the Shell away from him to the ground before Oshawott is able to use his attack. Oshawott picks up his shell, but Palpitoad uses Rock Smash to smash him into the ground and knock him out. Clay tells Ash that he thought he had guts, but he thinks that it is all Ash can offer. Ash reminds Clay that it is only one victory and one loss so far in the battle and that it has just begun. Clay says that Ash talks a lot. Ash thinks about what Pokémon would be strong against a Water/Ground Type.

Ash brings out Snivy for to battle. Iris comments that Snivy is a Grass Type, so it is strong against both a Water and Ground Types. Clay tells Ash that it was a smart choice, and that he will make sure to block the attacks. Snivy uses Attract, as Iris points out that it is not a Grass Type attack and Cilan says it's just like Ash to use an unexpected move. The Attract attack infatuates Palpitoad, as Snivy uses Vine Whip to hit Palpitoad. Snivy uses Leaf Blade, as Clay tells Palpitoad to pull itself together, but Palpitoad is still infatuated. Snivy uses Leaf Storm to send Palpitoad high into the air and back down to the ground to knock it out. Clay becomes very angry, while stomping on the ground and telling Ash that he doesn't like him. He tells Ash that he doesn't like battles with little tricks. Ash wonders why he is so angry, since it was his strategy to use Attract. Clay tells Ash that he should play fair and battle without the tricks since it isn't a strategy. Clay takes his hat, squishes it, and throws it to the ground. Clay says that his next Pokémon's power is much greater than that of his previous Pokémon.

Clay brings out Excadrill as he tells it that it must work on its day off. Excadrill lets out a loud roar after it comes out of its Poké ball. Cilan comments that Excadrill is a Ground/Steel Type and that things won't go as easily as they did before. Snivy uses Vine Whip, while Excadrill uses Rapid Spin to block away the attack. Snivy uses Leaf Blade as Clay says that weak attacks won't work on his Excadrill, while Excadrill again blocks the attack with Rapid Spin. Snivy uses Attract, but again Excadrill blocks the attack with Rapid Spin as it completely spins around while doing so. Snivy uses Leaf Storm, and again Excadrill uses Rapid Spin as it charges in to hit Snivy. Clay reminds Ash that weak attacks will not work on Excadrill. Excadrill uses Horn Drill to send Snivy into the wall and instantly knocking her out. Ash tells Clay that he wants to become a Pokémon Master and that he can't lose. Clay tells Ash that he is still naďve, and shows him his pickax.

Clay explains to Ash that when he was close to his age, that he and Excadrill were mining the cave they are in together with his pickax. He tells Ash that in the present time, young kids only think about becoming a Pokémon Master. He says that with how far he has come, and is called by others the "Mine King with a pickax," he can teach him how hard it is to work his way up. Ash tells him that he is not taking his goal lightly, and that he will show him that with his final Pokémon. Clay puts down his pickax and tells Ash that it's easy to say those things, but Ash must prove it in battle. Ash realizes that there is only one Pokémon he has that can endure Excadrill's attacks, and keep enduring them until they can fight back.

Excadrill uses Horn Drill, while Boldore is able to take the hit because of its Sturdy ability. Excadrill uses Drill Run, while Boldore catches the attack and their arms lock on to each other. They both try to take each other down to the ground, but are both equal in strength. Clay tells Ash that he is having fun in the battle. Boldore's red crystals begin to glow orange, as Ash has Boldore use its new move Rock Blast to hit Excadrill. Clay tells Excadrill to show some guts. Boldore's red crystals glow orange again, as Ash has Boldore use its other new move Rock Smash. Boldore uses Rock Smash, while Excadrill also uses Rock Smash, as the attacks collide which creates a shock wave across the field. Excadrill winces in pain, as Boldore uses Rock Smash to send it to the ground to knock Excadrill out. Ash wins the Gym battle, as he goes up to compliment Boldore. Boldore knocks Ash down and goes on top of him to show its affection for Ash, as Ash continues to compliment Boldore for doing a great job.

As the sun sets, Clay tells Ash that the battle was excellent and gutsy, as both of them shake hands. He tells Ash that he worked his way up from a regular miner, to an influential person in Driftveil City. Clay says to Ash that he should retain that battling spirit from the battle, and keep working hard towards becoming a Pokémon Master. Ash is handed the Quake Badge, as everyone celebrates by jumping into the air. At the Pokémon Center, Iris says to Ash that the battle was tough, and that she thought many times that it was over. Ash says that the win was due to the hard work by Boldore and the other Pokémon. Nurse Joy gives back Ash's Pokémon, and asks what he is doing next. Ash says that he is going to the next Gym to earn his sixth badge. Nurse Joy tells Ash that the closest Gym is in Mistralton City. Ash decides that they will head to Mistralton City next. 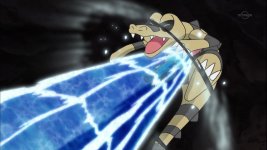 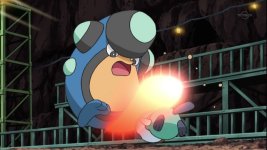