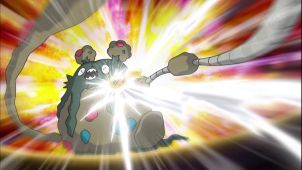 Pignite uses Tackle on Garbodor's arm to make it fall to the ground. Pignite uses Fire Pledge, while Garbodor uses its arm to block the attack. Garbodor sends Pignite flying, as he hits the ground hard. Garbodor uses DoubleSlap to hit Pignite, as Iris returns with a drum to cheer Ash and Pignite on. Pignite is finally able to dodge one of the DoubleSlap attacks, and uses Fire Pledge. Garbodor uses Hyper Beam to break through Fire Pledge and knock Pignite out. Ash returns Pignite to his Poké Ball, as Roxie doesn't want to use Poison Type moves anymore but Ash convinces her to give her best still. Ash brings out Palpitoad to battle next.

Garbodor's arm starts showing sparks, as it gets ready to use Gunk Shot. Iris grabs Cilan and does something to his face and body off to the side. Garbodor hits Pikachu with Gunk Shot to Poison him. Ash wonders if they can still win, with Pikachu barely able to stand. Iris and Cilan yell out to Ash, as Iris is in yellow while banging a drum and Cilan is in orange and banging another drum. Roxie tells Garbodor to use Venoshock, but Static takes effect and Garbodor becomes Paralyzed. Pikachu uses Thunderbolt to hit Garbodor. Garbodor uses Venoshock, while Pikachu uses Electro Ball to break through the attack and knock out Garbodor. Ash wins the Gym match, as Roxie returns Garbodor to its Poké Ball. Pikachu collapses, as Ash picks Pikachu up. Roxie walks up to Ash and hands him a Pecha Berry to give Pikachu so that he can recover from his poisoning.

Ash asks Iris and Cilan why their faces are covered in paint, as Iris and Cilan look at each other and laugh at each other. The crowd cheers Ash's name after the battle. Meloetta was watching the whole battle, as it leaves the Gym. Roxie gives Ash the Toxic Badge, as Ash celebrates the win with Pikachu. The episode ends with Ash displaying his Toxic Badge with Pikachu, and the other seven badges surrounding them. 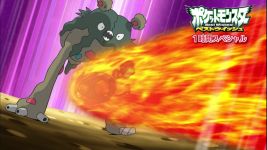 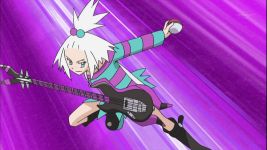