This update will be amended throughout the day so be sure to check back. If you have any ideas for the site, be sure to send them in
With the generation continuing and Worlds coming up, and the Chatroom has been rife with discussion while the WiFi Chatroom has been a place for battles, trades and Friend Safari hunting, so be sure to visit them. Our Forums have also had these discussion and are a bustling trade and competitive section for the games. Be sure to like our FaceBook Page.
Last Update: 10:26 BST 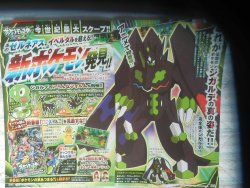 The first images from CoroCoro have leaked and have revealed some further details about Zygarde. Zygarde can take many forms. Normal Zygarde is at 50% and is called Zygarde 50% Forme. The dog like form is when it is at 10% and is called Zygarde 10% Forme. It has sharp teeth and speed. The blob is the cell, or Zygarde Core and becomes the brain of every form. The flat form is called Zygarde Cell. New large form is called Zygarde Perfect Forme and retains its Dragon/Ground-type. It is the Order Pokťmon and is 4.5m tall and 610kg and is said to exceed Xerneas and Yveltal in power. The new Anime series called Pokťmon XY & Z is to come with Mega Evolution Act 4 starting on October 29th. It also reveals a new look for Greninja, labelling it "Ash Greninja". The magazine mentions that it looks sort of like Ash's clothes
Edit @ 10:26: Created a temporary New Pokťmon Forms page for these Pokťmon. The page will be updated as further information comes and shifted to the game section of the first game involving these forms when it is announced.