This update will be amended throughout the day so be sure to check back. If you have any ideas for the site, be sure to send them in
X & Y have been out for months now, and the Chatroom has been rife with discussion while the WiFi Chatroom has been a place for battles, trades and Friend Safari hunting, so be sure to visit them. Our Forums have also had these discussion and are a bustling trade and competitive section for the games. Be sure to like our FaceBook Page.
Last Update: 14:53 GMT
Edit @ 12:01: Pokkén Tournament 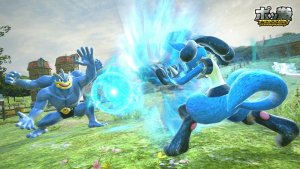 The Monthly Famitsu feat. stream has begun and is showing various details about Pokkén Tournament earlier than planned, which are to be added in this post as and when we get them so keep checking back.
Edit @ 12:07: Suicune & Gardevoir have been confirmed as a fighter in Pokkén Tournament
Edit @ 12:11: Pikachu has also been confirmed as playable
Edit @ 12:14: Rather than using a fighting stick, this game uses a controller with a standard D-Pad and BAYX button configuration
Edit @ 12:20: You can use support Pokémon to help you out in various matches. The field is full 3D and allows for fighting and avoiding as you see fit. When you get close to a Pokémon, then it will tighten up.
Edit @ 12:22: You press the L button to activate your Support Pokémon. You can also activate various powerful moves including Mega Evolution in combat.
Edit @ 12:27: The backgrounds of the stages are active, with Pokémon and trainers moving around and interacting, such as Volcarona following a cyclist
Edit @ 12:40: There are various modes in the game: Single Play, National Battle and In-Store Battle. There's also a Tutorial to play through
Edit @ 13:12: There are location tests going on in Japan on January 30th, 31st and February 1st. It costs 100Ą to play. Namco Umeda Store and Maco Razona Kawasaki will have online play available
Edit @ 13:15: 200 Bandai/Namco Passport cards will be given to players each day once they fill out the gameplay survey. Lucario on the 30th, Gardevoir on the 31st, Pikachu on February 1st. Machamp card will also be given at the Japan Amusement Expo on February 14th to the 500 players who fill out the survey
Edit @ 13:29: The buttons are as follows: L activates Support, R Guards, A uses Pokémon attacks, B jumps, X is a weak attack and Y is a strong attack. Using the D-Pad and the buttons gives you various different moves. Fill a gauge to unleash Resonance Gauge for extra damage and Burst Attacks (and Mega Evolution)
Edit @ 14:53: Updated our Pokkén Tournament section with preliminary Playable Pokémon, Support Pokémon & Stages page

Battling for the first of the battle competitions for Pokémon Omega Ruby & Alpha Sapphire has begun. This competition, the Battle of Hoenn Competition, is a Single Battle competition. You can use any Pokémon in the Hoenn Pokédex except for Kyogre, Groudon, Rayquaza, Jirachi, and Deoxys and the Pokémon have to be caught or hatched in X, Y, Omega Ruby or Alpha Sapphire. The competition runs from January 23rd to January 25th. You can participate in 10 battles per day for this competition and if you have participated in 3 or more then you will receive a Sturdy Tyrunt