This update may be amended throughout the day so be sure to check back. If you have any ideas for the site, be sure to send them in
With the generation continuing, the Chatroom has been rife with discussion while the WiFi Chatroom has been a place for battles, trades and Friend Safari hunting, so be sure to visit them. Our Forums have also had these discussion and are a bustling trade and competitive section for the games. Be sure to like our FaceBook Page.
Last Update: 22:49 GMT 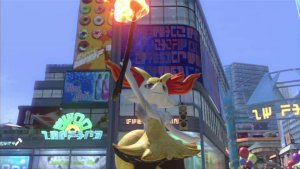 Since November, we have known that Pokkén Tournament is to support the special Shadow Mewtwo amiibo card to unlock Shadow Mewtwo immediately. However, until now we were unaware on if any other amiibo worked in the game. The official North American Nintendo site has added details on amiibo compatibility for this game and lists that all amiibo that currently exist will be able to be used in the game in order to unlock in-game items. It is not currently known what items they unlock or if the items that are unlocked are unique to any other specific amiibo. We'll bring more as it comes