This update may be amended throughout the day so be sure to check back. If you have any ideas for the site, be sure to send them in
With the generation continuing and Nationals coming up globally, and the Chatroom has been rife with discussion while the WiFi Chatroom has been a place for battles, trades and Friend Safari hunting, so be sure to visit them. Our Forums have also had these discussion and are a bustling trade and competitive section for the games. Be sure to like our FaceBook Page.
Last Update: 07:00 GMT 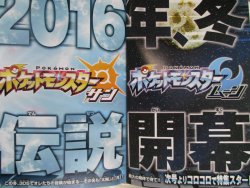 The next image from CoroCoro has leaked showcasing the limit of what is in CoroCoro for Sun & Moon. In this small bit of information, it promises that from next month, special features on Sun & Moon will begin in the magazine. This will begin next issue, which is released on April 15th 2016. We'll bring more as it comes
Edit @ 08:29: It's also stated that there's to be something called Pokémon Elections regarding the Pokémon movies. There will be a special countdown on the official site and further details will come in next month's issue, with them promising it'll be huge. The full context of this is not yet known but we'll post as and when it comes.