This update may be amended throughout the day so be sure to check back. If you have any ideas for the site, be sure to send them in
With the generation continuing and Nationals coming up globally, and the Chatroom has been rife with discussion while the WiFi Chatroom has been a place for battles, trades and Friend Safari hunting, so be sure to visit them. Our Forums have also had these discussion and are a bustling trade and competitive section for the games. Be sure to like our FaceBook Page.
Last Update: 12:06 BST
Edit @ 12:06: Pokťmon of the Week 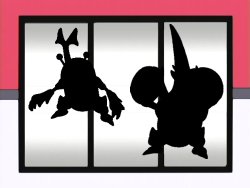 Today marks the one-hundred & thirty-fourth entry into the Generation VI competitive field with a Johto Pokťmon. These entries are created by the visitors for the visitors and then compiled by our writers Miror, Archangel, Ragnarok, Psynergy, EKZ1505 & KillerDraco. To get involved, Click here for the discussion forum
Today, we are covering a Pokťmon introduced in the second generation. This powerful Pokťmon thrusts its prized horn under its enemies' bellies, then lifts and throws them. With its Herculean powers, it can easily throw around an object that is 100 times its own weight. Heracross charges in a straight line at its foe, slips beneath the foe's grasp, and then scoops up and hurls the opponent with its mighty horn. This Pokťmon even has enough power to topple a massive tree.Heracross has sharp claws on its feet. These are planted firmly into the ground or the bark of a tree, giving the Pokťmon a secure and solid footing to forcefully fling away foes with its proud horn. So, here it is, the one-hundred & thirty-fourth entry, Heracross & Mega Heracross.