This update will be amended throughout the day so be sure to check back. If you have any ideas for the site, be sure to send them in
With the generation continuing and Nationals coming up globally, and the Chatroom has been rife with discussion while the WiFi Chatroom has been a place for battles, trades and Friend Safari hunting, so be sure to visit them. Our Forums have also had these discussion and are a bustling trade and competitive section for the games. Be sure to like our FaceBook Page.
Last Update: 19:56 GMT
Edit @ 10:36: Episode Titles | Edit @ 11:10: Episode Pictures | Edit @ 19:06: Nintendo Badge Arcade

Some new details have been released for the upcoming Smartphone title, Pokťmon GO. In the game, you raise level as a trainer and when you reach higher levels, you can find rarer and more powerful Pokťmon. Your trainer level also gains you access to more powerful items such as the Great Ball. PokťStops exist in real life as monuments where you can find various items.
To evolve Pokťmon, you have to catch the same species of Pokťmon multiple times. You can also find Pokťmon Eggs at PokťStops which hatch while you walk around in the game. When hatched, it may be a Pokťmon you have yet to see in the game.
As stated before, wild Pokťmon will vary depending on location. The example given is for Water-type Pokťmon typically being found near the oceans.
When you reach a certain point in the game, you'll be asked to join one of three teams. When joined, you can set one of your Pokťmon to various locations such as gyms around the world. Each player can only put one Pokťmon at a gym, with multiple players being able to put a Pokťmon at the gym. If a Gym is owned by another player's team, you can challenge the gym to claim control. There's also a wide variety of challenges to accomplish in the game. Pre-Release Screenshots have been added to our page
Edit @ 14:33: There appears to be a feature that will let you turn off the camera part of the game where Pokťmon would appear in real life surroundings to include a virtual backdrop. 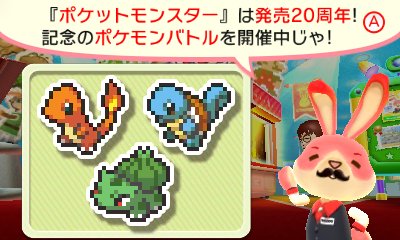 The free piece of Nintendo 3DS software, Nintendo Badge Arcade, had its weekly update in Japan. This week it has once again introduced introduced multiple panels of badges of Pokťmon to earn. These panels include various more new Pokťmon to the ones previously obtainable. We're currently cataloguing all of these badges and will update our Nintendo Badge Arcade section shortly.
Edit @ 19:56: All 10 panels and 73 badges have been added 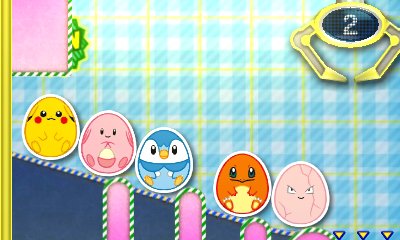 The free piece of Nintendo 3DS software, Nintendo Badge Arcade, had its weekly update in North America and with this update, it has added several new badges, specifically the special Easter badges that were released in Japan last week. Our section has a full list of badges so click the image to go to the section. 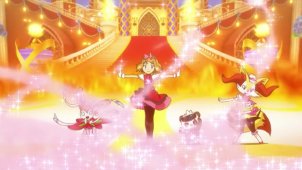 As usual, we have done pictures from the episode that aired in Japan today. This episode features the finals of Serena's Master Class Showcase. The AnimťDex has been updated with the contents of this episode. Click the picture to go to the gallery but be warned however as they contain spoilers.

The TV Tokyo website has revealed another set of new episode titles, this time for the twenty-first, twenty-second and twenty-third episodes of Pokťmon XY & Z. These episodes are set to air on April 14th, 21st and 28th respectively.
Episode 918: Serena Becomes Ash! The Ultimate Pikachu Showdown!!
Episode 919: Ash and Alan! Greninja VS Mega Charizard Once Again!!
Episode 920: The Forest's Curse and the White Phantump!!