This update may be amended throughout the day so be sure to check back. If you have any ideas for the site, be sure to send them in
With the new generation out, the Chatroom has been rife with discussion while the WiFi Chatroom has been a place for battles, trades and Friend Safari hunting, so be sure to visit them. Our Forums have also had these discussion and are a bustling trade and competitive section for the games. Be sure to like our FaceBook Page.
Last Update: 17:35 GMT 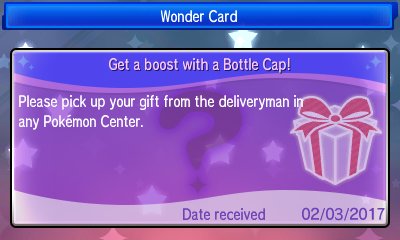 For those of you in the US, Canada, France, Italy and Spain, the Bottle Cap event has begun from today. In the US, it is being given at Gamestop until March 5th 2017. In Canada and Australia, the Bottle Cap codes can be obtained through EB Games while in Spain it will be available at GAME through the Nintendo Zone until March 12th 2017. In Italy you can get codes at Gamestop until March 5th 2017. In France it can be obtained from today to March 12th in Micromania stores. It has also begun at GamePlanet in Mexico. These codes give 1 Bottle Cap and match the event that started in the UK and various other parts of Europe earlier this month