This update may be amended throughout the day so be sure to check back. If you have any ideas for the site, be sure to send them in
Since the release of Pokťmon Ultra Sun & Ultra Moon, the Chatroom & Discord Chat has been rife with discussion while the WiFi Chatroom has been a place for battles & trades, so be sure to visit them. Our Forums have also had these discussion and are a bustling trade and competitive section for the games. Be sure to like our FaceBook Page.
Last Update: 13:38 BST
Edit @ 08:01: Pokťmon Duel | Edit @ 13:38: Episode Title 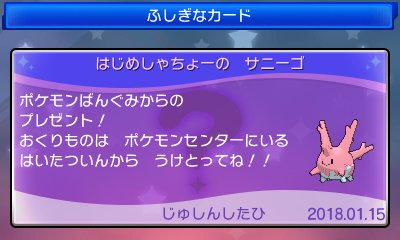 A new distribution has been announced. On January 14th 2018, the 3rd Dragon King Tournament Finals will take place in Japan and will be livestreamed on NicoNico. During the livestream, a distribution for a special Corsola will be given at the beginning of the stream. Currently we have no further details on this distribution so keep checking back

The latest Team Match has started in Pokťmon Duel and within this event, you have the ability to receive the figures for Shiny Magikarp and, the new figure, Shiny Gyarados. This event runs until December 29th 2017 so be sure to participate in it while you can

The official has revealed the next episodes titles for upcoming episodes of the Pokťmon Sun & Moon anime. This episode is set to air in Japan on January 11th 2018 following a one week break on January 4th. It features Rotom leaving the Pokťdex and becoming the many other Rotom forms
Episode 1000: Rotom Won't Stop Undergoing Forme Change!