Be sure to check Wednesday's update for huge news. This update will be amended throughout the day so be sure to check back. If you have any ideas for the site, be sure to send them in
Last Update: 21:17 BST
Edit @ 21:17: Pokémon GO Legendary Raid Hour

Niantic have announced the Legendary Raid Hour events in June. From 6pm to 7pm every Wednesday this month, there will be increased Level 5 Raids featuring Cresselia on June 5th & 12th and Kyogre on June 19th and 26th. This follows on from previous experiments testing the concept over the past few months. 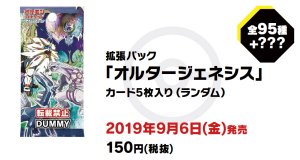 Two new upcoming sets have been announced for Japan via Japanese retailers. The first set is Alter Genesis, what will be SM12 and features 95 cards including Solgaleo, Lunala, Dialga and Palkia. It's due for release on September 9th
The second set is "High Class Pack 2019", a set of over 173 cards with each pack containing a Pokémon-GX card, and 11 cards, an increase of the normal 5 cards per pack. It also contains special shiny Energy Cards It is to be released October 4th.
We'll bring further details as they come