This update may be amended throughout the day so be sure to check back. If you have any ideas for the site, be sure to send them in
Last Update: 22:00 GMT
Edit @ 21:00: Palkia 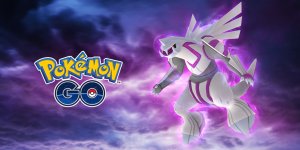 As the Hoenn event has ended, Palkia has now become the Level 5 Raid Boss and thus is now available in the game. This runs until February 28th 2019. However, with this, the other Raid Bosses are also set to change so keep checking back as we add them to our Raid Battles section
Edit @ 22:00: We're now adding the new Raid Bosses to our Pokémon GO section

A new patch is rolling out for Pokémon GO. This patch brings the game up to Version 1.101 and adds various QoL features. It now shows the stats of moves in Trainer Battles on the Pokémon's screen and has moved the button to obtain a second move up to below the Evolution button. The images for the Team Leaders when appraising the Pokémon have been updated and the game has added functionality for 12 more Spinda variants and some new moves. This update is currently rolling out across Android and will likely hit all devices including iOS in a few days