Bronzong, The Bronze Bell Pokťmon. In ages past, this Pokťmon was revered as a bringer of rain. It was found buried in the ground. Ancient people believed that petitioning Bronzong for rain was the way to make crops grow.

Bronzong is a great defensive Pokemon that has a solid defensive typing, a fantastic ability and natural bulk that allows it to check common offensive powerhouses like Salamence, Sylveon, Latias and Mamoswine. Steel/Psychic is a solid defensive typing and when combined with Levitate, it gives Bronzong plenty of opportunities to switch into Dragon types who rely on Ground coverage to pound other Steel types. Its great bulk also makes it difficult for the Pokemon it walls to break through it. However, this is were the praise ends for Bronzong as it finds it difficult to put any offensive pressure due to its mediocre offenses. This makes it easy for other offensive Pokemon like Mega Scizor and Gyarados to set up on it. Bronzong also lacks recovery and it has to rely on Leftovers to recover some of its health, making it easy to wear down. Compared to other bulky Steel types, Bronzong is outclassed by some Pokemon such as Scizor and Magearna, however, played by its own strengths as a reliable Dragon check, Bronzong can chime its way to victory.
Positives
+ Bronzong posseses a fantastic ability in Levitate, something many Steel types would kill for as it gives it an immunity to Ground attacks.
+ While it has a low base HP of 67, high 116 Defenses on both sides of the spectrum gives Bronzong great bulk to deal with the Pokemon that struggle to break through it.
+ Steel/Psychic combined with Levitate grants Bronzong resistances to Dragon, Fairy, Ice, Grass, Flying, Normal, Rock and Steel-type attacks with an immunity to Ground and Poison. This gives plenty of opportunities for Bronzong to switch into and set up.

Negatives
- A mediocre base 89 Attack with an unimpressive base 79 SpA makes it difficult for Bronzong to put pressure on most pokemon. Pokemon like Gyarados and Scizor can easily set up on it, due to its lack of offensive weight.
- Being vulnerable to Dark makes Bronzong vulnerable to Pokemon like Weavile and common users of Knock Off (which removes Bronzong's only way of recovery). Additionally, a weakness to Pursuit makes it difficult for Bronzong to be used on a match.
- A terribly low base 33 Speed means that Bronzong will usually have to take a hit before making its move. This leads it to being easily worn down if it takes a fair amount of damage.

Levitate: Damage dealing Ground-type moves have no effect on this Pokťmon. Cannot be trapped by Arena Trap ability. Takes no damage from Spikes. - Decent enough ability. Completely removes its Ground-type weakness and turns it into a second immunity. Not too shabby at all.
Heatproof: Damage from Fire-type moves and the Burn status is halved. - Also a decent choice, but probably not as much as Levitate as it just makes it so Fire-type moves essentially do neutral damage, rather than resist or immune
Heavy Metal: This Pokťmon's weight is doubled. - Yeah...no. Just no. Don't use this. Ever.

Bronzong's solid bulk & typing, combined with a fantastic ability on Levitate, makes it capable on checking Pokemon like Garchomp, Sylveon and Serperior who often will end up having to rely on weak coverage moves to even hurt it. Thanks to these attributes, Bronzong finds plenty of opportunities to set up Stealth Rock to damage foes when they switch in. Toxic allows Bronzong to wear down and cripple the Pokemon that would otherwise wall it such as Rotom-Wash. With Gyro Ball, Bronzong can take advantage of its terribly slow speed and threaten faster Pokemon such as Mega Altaria and Mega Aerodactyl. Finally, Psywave allows Bronzong to deal considerable amount of damage to Pokemon like Doublade. Keep in mind that the move will do random amounts of damage based on the user's level which doesn't makes it desirable for Bronzong to stay in and use the move consistently. On the other hand, Earthquake allows Bronzong to hurt the Steel types immune to Toxic and deal consistent damage. Psychic can be used on the last slot as well, however, taking into account Bronzong's low Special Attack, it makes it difficult to justify its use. If another teammate is able to use Stealth Rock, Bronzong can drop the move for Protect to scout for Choice users and rack up Toxic damage on foes by stalling them.

Maximum HP and Special Defense allows Bronzong to enhance efficiently its defensive capabilities allowing to take coverage moves like Hidden Power with ease. Leftovers is the item of choice to grant Bronzong a way of recovery.

A Sassy nature is the required nature to maximize the power of Bronzong's Gyro Ball along with the 0 IVs in Speed.

∑ Bronzong's great bulk and low speed makes it difficult to ignore it as a Trick Room user. However, the lack of offensive pressure forces it to lose momentum on the first turns against most opponents. ∑ A Macho Brace is another option on the item slot to further bolster Gyro Ball's power, however, this is unwanted on most scenarios as Bronzong already lacks reliable recovery. ∑ Hypnosis is an option for Bronzong to cripple one of its switch-ins and put them to sleep, however, its low accuracy combined with Bronzong's low speed makes it waste turns if it doesn't hit. ∑ Bronzong is able to set up Reflect & Light Screen thanks to its bulk, but this is an inferior option compared to other Pokemon like Azelf who can set up both Screens more consistently thanks to its higher Speed.

With the advent of Z-Moves, Bronzong has become a great contender for the setup of Trick Room. Expect for Bronzong to make a splash, as this format definitely highlights its role as a supporting team member.

Setting up Trick Room via Psychium Z has two advantages as it cannot be put under the effects of Taunt, while simultaneously boosting Bronzong's accuracy by one stage. This works in tandem with Hypnosis, which now makes a more reliable sleeping move, obtaining an 80% success rate. Protect eases prediction, which is always valuable under the Doubles format. Gyro Ball is its only source of damage, which is why it is important to have minimum speed.

-Stealth Rock could be used, though there are better setters in the tier.
-Heal Block can mess with the opponent's strategy of using recovery moves, though it does not have a lasting impact.
-Recycle + Iapapa Berry could be a source of healing, but it is not as reliable under the doubles format.

Stealth Rock damage always benefits the user as it reduces the amount of times an opponent can switch in vital members. Psychic is its primary source of damage, given the amount of Fighting-typed Pokemon that plague the LC scene. Heavy Slam deals more damage to Spritzee and other fairies, while Flash Cannon deals with Onix much more comfortably. Alternatively, Earthquake makes sure it is not a sitting gong against other Steel types, and it hits Chinchou for more damage. Recycle recovers the use of Berry Juice, which is a great plus for a passive Pokemon that lacks reliable recovery

-Calm Mind can be used, but it is not the best Pokemon to stay in for long as Knock off will threaten its longevity.
-Anyone that can take a hit from Knock Off instead of Bronzor is welcomed.
-Pokemon that can handle Fire-type moves, such as Thick Fat Munchlax, are a good pairing. 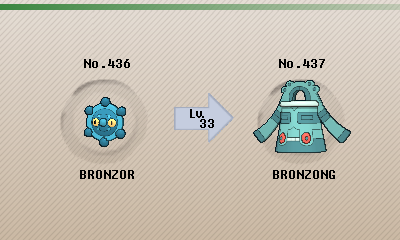