Ah Cresselia one of my alltime favorite pokemon. When it was first introduced back in 4th gen it was one of the most highly used and downright annoying walls in the game. However in recent years it has sadly seen a rapid fall from grace now finding itself rarely used and largely outclassed, but it still has its niches. Let's take a look shall we? It is bulky, with decent defenses and health which means that it can be a royal pain to take down, and combined with a support movepool that many would want, it is just always the Pokémon you have to groan at when you face it, it's just that much of a pain. It's slow, and so with its bulk, it becomes a fantastic Trick Room setter and, thanks to its bulk, it can help support Pokémon in Doubles
Positives
+ Incredibly High Defense and Special Defense. This thing can literally wall you to death in the right situation. + Diverse team support movepool. + High health with a lot of recovery options makes it an absolutely evil Pokémon.
+ Exceedingly useful in Double & Triples

Negatives
- Its Attack and Special Attack are hardly adequate. Sporting a measly base 70 and 75 respectively. - Has a fairly shallow offensive movepool to work with now days compared to some of the newer Pokémon. - It's really slow as well. Its top speed doesn't go beyond base 85 , so it's difficult for it to be any kind of offensive threat all around. - It hasn't really gained much over the generational shifts
- Not as useful in Singles as it should be.

Levitate: Damage dealing Ground-type moves have no effect on this Pokémon. Cannot be trapped by Arena Trap ability. Takes no damage from Spikes. - Great ability, giving Cresselia an immunity and removing a couple of minor threats. It's not like we have a choice though, anyway.

This is primarily the set I run on Cress now. Light Screen and Reflect halve damage from special and physical attacks respectively, and are great support for setting up your sweepers. Lunar Dance allows you to help one of your squadmates fully recover after it sets up its screens and gets the job done. Thunderwave is there so you can further cripple and annoy your opponent , but Psyshock is a good option if you'd rather have an attacking move.

Substitute is used to make Cresselia less vulnerable to those annoying status moves and take some of the pressure of your prediction skills. Calm Mind is Cresselia's setup move, and after a few boosts, Cresselia can perform a sweep if its counters are either gone or weakened. Moonblast is the always preferred attacking move because it has zero immunities as opposed to Psyshock, also hitting Dark-types. Moonlight is used for instant recovery and makes it easier for Cresselia to set up. Psyshock can be used instead of Moonlight if you have a teammate that deals with Skuntank, Drapion, and Registeel, such as Dugtrio. Psyshock also gets STAB, and so hits harder than Moonblast, while also allowing Cresselia to beat opposing CM attackers.

Psyshock is Cresselia's main STAB move, giving it the power to OHKO less bulky Fighting-types that tend to use Knock Off. Moonblast is used for coverage and hits Dark-types, which are immune to Psyshock, for super effective damage. Moonlight is instant recovery which is mandatory on a wall. Unfortunately, Moonlight only has 8 PP, which means that Cress can easily get PP stalled, so don't use Moonlight unless it's necessary. Thunder Wave is used to cripple your enemy and to make your sweeper's jobs alot easier to pull off.

Icy Wind, Psycho Shift, Toxic, Trick Room, Trick
Icy Wind can be used to do moderate damage to an opponent and bring down their Speed to your level
Psycho Shift is a handy gimmick, when we consider how Burn/Poison centric this current metagame is. Transferring status is just beautiful
Toxic is always an option. Cresselia can't easily take down a Pokémon on its own, so why not chip away at the health with status.
Trick Room is a decent option that many Cresselia use in Doubles, but in Singles it can help make Cresselia a bit more useful than it already is
Trick is always a good gimmick if you set Cresselia up for it properly. Switching items with the target can be pretty useful.

Think of Cresselia as a smaller Lugia or Giratina in terms of defenses and one might grasp how daunting it is to battle against one in Doubles/Triples. 120/120/130 defenses with a strong supportive movepool is no joke, especially when its team mates have Intimidate or Will-O-Wisp. Very few things will get close to or flat out OHKO Cresselia, meaning it WILL support its partner for a few turns before fainting... or will it even faint??

Based on the Cresselia used by the Singapore Asia Cup Qualifier's Champion, Level 51. The set uses a rather obvious but unexpected move on Cresselia, Moonlight, which when used under the sun, recovers 75% of the users HP. That's 3 Sitrus Berries in one go on a Pokemon with (technically) superior defenses to Arceus. That recovery will set opponents back a LONG way and ensure Cresselia can support its partner even further.

The first move is your Psychic STAB of choice. The second moveslot can be light speed control with Icy Wind, or just Ice Beam to hit opposing Landorus hard. Though exercise caution when using Icy Wind around Defiant/Competitive Pokemon like Bisharp and Milotic, as lowering their Speed triggers their abilities. The third moveslot is for support, disruption or a mix of both. Helping Hand give's the partner a boost in attack power. Thunder Wave is a safer method of Speed Control with full paralysis being a nice bonus. Skill Swap opens up a new can of worms by swapping Levitate to a partner, or swapping for an opposing Intimidate or even Moody from Smeargles. One can run Trick Room too if their team needs a setter.

The EVs allow Cresselia to survive a Knock Off from Max Attack Choice Band Bisharp from full health, or a Helping Hand boosted Shadow Ball from Max Special Attack Aegislash from full health. However far and few between they may be, the extra bulk helps. Rocky Helmet is an anti Mega Kangaskhan measure, but also deters contact moves in general. Leftovers is for if you've Kangaskhan covered but one can never be too certain.

For Cresselia who aren't using Moonlight, great partners deter AT LEAST Bisharp and Aegislash. Strong Earthquakes or Earth Powers from the likes of Therian Landorus or Hydreigon will do the trick. But to take full advantage of Moonlight, there will be no better partner than Mega Charizard Y or Drought Ninetails. Both of which take care of Bisharp's and Aegislash's Fire weaknesses.

Because Cresselia is so bulky and supportive, the opponent may give up on trying to KO Cresselia and focus on its partner, and if Cresselia's only means of helping out is dealing insignificant damage to the opponent, Cresselia turns from bulky support to "sitting duck" and that is never a good spot to be in.

OHKOing Cresselia off the bat is near impossible. The invaluable support it can provide and continue to provide thanks to its bulk is the reason many players opt to use it for battle. It's definitely one of the best of its kind, expect to fight many.

This is the million dollar question? How do we take down Cresselia? With its high health and high defenses, it will just survive. Even a Mega Tyranitar's Crunch after a Dragon Dance won't one hit KO it. As such, what you need to do is try and shut it down. Most Cresselia are going to be support Pokémon, so by using Taunt you'll be able to either force a switch to something more manageable, or to just force Cresselia to do its weak fighting. To actually take it down though, go for the physical hits. Physical Dark, Ghost and Bug-type hits will do the most damage. Scizor is a good option as it checks Cresselia rather will, being resistant to most of its moves and being able to handidly 2HKO it with a Technician boosted Bug Bite. Go for status moves as well to bring cresselia down as much as possible. A burn or poison is something that really hurts Cresselia. 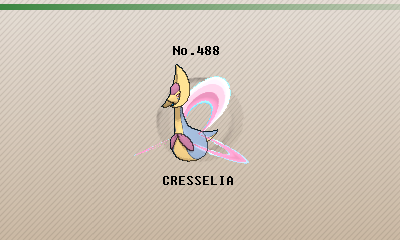