Darkrai, The Pitch-Black Pokémon. It chases people and Pokémon from its territory by causing them to experience deep, nightmarish slumbers. It can lull people to sleep and make them dream. It is active during nights of the new moon. To protect itself, it afflicts those around it with nightmares. However, it means no harm.

Darkrai is a great Pokémon. Most people associate it with its signature move, Dark Void, and nearly every Darkrai runs it. Dark Void puts the opponents (yes, opponents for Doubles & Triples) to sleep with an 80% success rate. Tied with its Speed, you can stop so many potential counters. Last generation, Dark Void was banned in all official formats due to a glitch with the sleep counter, but now that has been fixed, whenever you use Darkrai, you have to use Dark Void. Dark Void isn't the only tool at Darkrai's disposal. As a pure Dark-type, it's only weak to three types. Unfortunately, two of them are ones that have become quite common in standard play now, but Darkrai can just shrug them off with its Dark Void. That's all you have to do.
Positives
+ Its Special Attack & Speed are astonishingly good
+ Its Dark Void special move is just plain evil, and that's always fun when you're using it
+ It has a wide movepool

Negatives
- Its defensive stats and Hit Points, while good, aren't the best
- Its physical Attack stat is subpar, which is a shame as it has a variety of awesome physical moves
- It is weak to both Bug-type and Fighting-type moves, both commonly used

Bad Dreams: Reduces a sleeping foe’s HP. - Tied with its signature move, it can be utterly devastating, especially in Doubles and Triples

On a dark, cloudy night

This is a rather standard Darkrai set that you will encounter within your battles. Dark Void has its obvious uses of putting the opponent to Sleep. When doing so, this gives you at least one turn to boost up Darkrai's already phenomenal Special Attack with Nasty Plot. Dark Pulse is a powerful Dark-type move of Darkrais that will get STAB and relish the Special Attack boost, thus making it so it can take out many threats. Sludge Bomb and Thunder are both alternatives that can be used in order to gain some extra coverage, with Sludge Bomb being able to take out the Fairy-type Pokémon that plague it.

Someone is going to have a Nightmare

Now, this set is a bit complicated. Choice Specs and Choice Scarf are both used in order to give Darkrai a boost in Special Attack or Speed respectively. However, this can work to your advantage. Dark Pulse works the same as before, as does Sludge Bomb. Now, the next slot can be used for Ice Beam, or you can put Trick in. This allows for you to completely swap your hold item with your opponents, potentially messing up any strategy. If you do this, then let's move onto slot 4. Dark Void, and Thunder provide multiple alternatives. Dark Void, with a Choice Scarf, lets you jump in and make sure the opponent is asleep while Thunder gives some decent coverage. Nasty Plot should be used if you use Trick in the third slot, and allow you to boost up its Special Attack.

Dream Eater, Focus BlastHidden Power, Thunderbolt, Substitute, Taunt
Dream Eater is almost an obvious choice for Darkrai. Though it's a Psychic-type move, meaning you can't use it on Dark-type foes, it has great Base Power and accuracy, and will even heal Darkrai by half the damage dealt. Always handy.
Focus Blast does decent damage and prvoides some coverage, but it lacks accuracy.
Hidden Power, Shadow Ball, and Thunderbolt are great moves as standard for Special Attack focused Pokémon, and do a decent amount of coverage, with Thunderbolt having the chance of Paralysing.
Substitue can work on a set. By hiding behind a Substitute, it gives you more chances to put Pokémon to sleep using Dark Void
Taunt is a good move that can stop Pokémon from trying to boost themselves to survive Darkrai's hits

The VGC lobbies/forums were ON FIRE when it was known that Dark Void was legal. It's only legal user was the relatively gimmicky and pitifully weak Smeargle. Though, that didn't stop it from being used. With that in mind, Darkrai isn't (as) gimmicky nor pitifully weak. Base 125 speed and base 135 Special attack means it can also hit fast and hard. With that high of a speed, Dark Void hitting both opponents, Bad Dreams adding in respectable damage, what is stopping Darkrai from being crowned High Ruler of All that is Doubles/Triples? The answer comes later, but the moveset comes now.

Darkrai is rather frail, so investing in its defenses won't accomplish too much, but it does need to not be OHKOed by the insanely powerful attacks coming its way, so the Focus Sash is what this set will use.

Protect is a rather obvious move, but when combined with Focus Sash, Darkrai tends to stay on the field a little longer, always good! Dark Pulse is self explanatory, but in case it isn't clear already, Dark Type STAB is very strong as only 2 types resist it. Best not to forget that Dark Pulse flinches the opponent 20% of the time which compliments Darkrai's base 125 speed. Are you really going to make me tell you why you should use Dark Void on Darkrai in a Double/Triple battle? Darkrai's 3rd moveslot is up to what your team needs, I suggest a supportive move, all that I've listed have their uses, but aren't listed in order of importance. Another offensive move like Focus Blast or Spacial Rend could fit in. It's up to your team's needs.

Dark Void is the move your opponent will fear most. They WILL have answers like Taunt, Magic Bounce, Safeguard and even completely random Magic Coats. That doesn't mean Dark Void isn't a good move, you just gotta be careful when using it, especially since Dark Void has 80% base accuracy, but the odds of it hitting both opponents in doubles is 64% and 51% to hit all 3 opponents in triples. Risky enough for you? Sometimes the reward is worth the risk, but other times, there really are better moves to be using.

Snarl is the move I would experiment with for Darkrai's 3rd move because it lowers the Special Attack of both opponents in a meta where special attackers (Kyogre and Xerneas) run rampant. This can turn OHKOs into 2HKOs which I find invaluable.

Which Pokemon works well with Darkrai? The real question here is which Pokemon DOESN'T work well with Darkrai? With the threat of Dark Void, the opponent will be more tempted to aim their attacks at Darkrai, leaving its partner free to do what it wants. A set up sweeper appreciates any and all free turns it can get, so Calm Mind Mewtwo, Swords Dance Extreme Speed Arceus, or Mega Blaziken. Darkrai more or less is splashable on a lot of teams, because of that, make sure you're getting the most out of it.

SO! Why isn't Darkrai High Ruler of Doubles and Triples?

-When one uses Dark Void, one hopes to hit all targets, so in doubles that's a 64% chance to hit both, worse than Focus Blast
-The opponent will have an answer to Dark Void, having to work around that will make Darkrai less useful in battle
-Base 125 speed is fast, but not fast enough. The addition of Mega Evolutions only means more mons have access to speeds higher than base 125. Also, all Mewtwo forms outspeed and generally carry a fighting type attack.
-If running the Focus Sash, Scarf Pokemon will outspeed and get a hit on Darkrai before Dark Void off. If running a scarf, then Darkrai is limited on moves and risks getting OHKOed
-Priority moves like Extreme Speed don't care how fast Darkrai is or isn't and are relatively common, one also has to watch out for Kyogre's Water Spout.

By no means is Darkrai a terrible Pokemon, but it is fragile, and its signature move is the epitome of "Risk vs. Reward" though it can be counted on to draw attacks away from its partner, and it can hit very hard with STAB Dark Pulse. Struggling to find that 6th Pokemon for your Uber Doubles/Triples team? Give Darkrai a shot.

This is tricky. As Darkrai is fast and will almost certainly put you to sleep, you may have to rely on Pokémon with Lum Berries or Chesto Berries attached in order to survive the sleep. Same with Pokémon with Insomnia or Vital Spirit. Problem is, those Pokémon mostly can't take out Darkrai, except maybe Primeape. So, what you need to do is go in for the kill with various Fighting-type, Fairy-type or Bug-type moves. As such, Mega Heracross is the ultimate Darkrai counter. It has powerful Attack, and great moves like Pin Missile, Close Combat and Brick Break which would utterly destroy a Darkrai. You can even have it know Sleep Talk if you're planning to use it against a Darkrai. Alternatively, Fairy-type Arceus with Judgment will also hit Darkrai hard and fast, so don't be afraid to use that. 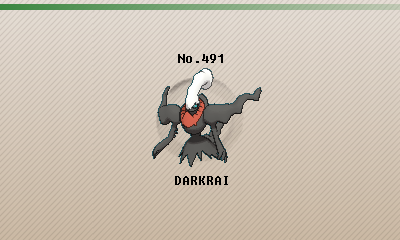