Avalugg, The Iceberg Pokémon. Its ice-covered body is as hard as steel. Its cumbersome frame crushes anything that stands in its way. The way several Bergmite huddle on its back makes it look like an aircraft carrier made of ice.

Avalugg is yet another in a long line of Gamefreak's attempts to make a defensive Ice type. Cloyster, Regice, Lapras, Cryogonal... and now Avalugg. Unlike the previously mentioned Pokemon Avalugg actually has good enough stats to just barely make it usable in standard play. It has almost obscene amounts of Defense and great HP as well as enough Attack to make its attacks sort of sting. While it will probably never be a top tier threat it is certainly a fun Pokemon to use. Avalugg's design and Pokedex data also may have been an extremely passive reference to the Allies WW2 plan to build an Aircraft Carrier made of ice (Google Project Habakkuk). The ice aircraft carrier was to have been made with a mix of water and wood pulp which would have made it virtually invincible. Perhaps this is why Avalugg has almost as much defense as Steelix?
Positives
- 95 HP and 184 Defense makes Avalugg one of the most physically bulky Pokemon in the game. Even Super Effective STAB hits bounce of his icy shell.
- It has a fairly decent support movepool. Recover, Roar, Rapid Spin and Curse are all usable.
- While it isn't a top tier threat its cool design and weird stats make it a fun Pokemon to use.

Negatives
- Being a defensive Ice type is never a good thing. Trying to use Rapid Spin when you yourself are devastated by all entry hazards is very counter productive.
- Special Defense is basically non existent.
- Defensive movepool is solid but offensive movepool is bad. Its attacking options basically consist of Avalanche, Earthquake, Stone Edge, and Gyro Ball. It doesn't even get Ice Shard.
- Avalugg makes virtually no use of its three Abilities.

Own Tempo: The Pokémon cannot be Confused while having this ability. Not really all that useful as the only things that use confusion are Klefki and Hurricane secondary effects. You probably won't be surviving many Hurricanes so I guess if you need a Klefki counter....
Ice Body: HP is restored when it’s hailing. Great ability... or at least it is when Hail is falling. Now that permanent weather doesn't exist you're better off just not bothering with this.
Hidden Ability (Available):
Sturdy: The Pokémon is unaffected by One Hit Knock Out moves and in Generation V, the Pokémon cannot be knocked out when it has full Hit Points. Probably the best ability. Nothing with a physical attack with be able to harm you much but Sturdy lets you check stuff like Alakazam in a pinch.

Avalugg has just the right stats and movepool to run a defensive set. Recover keeps Avalugg alive for long periods of time while Avalanche / Earthquake has solid offensive coverage against most things. Roar is probably the best final option as it allows you to beat things like Sub Gyarados and Kyurem. Rapid Spin can be used but keep in mind that Avalugg is actually really bad at it. It takes so much damage from Stealth Rocks and Spikes that you are probably better off using Roar and running Defog support somewhere else on the team. Avalugg's main strength is that it can simply say "no" to a wide range of sweepers and utterly block their attempts at sweeping. Avalugg is almost immune to the hits from Garchomp, Dragonite, Landorus, Gyarados and many others.

Don't want to cause an Avalugg

Before I get much further let me just say that Curse Avalugg is not going to sweep anything until every single Special Attacker on the enemy team is dead... which is easier said than done. After a single Curse Avalugg reaches almost 600 attack and defense, more than enough to shrug off virtually every hit it may face as well as 2HKOing Skarmory with Avalanche and an entire horde battle full of Delphox with Earthquake. Curse Avalugg actually does have really good physical stats but the flaw here is that it can't beat Special Attacks at all and if the opponent doesn't attack directly Avalanche doesn't even hit very hard.

Stone Edge, Gyro Ball, Mirror Coat, and Choice Band. It doesn't have a very good movepool. Stone Edge hits Talonflame hard but not really much else. While it might not always manage to be worth the moveslot Gyro Ball hits about 150 base power on everything as fast as a Salamence. It works well alongside Curse. Mirror Coat and Special Defense EVs could get a surprise kill on a Volt Switching Rotom W or something but it requires you to lose some physical bulk and it isn't even guaranteed to work. Choice Band isn't very good. Avalugg's Physical Attack is great but Avalanche hits like a wet paper bag when the opponent does not attack.

Surf, Heat Wave, and Rock Slide are extremely common and Avalugg doesn't really do much back. Keep this one in singles.

Click Special move, watch Avalugg faint.
Besides that status really cripples Avalugg. Toxic ensures its eventual demise while burn makes it much less dangerous. Stealth Rocks and Spikes put enormous pressure on the ice titan as well. Some physical moves like STAB Close Combat can 2HKO but usually require a boost to guarantee it.
But seriously. Hit Avalugg with a Special move and there will be no more Avalugg. Simple as that 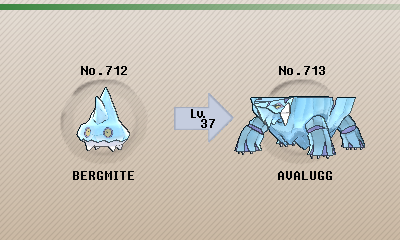