Be sure to check Wednesday's update for two brand new Pokémon. This update may be amended throughout the day so be sure to check back. If you have any ideas for the site, be sure to send them in
Since the reveal of Pokémon Ultra Sun & Ultra Moon, the Chatroom & Discord Chat has been rife with discussion while the WiFi Chatroom has been a place for battles & trades, so be sure to visit them. Our Forums have also had these discussion and are a bustling trade and competitive section for the games. Be sure to like our FaceBook Page.
Last Update: 10:36 BST 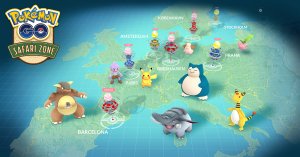 The first of the Pokémon GO Safari Zone events has begun today in Paris, Barcelona and Oberhausen. In this event, as previously reported, Kangaskhan and Chansey will appear in greater numbers, as well as there being an increased chance of shiny Pikachu and Magikarp spawns. However, it is now also confirmed that Unown is spawning the letters S, A, F, R and I in the event. Further Safari Zone events are to be held in Copenhagen & Prague on October 7th and in Stockholm and Amstelveen on October 14th.