Delibird, The Delivery Pokémon. It shares its food with people who are stranded. Because Delibird is omnivorous, sometimes it gives those people bug Pokémon. It wraps food in its tail to carry it around. The Delibird with the biggest tail is the boss of the flock!

Without question, Delibird has been one of the most Meta defining Pokémon since its release in G/S/C. Being very difficult to find, Delibird rewards players who struggle on to find it with its immense power and coverage, without the wait like Larvitar and Dratini. [Delibird has a cute design, being the Santa Pokémon. However that's all Delibird really has going for it, lacking stats to do anything, as well as terrible typing and no really good abilities. Delibird's unique move also lacks any real punch, being the coin toss of doing or healing damage making it overall a bad move.]
Positives
+Movepool - True to its amazing nature, Delibird has an amazing movepool. Delibird has the movepool to do whatever it wants wallbreak, sweep, or run Choiced sets. Delibird can even run support if you want to forgo its immense offensive ability. [Delibird has a decent movepool, having access to a lot of move tutors over the generations. Its best options however are its support, having access to Spikes, Destiny Bond, Rapid Spin, Defog, and Aurora Veil. On top of this, Delibird has Freeze-Dry which is just a great move all around, and two priority moves with Fake Out and Ice Shard]

Negatives
-Abilities - Delibird is so feared it causes wild Pokémon to attack out of manic terror, making it slower to progress through areas. [Delibird has two abilities that do the same thing, which isn't even that good, forcing the use of Hustle which doesn't really help Delibird who leans toward Special moves.] -Typing - Delibird's typing is its only drawback, Achilles Heel if you will. Its Ice/Flying typing is shared only by Articuno, one of the greatest birds in Generation 1, though Delibird is better. [With its Ice/Flying typing, Delibird will fall to any Rock move even looking at it. This really hurts it's as Stealth Rock is really common, and losing half its health isn't any good. This is compounded with weakness to Steel, Fire, and Electric.]

Hustle - Physical moves deal 50% more damage at the cost of 20% accuracy, increases wild encounter rate - Being the Pokémon world's Santa Claus, Delibird has to Hustle, carrying over to its ability. This allows Delibird to intimidate other Pokémon with its speed, causing them to shake in fear making it harder for Delibird to hit. [Hustle is a strong ability, even with the 20% accuracy drop. However Delibird doesn't have the strength to break through much, even with Hustle, but this is the best option for an offensively geared set.]
Insomnia - Prevents sleep - This prevents Delibird from falling asleep, as sleep is for the weak. [Insomnia is pretty good, allowing Delibird to sponge moves like Sleep Powder and Spore which is always solid.]
Vital Spirit - Prevents sleep, increase wild encounter rate - Similar to Insomnia but better as Delibird exerts its dominance on the wild Pokémon, increasing the chance of them attacking to prove their worth. [Literally the same thing as Insomnia but worse if you are trying to move through a game/play through]

An aggressive set, Delibird can make use of Hustle to plow through threats with Focus Punch. As such Substitute takes the first move slot with Focus Punch after it, allowing it to combo, guaranteeing the move going off as well as mitigating incoming damage. The last slots are open for three moves, Ice Punch being a strong physical Ice move to hit things with neutral or super effective damage, and Seed Bomb for Water and Rock threats for super effective damage, more than Freeze-Dry will. Lastly, Ice Shard is nice for picking off weakened targets that are faster than Delibird or just in general.

A support set, this focuses on Delibird's nice defensive tools. Spikes are the biggest one, being one of the few Spike setters in PU that can use items like Leftovers or Focus Sash. Destiny Bond is also really nice as it allows Delibird to take down something with it due to its high speed. Focus Sash works well with this as it will allow Delibird to get down a layer of Spikes then KO with Destiny Bond similar to Froslass. Rapid Spin is even more solid support, allowing Delibird to challenge other leads and spin away their hazards and force leads to fight Delibird. Lastly Freeze-Dry takes the final slot as a damage dealing move, being a solid STAB and a strong Ice move hitting Waters for super effective damage.


Rapid Spin/Defog - With Delibird's quad weakness to Rock, a Rapid Spinner is mandatory. While Delibird can use Rapid Spin or Defog, leaning on it to remove hazards is generally a bad idea. Defog also can be used but if Delibird is running Spikes, it defeats the point since Defog removes Spikes.
Golem - With Delibird's weakness to both Rock and Electric, Golem is a nice partner, being one of the best Ground types in tier (PU). Golem also brings Stealth Rock which pairs nicely with Delibird's Spikes, making most Pokémon lose 25% of their health switching in (12.5% with one layer of Spikes, 12.5% if neutral to Stealth Rock).

Delibird is very difficult to use (successfully) in high-level VGC play unfortunately. A bad defensive typing and poor stats leave Delibird horribly outclassed by many other Pokemon. It is just not powerful or reliable enough to justify taking up a valuable team slot, but if you’re feeling the Christmas spirit, Delibird can actually threaten two of the most common Pokemon in VGC 2018 in Landorus-T and Mega Salamence…if given the proper support.

Delibird will not dominate many battles, but thanks to Hustle and a damage-boosting item, it might be able to take down an opponent or two with super-effective damage. The item choice mainly comes down to if you want the ability to Protect and have its teammate set up speed control or another support move (which Delibird may badly need), or a bit more power. Max attack and speed are needed for it to have any chance to get KOs, and Adamant or Jolly nature depends on whether you want more power, or to be able to outspeed a bit more naturally.

Ice Punch and Drill Peck are Delibird’s strongest and most consistent STAB moves. Ice Shard can pick off weakened opponents, and can actually do a massive amount of damage to Landorus-T and Mega Salamence, especially if Delibird has not been Intimidated. Protect is necessary to keep Delibird safe, but Brick Break offers coverage against steel types if using a Choice Band.

-Delibird’s other two abilities can be useful to ignore Spore from Amoongus and other sleep-inducing moves, but Hustle is what gives Delibird any offensive presence at all.
-Since they cannot miss, Z moves are actually a very good way to work around the accuracy drop from Hustle. Subzero Slammer can guarantee the OHKO on Landorus-T or Mega Salamence even after Intimidate, but Supersonic Skystrike can be paired with Sky Attack for higher base power than Drill Peck would give for a strong flying-type attack. Delibird is definitely not the best option for your z move user, but if Delibird is already on your team…then why not have some fun!
-Focus Sash can be useful to ensure Delibird can survive any one hit (and follow up the next turn with a priority Ice Shard), but you do miss some power.
-Seed Bomb provides surprise coverage for Pokemon like Mega Swampert or Gastrodon. Gunk Shot can hit many of the common fairy types for super-effective damage, but Hustle drops Gunk Shot’s mediocre accuracy even more.
-Icy Wind is a good support move for speed control, but is probably not worth much consideration.
-Destiny Bond and Counter are a couple of moves that can surprise the opponent, especially on the Focus Sash set.

-Gravity is a move that has not been commonly seen since VGC 2016 on Primal Groudon teams, but it can help make up for the accuracy drop from Hustle to ensure moves can hit.
-While Delibird does not typically benefit from terrain effects due to its flying type, bringing your own terrain controller to eliminate Tapu Lele’s Psychic Terrain allows Delibird to use Ice Shard against targets on the ground. On the other hand, however, Delibird can still use Ice Shard on Landorus-T and Mega Salamence due to their Flying typing.
-Fake Out, redirection, and Wide Guard can all give Delibird safe turns to attack. Fake Out prevents a target from attacking for a turn, and redirection takes single-target attacks like Tapu Koko’s Thunderbolt away from Delibird into a Pokemon like Amoongus. Wide Guard can also be used to protect Delibird from moves it is weak to like Landorus-T’s Rock Slide or Mega Charizard Y’s Heat Wave.
-Speed control helps Delibird attack before your opponent and get off super-effective attacks.
-Helping Hand support gives Delibird a bit more power to take down opponents.
-Delibird needs all the help it can get, so Intimidate or moves like Aurora Veil (and other screens) help give it an extra turn or two of survival.

Stealth Rock- Being Ice/Flying, Delibird loses half its health switching into them. Obviously, this makes Stealth Rock the most generic answer to Delibird as any team can fit it on with ease and Delibird is easy to force out, or just KO after it switches in. This is further made a problem for Delibird as it lacks access to Roost for recovery, leaving only Leftovers and Rest.
Crustle - With either a Focus Sash or a Substitute, Crustle is a major problem for Delibird to handle due to Rock Blast, which bypasses both Focus Sash and Substitute. This on top of Crustle also being a lead/hazard setter makes it often in competition with Delibird for setting up Spikes/Stealth Rocks, while all Delibird can do is switch, set a layer of Spikes, or take Crustle with it with Destiny Bond if Crustle attacks. 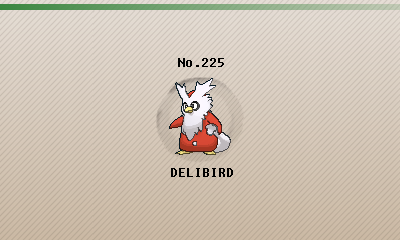