As usual, we have done pictures from the episode that aired in Japan today. This episode features the group go their separate ways and ends the Sun & Moon saga. The AniméDex has been updated with the contents of this episode page. Click the picture to go to the gallery but be warned however as they contain spoilers.

The second episode trailer has been released for the new series of Pokémon. This episode is due to air on November 17th as part of the 1 hour special and features Ash going to Vermilion City at the request of Professor Oak to attend Sakuragi Laboratory opening. When there, he meets Go and the Legendary Pokémon, Lugia
Episode 1091: On Lugia They Go, Ash and Go! 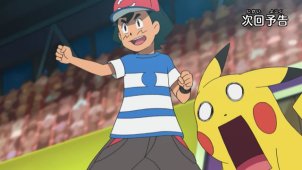 With the episode that has aired in Japan today, we have been able to update Ash's biography with a change in his Pokémon in this week's episode. We have also updated Mallow, Jessie and James' biography similarly. Be warned as it contains spoilers. 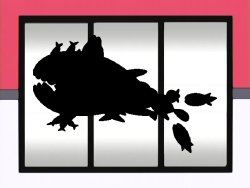 Today marks one hundred & fifty-fourth entry into the Generation VII competitive field with an Alola Pokémon. These entries are created by the visitors for the visitors and then compiled by our writers Psynergy, Jellal, & Mcdanger. To get involved, Click here for the discussion forum
Today, we are covering a Pokémon introduced in the seventh generation. When it's in trouble, its eyes moisten and begin to shine. The shining light attracts its comrades, and they stand together against their enemies. It's awfully weak and notably tasty, so everyone is always out to get it. As it happens, anyone trying to bully it receives a painful lesson. Weak Wishiwashi school together to concentrate their power. Their united force makes them the demon of the sea, feared near and far. At their appearance, even Gyarados will flee. When they team up to use Water Gun, its power exceeds that of Hydro Pump. So, here it is, the one-hundred & fifty-fourth entry, Wishiwashi