Absol, The Disaster Pokémon. Rumored to sense disasters with its horn, it became a target. It fled deep into the mountains.Its life span is over a hundred years. It senses coming disasters and appears before people only to warn them of impending danger.

Absol has always seemed to be a fan favourite. Everyone wants a pre-evo, which would be cute as hell, and evos are being suggested constantly. In the lower tiers, Absol can be an utter beast, thank to its good physical movepool and its huge base Attack. Seriously, this thing should have been a monster. Sadly, thanks to its awful bulk and subpar Speed, it is far less useful than you'd hope. Not saying it is really bad or anything, but you just sort of wish it was better. Something like Spinda, you don't want Spinda to be good. Look at it. It looks ridiculous. If you use Spinda, you want to seem ridiculous for using it. Not Absol... it has such a cool design, you just crave it to be more useful in the higher tiers. Oh well, it can still be crazy strong if it gets set up, which is harder to do nowadays thanks to everyone running priority Mach Punch, as well as Taunt and status priority due to Prankster.

Pressure: your opponent's attacks use up 2pp rather than 1pp. Generally an alright ability, but Absol won't be surviving long, and you really don't want the opponent using moves against it.
Super Luck: a much better ability for an offensive powerful like Absol. Combine this with Night Slash, Psycho Cut... even its other moves get a nice boost.
Justified: this is alright... however, you don't want to risk switching Absol into any attacks considering how frail it is. I mean... this ability isn't bad... just wasted. If you know you will be switching into a Dark attack Absol can definitely survive, it'll be worth it. But the problem is, nobody can ever be 100% sure.

Swords Dance and then sweep. Standard stuff. Sucker Punch is the strongest priority move in the game, beating even Arceus and its ExtremeSpeed. Night Slash works amazingly with Super Luck, giving it a huge chance to crit. Superpower gets great coverage with your Dark move and allows you to take on other Darks and the multitude of Steels in OU. Psycho Cut hits Fighting types hard and pairs really well with Super Luck. Megahorn is an alternative to hitting Darks without lowering your Attack and Defence. It also hits Grass types harder than any of your other moves. Fire Blast is a great move that helps you take out the standard physical walls. Skarmory, Forretress, Ferrothorn, they won't like your 120 base power super effective move in their faces.

Pure power right here. Sucker Punch gets priority which gets over Absol's poor Speed, whereas Night Slash can be incredibly powerful with Super Luck. Pursuit gets STAB and is the perfect revenge killing attack. Superpower is amazing with a Choice item as you will be switching a lot regardless. Psycho Cut is great with Super Luck, Stone Edge benefits from it also. Megahorn is a strong attack that murders Grass types and gives you an option for hitting Dark types other than Superpower. Fire Blast can take out the Steels, although in UU Registeel will just shrug them off with its big metal shoulders.

Pretty obvious what this does. Taunt stops entry hazards from being set up, but you obviously only use that on something you know you're faster than. Magic Coat prevents statuses and what not, which is great. Counter hits the opponent hard and ideally you survive with your Focus Sash, and then hit their next switch in with Sucker Punch. Or, if you predict that they'll be predicting that, you could drop Taunt on them and stop them setting up.

Baton out of hell

Again, it's obvious what to do here. Pick your stat up move and Baton Pass it. Swords Dance is the best option considering you can use the boost yourself. Hone Claws... is a worse Swords Dance. Curse is alright, but I'd still rather use Swords Dance. Calm Mind is useless for Absol, but you could still use it to Baton Pass the boost to something else. Taunt stops you from being phazed or being hit with a Taunt yourself. Substitute blocks status and damage, potentially allowing you to pass the sub or get another boost in. Baton Pass passes your stat boosts. Sucker Punch gets priority which is great and all. Night Slash is better if you're running Salac Berry for Substitute, as you'll have a Speed boost making Sucker Punch pointless.

A huge gimmick. Mean Look traps the opponent, and Perish Song kills them. The other moves are there to protect Absol whilst Perish Song ticks down. Protect stalls for a turn. Substitute stalls for at least a turn, but costs you some HP. Thunder Wave slows the opponent down and can sometimes make them miss their turn due to paralysis. Taunt stops you being phazed, if you're trying to Perish trap Skarmory and what not.

The Dance-aster Pokémon
Is there any point in anything but 252 Attack and 252 Speed? I think NOT. Adamant or Jolly is the only choice you need to make, outside of picking moves.

Absol and the amazing technicolour Magic Coat
You want your final Sucker Punch to hit as hard as possible, and you want to be fast enough for Taunt to be effective. You could run more HP and drop Speed because you are using mostly priority, but running HP and Focus Sash is a little backwards to me. Then again, it makes Counter hit harder.

Baton out of hell
You could run Attack if you wanted, but I like to be able to survive as much as possible so I can get as many boosts as possible before fleeing.

Special, Status, Knock Off, Psych Up, Punishment, Rock Slide, Wish
A special set can be used I guess, with Calm Mind, Dark Pulse, Flamethrower, the standard stuff.
Absol has access to Thunder Wave, Will-O-Wisp and Toxic, all of which are great status moves.
Knock Off can ruin an opponent's strategy completely.
Psych Up is alright... but Absol isn't really bulky enough to use it, in my opinion. It'd rather just use Swords Dance.
Punishment is another cool Dark attack, but has limited use as it is only really strong on a Pokémon with a load of stat ups.
Rock Slide can flinch which is nice, but it's pretty weak.
Wish doesn't really suit the disaster Pokémon, but it can use it.

Absol being crazy frail isn't ideal for doubles or triples, an environment known for being very fast paced. Sucker Punch is always great, and it does get Rock Slide... honestly, Absol is too frail to use in multi Pokémon battles. It could drop a Thunder Wave or a Taunt, even a Counter against Earthquakes, but it's pretty much outclassed.

You do not want Absol against any Fighting Pokémon. Have Pokémon that can take them out before you try and use Absol. Gyarados, Altaria, Weezing, Ghosts, just run something. Steels also like switching into Absol, so Magneton, Magnezone, Heatran, all the good Steel destroyers. Again, you want Absol to be able to sweep and weaken the opponent as much as possible, so if you keep its counters in check, go all out. Speaking of counters...

Fighting Pokémon eat Absol alive. This is a cold hard fact. Machamp, Conkeldurr, Breloom, Hitmonchan, Primeape, Hitmonlee, Scrafty, Lucario, Hariyama, Hitmontop, the list is practically endless. Well, not this list. This list ended there. But it could have gone on! Seriously, regardless of tier, there are always Fighting Pokémon to stop Absol. A swift Mach Punch and its gone. Moving on from Fighting Pokémon, you have Steels. Ferrothorn, Registeel, Bisharp, Skarmory, just avoid Superpower and Fire Blast and you're all set. Standard walls like Weezing are great, especially if it hits with Will-O-Wisp, which completely ruins Absol. Tangrowth is cool too, just hide from Fire Blast and Megahorn. Revenge killing Absol is an option, as long as you avoid Sucker Punch. Dugtrio and Scyther work very well. If you can predict what Absol is going to do, it's much, much less scary. However, 130 Attack doubled with a STAB priority move as well as a high critical hit move, combined with great coverage and strong moves in general, you have a very powerful glass cannon that can quickly dissect your team with its weird face blade. Be careful and play smart. 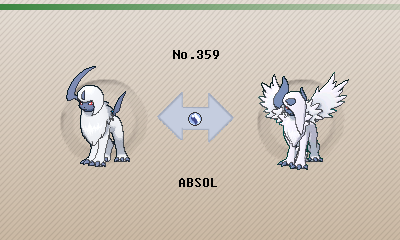