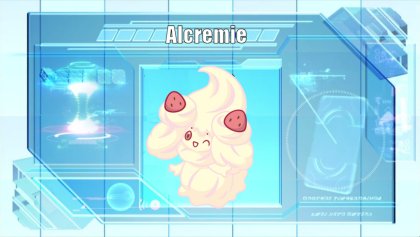 Alremie, the Cream Pokémon. When it trusts a Trainer, it will treat them to berries it's decorated with cream. When Alcremie is content, the cream it secretes from its hands becomes sweeter and richer. The moment it evolved, it took on a complex flavor. This is because of the way its cells spontaneously shifted during evolution. The cells that compose its cream fluctuated suddenly during evolution, giving the cream a complex flavor. Cream pours endlessly from this Pokémon's body. The cream stiffens when compressed by an impact. A harder impact results in harder cream. It launches swarms of missiles, each made of cream and loaded with 100,000 kilocalories. Get hit by one of these, and your head will swim.

While making Pokémon based off foodstuffs is nothing new, Alcremie is one of the sweetest results yet, at least in concept. Two fantastic supportive abilities in Sweet Veil and Aroma Veil along with an insane support move in Decorate giving a massive boost to Attack and Special Attack to Alcremie’s partner gives it a lot of interesting application in doubles format.

Yes, Alcremie is clearly designed as a doubles Pokémon, but falls significantly short in Singles. While Mono Fairy typing with a massive Base 121 Special Defense gives Alcremie appreciable Special bulk and many opportunities to pivot, its lackluster base 65 HP and 75 Defense leave it wanting in overall defenses. Which is not good as Alcremie is reliant on those defenses with its poor Base 64 Speed often forcing it to take a hit before acting. Good Special Attack coupled with a great STAB and good Special coverage give Alcremie some teeth but with its defensive issues it often can’t fit all the coverage moves it wants onto the same set. Alcremie does certainly have some sweet surprises, but this cream art is best viewed from afar.
Positives
Pure Fairy typing is fantastic, giving Alcremie both a great offensive STAB and Defensive typing.
Base 121 Special Defense enables Alcremie to pivot in reliably and moves like Recover, Acid Armor and Calm Mind help Alcremie stick around.
Base 110 Special Attack and Fantastic offensive options in Fairy STAB alongside Mystical Fire, Psyshock help Alcremie hit most targets.
Negatives
Poor Base 64 Speed leaves Alcremie often taking a hit before it can act.
Base 65 HP and 75 Defense prevent Alcremie from being as bulky as it would like to be, leaving it prone to be overwhelmed.
Alcremie can struggle to fit all the moves it wants in a single set, leaving exploitable gaps in its coverage.
Utter Nightmare to get every shiny

DYNAMAX:
Alcremie can be potent while Gigantamaxing but should not be your first choice for such a role. It loves the HP boost, as it desperately needs the extra Bulk. G-Max Finale heals Alcremie for a sixth of its HP while boasting impressive power, enabling Alcremie to keep on the offense while not having to lose momentum to recover. However, that is where the major benefits end. While it can setup beneficial terrains with Max Mindstorm or Max Overgrowth as well as the Sun with Max Flare, Alcremie can’t really abuse the terrains and weather that effectively and would have to rely on teammates to pick up the slack. .

EVs and Items:
Max HP and Defense to shore up Alcremie’s bulk as much as possible. Its Special Attack and Defense are already excellent and will be further bolstered by Calm Mind, so investment that ensures Alcremie lives long enough to pull it off is ideal. Leftovers due to the fact that Calm Mind Alcremie expects to stick around for several turns and gets more out of Leftovers than Heavy Duty Boots. If going for a more offensive route, you can use a standard sweeper array (Max Special Attack and Speed) and Timid Nature alongside Life Orb to make Alcremie as offensive as possible.

Partners:
As with any Fairy type, Ground typed partners are ideal for dealing with Fairy’s weaknesses. Mudsdale, Steelix and Rhyperior stand out, having fantastic Physical Attack and Defense that compliment Alcremie’s Special Attack and Defense while Alcremie can use the Fighting moves they draw as setup opportunities. And this is on top of being able to setup Stealth Rock to enable a sweep later. Water types like Blastoise, and Milotic solidly answer Fire types that wall Alcremie while being able to pivot into most Steel types and cripple many Physical Attackers with Scald, further improving Alcremie’s bulk.

Other Options:
Psyshock/Psychic -Alcremie’s best option for Poison types and hits most Fire types neutrally as well. However, Steel types are far more ubiquitous and wall any Alcremie not carrying Mystic Fire.
Energy Ball -Offers decent super effective coverage, but is walled by the same types as Fairy
Draining Kiss/Giga Drain -enables Alcremie to heal while attacking, though the power leaves a bit to be desired.
Acid Armor/Stored Power -Alcremie can go for a Double Dance set with Calm Mind + Acid Armor to make it very difficult to KO, with Stored Power as an excellent payoff to the setup, but suffers from lack of coverage options making it easy to wall by certain types.
Aromatherapy -Status Recovery moves are rare and can bring what would be a crippled teammate back to the fight.

Alcremie has many interesting attributes that make it a unique presence in doubles. Sweet Veil blocking Spore and Hypnosis while Aroma Veil blocks Taunt and Encore give valuable protection with no setup that can be hard to find otherwise. Decorate is a ludicrous move giving a Swords Dance and Nasty Plot boost to Alcremie’s partner which persists unlike Helping Hand and stacks, enabling them to snowball out of control quickly, especially on Pokémon otherwise unable to boost. However, Alcremie’s flaws prevent it from true greatness. Its lacking physical bulk is even more apparent in aggressive doubles matches and poor speed outright necessitates Speed control to make meaningful contributions.

Alcremie’s attributes shine more and more the stronger the format. Using Decorate on a Dragapult or Urshifu? Scary. Using Decorate on Eternatus or Palkia? Utterly Terrifying. Alcremie’s able to take versatile durable threats and give them extra power that can cut through opposition that could otherwise wall them. Protect is as always, a fantastic move in Doubles. Alcremie’s support capabilities are well known and will often draw attacks to force it out before it can enable too much damage, on top of the normal enabling scouting, stalling out beneficial conditions for the opposing team etc. Imprison is terrifying, preventing your opponent from using the same stalling tactics on you by locking out their Protect. Dazzling Gleam rounds out the set, preventing Alcremie from being completely passive and giving it some spread damage to pick up KOs if need be.

Other Options & Team Ideas:
Helping Hand, niche option to use with Imprison, and a bit redundant with Decorate, but it has priority and stacks with Decorate for truly massive blows. Tailwind and Trick Room setters are excellent Speed Control options that help Alcremie get its support off before being whacked. Palkia and Calyrex Ice Rider are excellent setters that also make for wonderful recipients for a Decorate boost considering their massive power and normal lack of boosting moves. Disruption like Rage Powder users in Amoongus and Volcarona, Fake Out, etc are also appreciated in keeping Alcremie alive and Decorating.

Strong and Bulky Poison and Steel types are Alcremie’s bane, able to eat a STAB, or even a super effective coverage move, outspeed and OHKO back with their STAB of choice. Nidoking, Metagross, and Celesteela all solidify themselves as counters to most Alcremie sets.

As Alcremie often struggles to fit all of its coverage alongside boosting and Recover, it usually has exploitable gaps that can be exposed. Alcremie lacking Psyshock struggle against many more Poison types like Nihilego, Tentacruel, and Toxtricity alongside dedicated sponges like Chansey and Blissey.

Alcremie lacking Mystical Fire on the other hand, find themselves helpless against many Steel types including Scizor, Copperajah, and Escalvier.

While it can be difficult to stop Alcremie from setting up thanks to Aroma Veil, its poor Speed and low Defense make it susceptible to being rushed down by many faster Pokémon with strong physical attacks, though this can be foiled with Acid Armor. 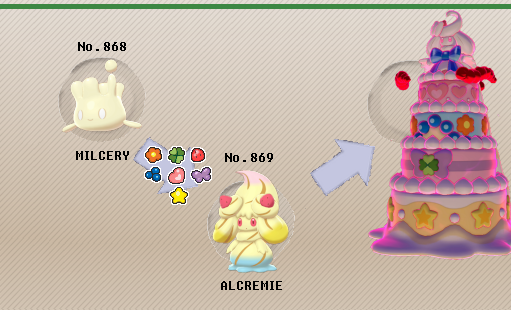