Arcanine, The Legendary Pokémon. Its proud and regal appearance has captured the hearts of people since long ago.The sight of it running over 6,200 miles in a single day and night has captivated many people. Its magnificent bark conveys a sense of majesty. Anyone hearing it can't help but grovel before it. This legendary Chinese Pokémon is considered magnificent. Many people are enchanted by its grand mane.

Arcanine is one of the classic Pokémon and beloved by many. While it is known as the Legendary Pokémon, it doesn't quite live up to its name. That's not to say that Arcanine is a bad Pokémon. Its stats are really good with its weakest stats being both defences at a reasonable 80. It has decent Attack and fairly decent Special Attack too, meaning you can run it in any way you wish, and while its Speed is lower than other Pokémon it may face. While it is weak to Stealth Rock, it can run many different sets and is a very versatile Pokémon.
Positives
+It has decent attack stats, both Attack and Special Attack.
+It is rather versatile. It can be an attacker, a wall or anything you want
+It has a fantastic physical movepool and decent abilities to match
+Its three abilities can all be used brilliantly on Arcanine
+It's just generally awesome.

Negatives
-Its defences are rather mediocre
-It hasn't changed much from Generation V
-Its Special movepool is rather inadequate
-Base 95 Speed is good, but could have been better. A boost like other Pokémon got in X & Y would have been lovely for Arcanine, but alas.

Intimidate: Upon entering battle, the opponent’s Attack lowers one stage. - This is a decent ability and can screw over multiple different Pokémon and helps Arcanine be a fantastic physical wall.
Flash Fire:Gives an immunity to Fire moves, and when hit by one boosts the power of Arcanine's Fire type moves by 50%. Let's face it, nobody is going to use a Fire-type move against Arcanine, but in singles, this ability does have some use in allowing you to switch in to a Fire-type move and get a power boost.
Hidden Ability (Available):
Justified: Attack is raised by one stage when the Pokémon is hit by a Dark-type move - A decent enough ability. While it doesn't give Arcanine immunity to the Dark-type moves, it does give it an overall boost, rather than a boost just to a single type

Chances are that if you want to use Arcanine, you're going to want to attack and this set is a perfect set to abuse this. Flare Blitz is Arcanine's most powerful move, and will OHKO practically any Pokémon that is weak to it, and 2HKO neutral ones. This makes it an incredibly dangerous move, but of course has a bit of recoil which can mess with Arcanine a little and make it easier to defeat. Wild Charge and Crunch give some powerful damage of Electric-type and Dark-type respectively, giving decent coverage. Close Combat is very powerful, but will lower Arcanine's defences, making it easier to be knocked out, but it deals with many types like Rock, Steel and Dark. Morning Sun, however, is a decent alternative and can give Arcanine some form of recovery. Obviously, you can't use this if you run the Choice Band item. Finally, Extreme Speed has a +2 Speed Priority so can outdo some common moves such as Sucker Punch, Quick Attack and Water Shuriken

The Eye of the Tiger

Now, another way to use Arcanine is to have it as a physical wall. Flare Blitz runs the same as usual but Will-O-Wisp, teamed with Intimidate, can completely decimate a physical opponent, allowing for its Attack stat to be reduced ridiculously. You can ruin many strategies with this. Extreme Speed gives decent priority and Morning Sun will heal Arcanine. The EV spread may seem odd, but with it being 248 for HP, you will receive less Stealth Rock damage and the Speed will allow it to outspeed Pokémon like a Jolly Scrafty. With its Defense stat, it'd be able to survive a Garchomp's Earthquake (assuming it had been reduced in power by Intimidate)
-1 252 Atk Choice Band Garchomp Earthquake vs. 248 HP / 216+ Def Arcanine: 282-332 (73.6 - 86.6%)

So, we've had a set that focuses on Arcanine's physical prowess, so what about the Special? Well, Arcanine's Special movepool is rather limited, so nobody will expect it. At standard, it's subpar, but when you put weather into it, it can do rather well. Sunny Day will set up the weather, and is vital to the set. Flamethrower and Fire Blast will both get increased power. Go with Flamethrower if you want more guaranteed hits, or Fire Blast if you want to hit hard. Solar Beam will take out those pesky Ground, Rock and Water-type Pokémon that cause Arcanine some grief, with Sunny Day making it so it doesn't need a turn to charge. Morning Sun is a decent healing move as standard, but in sunshine, it will recover up to two thirds of the maximum Hit Points of Arcanine. This moveset can stun players and have Arcanine sweep.

Agility, Dragon Pulse, Flame Charge, Heat Wave, Iron Head, Outrage, Toxic, Will-O-Wisp
Agility provides extra speed that Arcanine can certainly use to its advantage, allowing it to outspeed many, including multiple Choice Scarf Pokémon. Dragon Pulse can be used to hit alot of Pokémon neutrally and surprise Pokémon by using Arcanine's Special stat.
Flame Charge can be used for less speed boosts than Agility but provide decent damage while doing so.
Heat Wave is another alternative to Flamethrower and Fire Blast, as well as being useful in Double and Triple battles.
Iron Head is another move that provides neutral coverage, and also has a chance of making the opponent flinch.
Outrage is a powerful move that can do serious damage. However, since the inception of Fairy-type, and the fact it will Confuse Arcanine at the end, means that it is not a move that should be used too often these days.
Toxic can help chip away at the opponent
Will-O-Wisp can burn the opponent, which can further harm any physical orientated Pokémon. It's deadly when combined with Intimidate

Arcanine has an insanely useful movepool, it has coverage in all of the right spots AND has intimidate. Not too many Pokemon have gotten as lucky as Arcanine in just being granted moves as the generation turns. The Pokedex classifies it as a "Legendary Pokemon," some believe that to not be true, however it is worth noting that all of Entei's Event Moves that were considered competitively sound, Arcanine already had, and THEN some. One went as far to say that "The problem with Entei competitively is that Arcanine exists." This set is what most people can expect from an Arcanine in doubles.

Despite being a sound choice over Entei... that really isn't saying much. Fortunately there are some cool tricks up Arcanine's sleeve, the first having Justified as it's ability, if Arcanine's partner uses "Beat up" on it, it's attack will shoot through the roof and make Arcanine somewhat comparable to Extremekiller Arceus, being able to outspeed Talonflame and such. If running Choice Band chances are that you'll be switching in and out a lot, so Intimidate would be the more useful choice. Though Intimidate on a Pokemon that has base 90/80/80 defenses isn't exactly going to take repeated hits. Being weak to Rock Slide, Earthquake and Water moves without much to do back in return really hurts Arcanine's ability to come in freely and deal lots of damage.

A bit of an oddball set, but Arcanine does have nice support moves in Helping hand and Will-o-Wisp with Intimidate on the side. Extremespeed is to pick off the Pokemon who survived the Helping Hand boosted attack. Will-o-Wisp is for Garchomp, who otherwise destroys each and every Arcanine conceivable. Flare Blitz is your primary STAB.

Arcanine would love to hold an Assault Vest, Choice Band, and another item while still being able to chose its moves freely, lucky for us that means Cherim under the Sun would be a great partner for Arcanine, though very situational. Arcanine appreciates any Pokemon who can take out Garchomp, so a strong Fairy type like Gardevoir wouldn't be a bad choice either.

Arcanine still has a few things holding it back from being game breakingly powerful, first and foremost, being a pure fire type is bad defensively, especially when the defenses are already questionable even when factoring in intimidate, the second being its base 95 speed. It's a good speed, but not quite good enough as threats like Garchomp and Mega Charizard X outspeed it and often run a speed boosting nature, Extremespeed can only help being outsped so much.

All and all, Arcanine has a surprising amount of moves it can use. If you've somehow found your team needing a physically strong fire type with some defensive qualities, Arcanine might be a perfect fit for your team.

What's the best way to take out Arcanine? That's simple, just throw attacks at it. If you set up Stealth Rock, that's 25% of its health gone instantly, and with most Arcanine running Flare Blitz, it'll be taking out its health on its own as it is. If you gfo for bulky Water-type Pokémon, or Rock and Ground-type Pokémon with their wide assortment of moves, Arcanine will gone down with ease. Due to its mediocre defences, it won't be able to survive too many Earthquakes, Rock Slides or Surfs. Anything that's faster can easily chip away at it, too. 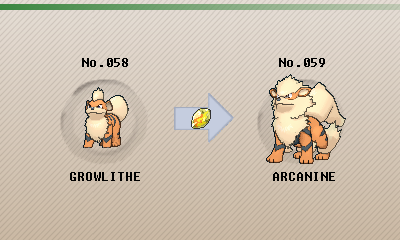