Donphan, The Armor Pokémon. It has sharp, hard tusks and a rugged hide. Its Tackle is strong enough to knock down a house. The longer and bigger its tusks, the higher its rank in its herd. The tusks take long to grow, It attacks by curling up, then rolling into its foe. It can blow apart a house in one hit.

Donphan has always felt like an awesome Pokémon to me. Ever since it just had a random appearance in the first movie, it has just screamed awesome. It is a shame, however, that it doesn't quite live up to the expectations brought by the way it appeared. That doesn't mean that it is useless, though, as it has quite a lot going for it and can sit comfortably among many other Pokémon, but really you can find better ones to do the tasks that Donphan can do. It is a purely phyiscally focused Pokémon, but you can easily find others with similar stats but better special stats to allow for it to survive better. Despite that, its physical stats are stunning and it has an amazing movepool to support it.
Positives
- It has got considerable physical stats, giving it significant bulk and attacking power. 120 in both stats is nothing to scoff at
- It's a Rapid Spin user...with enough bulk to survive. That is nothing short of awesome
- Sturdy will allow it to survive a hit and be able to destroy many an opponent before it faints.
- Physical movepool gives it decent coverage which can defeat many a Pokémon in one go
- It has access to Knock Off

Negatives
- Its Special stats suck. As it is Ground-type, it is weak to Ice, Grass and Water-types which all are predominantly special based. Even Delphox can do sizeable damage to it.
- It lacks Speed which is a bit of a shame since it can hit hard

Sturdy: The Pokémon is unaffected by One Hit Knock Out moves and in Generation V, the Pokémon cannot be knocked out when it has full Hit Points. This ability is necessary if you want to properly use a Donphan and not have it as cannon fodder
Hidden Ability (Available):
Sand Veil: Raises the Pokémon’s evasion during a sandstorm by one level. It's a decent enough ability, but requires setting up with a sandstorm and is far less reliable than Sturdy. Don't use it.

I Want My Elephant

This is the typical Donphan set that is used. It has a decent range of moves in order to do damage and can also be used to set up and remove hazards. Earthquake gets STAB and capitalises upon Donphan's high Attack stat. This means that it can give serious damage to a variety of Pokémon, being able to OHKO many, and even 2HKO phyiscally gifted Pokémon like Tyranitar and Terrakion. Ice Shard gives priority, which is awesome on a Pokémon with speed like Donphan. It helps Donphan be used to stop many Dragon-types like Salamence, Garchomp and even Pokémon that stop spnners like Landorus. Knock Off, thanks to the Gen VI buff, is also a very viable move which can do serious damage to a Pokémon with a hold item, which let's face it, is practically every non-Mega Evolved Pokémon in the competitive environment, but if you don't want to go that route, then you can screw the opponent over by setting up Stealth Rock. Rapid Spin speaks for itself, it can get rid of entry hazards and that's what Donphan is good at. It's bulky enough to survive a hit and remove the entry hazards. .

Try taking my tusks...I dare you..

Roar, Stone Edge, Head Smash, Play Rough, Seed Bomb
Roar is a decent enough move to use in reserves, and can allow for you to get rid of the opponent's Pokémon, hopefully for one you can more easily destroy
Stone Edge is an incredibly powerful Rock-type move which can decimate many opponents and remove Ice-type opponents, but it lacks accuracy
You can use Head Smash with the Choice Band. This would allow for Donphan to be able to OHKO many Pokémon, but the recoil it receives will mean it won't survive for long
Play Rough gives some decent coverage against Dragon-types and Dark-types, but realistically, Ice Shard is better against the Dragon-types.
Seed Bomb can be used for coverage against the inevitable Water-types, but why would you keep Donphan out against them?

If you have the ability to protect the Donphan, then it can do wonders in Doubles & Triples. Its Earthquake can do serious damage to all the opponents.

Go Special. Water-types like Starmie, Greninja, Politoed and Gastrodon can all do ridiculous amounts of damage on Donphan, so that would force the opponent to switch out. In addition to that, Kyurem can be a good counter as both of its alternate forms have an ability that causes Sturdy to no longer function. If you're running hazards against the team with Donphan in, then having a Ghost-type will cause its Rapid Spin to fail, and the hazards will remain. Essentially, just keep hitting its special weakspot, and it will crumble.

Black/White:
Trade from Black 2 or White 2 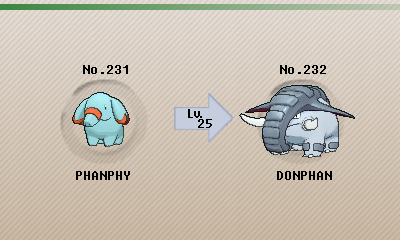