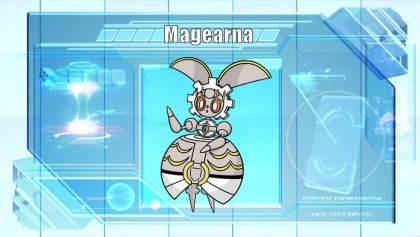 Magearna, the Artificial Pokémon. This artificial Pokémon, constructed more than 500 years ago, can understand human speech but cannot itself speak. Its mechanized body is merely a vessel. Its true self is its Soul-Heart, an artificial soul. It synchronizes its consciousness with others to understand their feelings. This faculty makes it useful for taking care of people.

Magearna returns triumphantly in Generation 8. While gone are the Z-Crystals that Magearna could abuse for an easy Soul Heart boost, Dynamax is an acceptable substitute, enabling Magearna to tank a significant portion of the competition as its sets up and grinds them down. Having the phenomenal Steel Fairy typing and great defenses gives Magearna numerous pivot opportunities, including perennial threats like Xerneas and Yveltal and a dridiculously potent STAB. And its moveset. Magearna’s movepool is wide and varied, gaining access to Trick in the generational shift, on top of being able to run Trick Room or Shift Gear for speed control, the rare Heal Bell for Clerical support, and Volt Switch/Baton Pass for pivoting. And that’s not even getting into Magearna’s varied offensive coverage which compliment Soul Heart enabling even defensive sets to snowball once Magearna starts picking up KOs.

However, Magearna’s competition is just as, if not even more fierce this time around. Zacian Crowned Sword is one of the best Pokémon period and sharing the same fantastic typing does strain team building a bit alongside other excellent Steel types like Dusk Mane Necrozma and Ferrothorn. Its slow speed and lack of reliable recovery outside of Pain Split give Magearna longevity issues, making it vulnerable to being revenge KO’d or forced out before it can get going. Magearna is still all around an excellent Pokémon and is certainly worth consideration when building a team.
Positives
Steel Fairy typing gives Magearna a wide array of resistances and immunities alongside two great STABs.
Magearna’s support movepool is vast, enabling it to act as a Cleric, Pivot, and/or Setup Sweeper
Base 130 Special Attack, Soul Heart, and numerous coverage options to compliment its STABs enables almost every Magearna to be a potential sweeper in the late game.

Negatives
Base 65 Speed is awkwardly slow, both in and out of Trick Room, often forcing Magearna to take a hit before doing anything.
Only having the unreliable Pain Split and weak Draining Kiss for recovery hinders Magearna’s ability to take repeated hits and entry hazards.
Fierce competition with other Steel types who share similar weaknesses

Support Magearna set, elegantly compressing Clerical duties with a reliable slow pivot into one teammate. Heal Bell is the crux of the set, invalidating status attempts to shutdown Magearna's teammates like burns on Physical Sweepers, Toxic on tanks and Paralysis in general. Volt Switch compliments Magearna's low speed and fantastic typing, enabling it to come in and then safely Volt Switch out to get a teammate in for free against a prospective counter. Pain Split is Magearna's best recovery option, enabling it to come in on repeated hits and recover back up, enabling it to perform its duties longer. Fleur Cannon rounds out the set, giving Magearna a potent weapon and preventing it from being completely passive, covering many powerful Dragon and Dark types while potentially punishing Ground types who think they can come in on a Volt Switching Magearna for free. .

DYNAMAX:
Not recommended. This set is concerned with support and this its coverage is poor for a Dynamax candidate despite Magearna's ability normally lending itself to Dynamax. If you need to go on the offensive, Max Starfall does great in avoiding Fleur Cannon's downside while providing Status Protection to Magearna's teammates.

EVs and Items:
Max HP and Defense to give Magearna as much physical bulk as possible to endure potential Earthquakes, Close Combats, etc. Special Defense can be considered if more concerned about Magearna pivoting into special attacks, but resistances often lend it to tank Physical Attacks. Leftovers gives Magearna added longevity and helps offset entry hazards, though Shuca Berry or Occa Berry can be considered for a one time survival against Ground and Fire attacks respectively.

Partners:
Lugia and Giratina make for great partners with Support Magearna, often being the targets of Toxic thanks to their great bulk while being able to completely void Ground attacks while the latter also tanking Fire moves comfortably, making them great pivot targets with Volt Switch. Kyogre works well with any Steel type, its ability to reduce Fire damage via Drizzle is invaluable all the while checking Magearna's Ground and Fire weaknesses in general. Other Drizzle setters can suffice if Kyogre isn't available.

Other Options:
Baton Pass -a more reliable move than Volt Switch, it can't be stopped by Ground types and can potentially pass on Soul Heart boosts. However, has negative synergy with Fleur Cannon, so you would have to run Dazzling Gleam, and the power drop off is significant.
Trick + Choice Item- Can completely shutdown a wall that is likely spreading Status everywhere, but Magearna would be forced to switch normally if it doesn't open with Volt Switch

Trick Room Magearna makes a splash in doubles, relying on its STABs and teammates to adapt to the situation. Dazzling Gleam has fantastic coverage and is a spread move, ideal for picking off weakened targets to net several boosts as well as cover bases against a Protect. Flash Cannon is preferred over Steel Beam as the single target STAB since it doesn’t compromise Magearna’s durability. Trick Room is a fantastic speed control option in Magearna’s wheelhouse, and thanks to Magearna’s middling Speed, it can not only counter teams predicated around Tailwind abuse, but Trick Room abuse as well, even with min investment outspeeding Trick Room staples like Porygon2 out of Trick Room. Protect rounds out the set, as its laurels in Doubles have been sung time and time again. Enables scouting, stalls out your opponent’s beneficial conditions, etc. .

EVs and Items:
Icy Wind -gives Magearna excellent Speed Control that can’t be negated by Ground types and Lightning Rod users.
Follow Me/Rage Powder users pair wonderfully with Magearna, able to simultaneously protect it and feed it a boost if the drawn attack KOs them. Indeedee stands out with Psychic Terrain blocking Fake Out, and Helping Hand/Expanding Force enabling Magearna to reach KOs

Fire types are a consistent problem for Magearna, resisting both of its STABs and often threatening OHKOs with their own STABs. Ho-oh and Specially defensive Heatran stand out thanks to their great bulk tanking even Super Effective coverage while being able to threaten a one to two hit KO back.

Sponges like Blissey, and Eternatus can repeated tank Magearna’s attacks, heal them off and wear it down in a war of attration.

Wallbreakers like Specs Kyogre and Specs Calyrex Shadow Rider can outright OHKO even bulky Magearna, but they struggle to take Fleur Cannon and Steel Beam in turn. 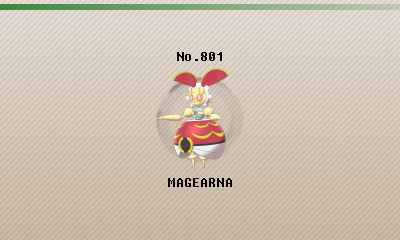