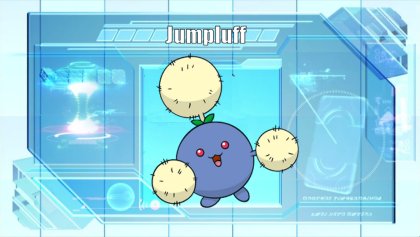 Jumpluff, The Cottonweed Pokťmon. Blown by seasonal winds, it circles the globe, scattering cotton spores as it goes. Even in the fiercest wind, it can control its fluff to make its way to any place in the world it wants. Jumpluff rides warm southern winds to cross the sea and fly to foreign lands. The Pokťmon descends to the ground when it encounters cold air while it is floating.

Jumpluff has always been a rather odd Pokťmon. It was the first with the Grass/Flying-type combination and has got a fantastic concept behind it. Unfortunately, that's about it as far as how cool Jumpluff is. It suffers from some of the main issues that comes with being a Johto Pokťmon; it has a weird stat distribution that is just off of being any good. It also has a weird movepool. Jumpluff could be a good Pokťmon if not for these things. That's not to say that it doesn't have its uses, but when most sets that work with it require no item, there's definitely something amiss. Nevertheless, Jumpluff can be somewhat decent when used right, especially in doubles
Positives
+ Its best stat, Speed, is at 110 making it the joint 56th fastest Pokťmon in the game, the same speed as Gengar, Raichu, Lugia and Mega Metagross
+ If using Chlorophyll, its Speed is absolutely ridiculous
+ Its defenses are moderate. 75/70/95 is definitely solid. The +10 boost in Special Defense in Generation VI really helped it out.
+ It is cute

Negatives
- Its movepool is just not vast enough to do a lot
- 4* weakness to Ice is never fun
- Its offensive stats are just poor at 55 for both.

Chlorophyll: When sunny, the Pokťmonís Speed doubles. However, Speed will not double on the turn weather becomes Strong Sunlight. - This ability works well for Jumpluff. By doubling its Speed, it should be able to outspeed literally everything in the game that isn't a Choice Scarf Speed Forme Deoxys. However, it does make it more susceptable to the Fire-type moves that can just wreck it.
Leaf Guard: Prevents the Pokťmon from receiving status conditions during strong sunlight. - This ability is a good one in concept, but with the other abilities, it just falls flat Hidden Ability (Available): Infiltrator: The protections and stat boosts caused by the moves Substitute, Reflect, Light Screen and Safeguard by the opponent are ignored. - This can always be useful. Being able to hit behind a Substitute is very nice.

Got a pretty standard Swords Dance set for Jumpluff here. Go with a Focus Sash if you're going with Chlorophyll so you can at least survive the Fire-type moves once. Sleep Powder can be useful to immobilise your opponents. Swords Dance always can give you a boost and then, with no item and Acrobatics, with STAB, Jumpluff can actually do a bit of damage. It won't be OHKOing most things, but it can definitely give a lot of damage. Seed Bomb is also used to give the Grass-type STAB.

This is more of a support set than the last one, but works similar. Rather than Swords Dance, it has U-turn to allow for Jumpluff to make a tactical retreat should it be necessary. Acrobatics works the same as before, as does Sleep Powder. For the third slot, however you have the choice of Seed Bomb for the damage, Toxic to chip away at the opponent, or the more unusual choice, Memento. Obviously, Memento is a last resort since it causes Jumpluff to faint which then has the opponent's Attack and Special Attack decimated.

- Going with a Subseed set could be an option. The Substitute/Leech Seed combo is always an annoying one for people to deal with, and Jumpluff does have a few of the defences that can be used to bring it up for a while, but due to the weaknesses of Jumpluff it's not a perfect idea
-You could always add Sunny Day to have the sun boost in your control and set it up should Jumpluff miraculously survive the turns
-Worry Seed in a Support set is fun. It may be a bit gimmicky but it has the ability to ruin so many strategies.

Raise your hand if you thought Jumpluff would win a VGC National Championship this year. If your hand is up, you're either lying, a Psychic-type Pokemon, or you won the German National Championship. That's right, this little cottonweed helped win a National Champioship in a format where Primal Groudon and Kyogre dominate! At first glance, its stats are completely unremarkable. Its movepool, combined with its ability Chlorophyll, however, allows to it shut down arguably the scariest setup Pokemon in VGC 2016, while also providing a number of other support moves. .

Jumpluff's main function is to play a support role next to Primal Groudon. With Groudon's Desolate Land in effect, Jumpluff reaches incredible speed thanks to Chlorophyll. While max speed with a Timid nature is often more than you need, it ensures that Jumpluff outspeeds everything up to other base 110s if the sun isn't up or if the opponent has used Tailwind to match Jumpluff's Chlorophyll boost. Jumpluff doesn't have great natural bulk, but max HP allows to take weak or resisted attacks as well as it can, and the Focus Sash ensures that it can survive any one attack.

Sleep Powder, while it doesn't have perfect accuracy, shuts down most opponents by putting them to sleep before they can attack. Encore is probably the main selling point of this set. While Jumpluff has just about the fastest non-Prankster Encore with the sun up, the most important feature is that it outspeeds a +2 Xerneas thanks to Chlorophyll. If the Xerneas has just used Geomancy, Jumpluff can still outspeed it and use Encore so that Xerneas can't take advantage of the offensive boost. Helping Hand boosts the damage of its teammate's attacks, especially Groudon's Eruption and Precipice Blades. For example, a Helping Hand-boosted Precipice Blades from a Primal Groudon can actually OHKO an opposing bulky Primal Groudon, which is normally not the case due to the spread damage. Rage Powder, on the other hand, can draw away single-target attacks aimed at Jumpluff's teammate. Protect is still the best move in doubles, allowing Jumpluff to absorb double targets while its partner eliminates a threat, dodge Fake Out to keep its Focus Sash intact, or to stall out turns of speed control or Gravity.

-Splash
-Mental Herb allows Jumpluff to absorb a Taunt from Prankster users like Thundurus or Whimsicott, and also Encore from Whimsicott or Liepard.
-Coba Berry was actually the item choice on Arash Ommati's National Championship-winning Jumpluff. Coba Berry allows it to survive a Life Orb Dragon Ascent from an Intimidated Mega Rayquaza, as well a Life Orb Brave Bird from Adamant Talonflame. While Focus Sash is generally the better item since it can allow Jumpluff to also live attacks like Primal Kyogre's Ice Beam, Coba Berry is a very creative and solid option if the Focus Sash is already on another Pokemon (in Arash's case, it was on his Thundurus).
-Grass Knot is probably the best option if you want an actual attack in your set as it can do respectable to damage to both Primals due to their weight.
-Worry Seed can mess with abilities, whether you shut down a Rayquaza's Air Lock to keep your Groudon safe from water moves in the harsh sunlight, get rid of an opponent's Levitate, or use it on Jumpluff's teammate to prevent sleep from an opposing Smeargle's Dark Void.
-Stun Spore isn't as accurate as other paralyzing moves like Thunder Wave or Glare, but can provide a form of speed control while also giving a 25% chance for the target to be fully paralyzed every turn. Cotton Spore also can reduce speed (by two stages), although the opponent can reset the stat drops by switching out.

Jumpluff isn't a particularly hard Pokťmon to defeat. As it has a 4x weakness to Ice and moderate defenses, it will probably fold to a standard non-STAB Ice Beam in two hits at most from most Pokťmon. COnversely, if it's a Chlorophyll Jumpluff that you're against, then going Fire-type moves is a safe bet. Jumpluff is a fast Pokťmon, so if you want to completely shut it down, Trick Room is a fantastic choice. Icy Wind could work, too, as with the 4* weakness it will do some solid damage while lowering the Speed.