Conkeldurr, The Muscular Pokťmon. It is thought that Conkeldurr taught humans how to make concrete more than 2,000 years ago.Rather than rely on force, they master moves that utilize the centrifugal force of spinning concrete. They use concrete pillars as walking canes. They know moves that enable them to swing the pillars freely in battle.

Conkeldurr is a very interesting Pokťmon, and it is suprisingly good. It has an amazing Attack stat and decent Hit Points & Defense to match, making it an incredibly bulky Pokťmon. Though, despite the physical fortitude of this Pokťmon, it is rather weak in its Special stats, but those aren't overly necessary on this Pokťmon. It's also a bit slow, but that makes it work wonders in a Trick Room team. The entire concept of Conkeldurr is clear. This is a Pokťmon that is always holding two bits of concrete, so you just know it's going to hit incredibly hard. It also doesn't have a single ability that isn't useful in any way. In some ways, Conkeldurr is one of the most brilliantly designed Pokťmon in terms of core mechanics. There's very little bad to actually say about it.
Positives
- It has an amazing Attack stat
- It is incredibly bulky
- It has three perfect abilities that suit multiple situations
- Its movepool compliments its stats wonderfully.

Negatives
- Its Special Defense means that, despite its high Hit Points, it can't really take powerful special moves
- It is rather slow
- It lacks Close Combat...madness.
- Many of the moves that help Conkeldurr with coverage, specifically elemental punches, are not legal in the Kalos-native metagame

Guts: Attack raises to 1.5 times when induced with a status (BURN, PARALYZE, SLEEP, POISON, FREEZE). Burnís effect of lowering Attack is not applied. - This ability is always one that's beloved by many. It gives a significant boost, but can chip away at your own health. It also can hinder an enemy if they steal your item
Sheer Force: Moves with a secondary effect are increased in power by 33% but lose their secondary effect - Another decent ability. You get a smaller boost than Guts, but you don't lose health. Plus, if tied with a Life Orb, you get that boost as well without having the Life Orb recoil. Problem is that Conkeldurr's movepool for this is somewhat small
Hidden Ability (Available)
Iron Fist: The power of punching moves is increased by 20%. - Another smaller boost, and more useful on transferred Conkeldurr, but tied in with Drain Punch, it will help your recovery.

Some would argue that Guts is the best ability to have on Conkeldurr and they certainly aren't wrong in their reasoning. Getting a 50% boost just because of a status condition is great, especially with the Flame Orb as it ignores Attack drop of the Burn and doesn't increase in damage like the poison from the Toxic Orb does. Drain Punch works the same as before. It does decent damage, with STAB, and will restore health on Conkeldurr, often negating hits from other Pokťmon as well as the burn. Mach Punch is great due to getting STAB with a priority move, but it is somewhat weak. Stone Edge & Poison Jab both cover various weaknesses of Conkeldurr, specifically Flying and Fairy respectively. Payback is a decent option against Psychic-type Pokťmon, but really Earthquake is your best bet as it does decent damage to any opponent. If you run this set on Conkeldurr, you're bound to defeat parts of your opponent's team with ease.

This is a standard Life Orb/Sheer Force set. As stated before, the combo is much loved because it will give you both the Life Orb boost and the Sheer Force boost without the recoil. Drain Punch is the only damaging move in this sets that doesn't activate the boosts, which is good as you don't want to lose its recovery effect anyway. The rest all do and provide decent coverage so you can pick to your own tastes depending upon your team. Of course, three of the options aren't currently available in Kalos, but in the future this set will be amazing. Bulk Up is also good if you can fit it in to fully shore up Conkeldurr's attacks to make it a massive powerhouse.

Assault Vest, Facade, Fling, Iron Fist, Knock Off
Assault Vest is a good option for Conkeldurr as it will boost Conkeldurr's Special Defense stat, but using it means you can't use a Guts set.
Facade can do decent Normal-type damage, but when tied in with Conkeldurr's Guts & Flame Orb, it can decimate the opponent.
Fling is a weird option for any Pokťmon to use, but after you have burned yourself, being able to throw the Flame Orb for decent damage, as well as burning the opponent is sometimes a hilarious thing to do
Iron Fist is a worthwhile option for your sets, but is often outclassed by the other two abilities.
Knock Off can do some decent Dark-type damage and help take out the Psychic-type Pokťmon that Conkeldurr clearly fears
Superpower is not the best move to have due to it lowering Conkeldurr's Attack & Defense, but if Conkeldurr is about to faint, then it's a good option.

When Conkeldurr first hit the scene I remember the general consensus that it was just a superior Machamp. But that's only looking at base stats. Machamp still has the annoying No Guard + Dynamic punch combo alongside some key support moves like Encore and Quick Guard. How can Conkeldurr top that? Quite simple. What Conkeldurr lacks in support it more than makes up for in raw power. Which is incredible because Machamp hits like a truck regardless.

As if base 140 Attack wasn't enough power, all three of Conkeldurr's abilities boost it's attack further. Iron Fist powers up Mach Punch, Drain Punch and Hammer Arm. Sheer Force makes its elemental punches dangerous, especially when given a Life Orb, and Guts makes it so burns (and status in general) are beneficial to Conkeldurr, it also has the nice side effect of making your opponent think twice about choosing to use Will-O-Wisp so freely.

Conkeldurr not only deals out strong attacks, but can take strong attacks too, base 105/95/65 defenses allow for that. What was that? The special defense is too low? That's why we give Conkeldurr the Assault Vest.

Conkeldurr is a solid Pokemon in and of itself, it is very flexible in the realm of physical attacking so this set can be changed around to suit your teams needs and still work effectively. Hammer Arm under Trick Room will allow Conkeldurr to outslow some of the opposition and maybe even get a flinch with Rock Slide.

Very similar to the last set except for the item and the option to protect. Since Conkeldurr will be hitting very hard, Trick Room support is appreciated to it can OHKO the enemy before it OHKO's Conkeldurr. Drain Punch will keep you alive longer to deal more damage. If Knock off isn't available, Stone Edge hits very hard too.

It is worth mentioning that Conkeldurr get's Helping Hand and Wide Guard. Though I feel that Conkeldurr should be on the receiving end of Helping hand rather than using it itself. and Wide Guard and ward off really obvious Earthquakes or keep the flinch happy Rock Slide at bay. Both can be good options, but again, Conkeldurr can be really flexible, so make it work for your team rather than the other way around.

I think Conkeldurr's best partner would be one that would discourage intimidate users while threatening them at the same time, so Pokemon wih Defiant and Competitive would be good choices. Opposing Talonflame are a problem too so Rotom-W/H wouldn't be a bad partner either.

Overall I'd say Conkeldurr is a great Pokemon, but unfortunately the environment it's in as of XY is not. The introduction of Fairy types and Gale Wings Talonflame have not been kind to it. If you're running Trick Room or are in need of a ridiculously powerful and bulky fighting type, look no further than Conkeldurr.

Special-type moves are key here. As Conkeldurr has got significant Defense and Hit Points, you need to chip away at the Special stat. Fairy-type moves like Moonblast and Psychic-type moves from powerful Pokťmon such as Alakazam, Gardevoir etc. will likely OHKO Conkeldurr with ease. Another threat that can easily topple Conkeldurr is Gale Wings Talonflame. Due to priority, even in a Trick Room Talonflame will hit first with a Flying-type move, but be careful of any Rock-type move at Conkeldurr's disposal. Other Flying-type moves like Acrobatics from various strong Pokťmon can do significant damage, too. 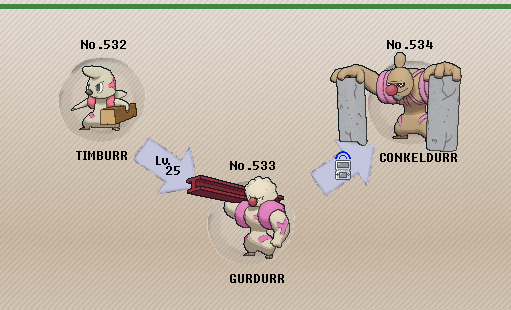