Druddigon, The Cave Pokťmon. It races through narrow caves, using its sharp claws to catch prey. The skin on its face is harder than a rock. It warms its body by absorbing sunlight with its wings. When its body temperature falls, it can no longer move. It runs through the narrow tunnels formed by Excadrill and Onix. It uses its sharp claws to catch prey.

Druddigon is an unusual Pokťmon. It's a pure Dragon-type, the only non-legend pure Dragon-type that doesn't evolve. However, when you look at it, you have to think that it needs an evolution or a Mega Evolution. While it is capable of a lot itself, it's just outclassed by other Pokťmon. That's not to say it's bad, just that there is better around, such as Haxorus. Druddigon can work in better ways, though. It has a fantastic selection of abilities and better bulk than Haxorus. It also works brilliantly in a Trick Room team and is a decent bulky sweeper.
Positives
+ It has a really decent Attack stat at 120
+ The 78/90/90 bulk means it is capable of surviving a lot of hits
+ It has a decent physical movepool
+ Its ability choices are all top-notch

Negatives
- It's very slow
- Most of what it can do can be done better by other Dragon-type Pokťmon
- Due to the proliferation of Fairy-types in the current metagame, it is a sitting duck

Rough Skin: The opponent is hurt by 1/16th of his maxium Hit Points of recoil when using an attack, that requires physical contact, against this Pokťmon. - A decent enough ability, and works brilliantly when stacked with a Rocky Helmet. Can destroy Mega Kangaskhan easily with that.
Sheer Force: Moves with a secondary effect are increased in power by 33% but lose their secondary effect - Always handy, and as usual, when teamed with the Life Orb, you get a further boost without the recoil
Hidden Ability (Available):
Mold Breaker: The Pokťmon's moves are not affected by foeís abilities during battle - This is another useful ability. It removes things like Thick Fat meaning any Fire-type moves it uses aren't nerfed and Ground-type moves hit Pokťmon with Levitate, among many others.

Valley of the Damned

This is Druddigon's standard set, using its Sheer Force ability to its fullest. Dragon Claw and Outrage are both STAB moves, but don't activate Sheer Force in itself. Sucker Punch gives Druddigon some decent priority. For the last two moves though, there are options. Fire Punch and Gunk Shot are the best options, but aren't currently viable in the Kalos Native metagame. They both activate the Sheer Force/Life Orb combo and hit had. Fire Punch gives coverage while Gunk Shot allows Druddigon to actually hold its own against Fairy-types. Alternatively, use Fire Fang and Poison Tail to get the same coverage, albeit a bit weaker. Life Orb is probably the best option for this set, but you can go with the Assault Vest to boost Druddigon's Special Defense to a significant level

The Dragon Bites Back

This set monopolises on the moves that make physical contact with Druddigon, with Rocky Helmet and Rough Skin both inflicting decent damage. This set is essentially to annoy. Glare and Toxic both inflict status on the opponent. Dragon Tail is a powerful move with STAB, but low priority so you will move last, but let's face it, you will with Druddigon anyway. The other two moves are Rest & Sleep Talk, to allow Druddigon to recover health and keep attacking

Choice Band, Earthquake, Iron Head, Iron Tail, Stealth Rock, Thunder Punch
Choice Band can be used to make Druddigon hit even harder.
Earthquake is always a fantastic move, and when teamed with Mold Breaker, it makes Druddigon the perfect counter against Rotom, especially the Heat Rotom which has started to be used more in the metagame. 4* damage, beautiful.
Iron Head is currently transfer only, but it hits hard and, like most of Druddigon's moves, will activate Sheer Force.
Iron Tail will cause decent damage on Fairy-type moves
Rock Slide is always useful, and will get the Sheer Force boost, too!
Special moves like Dragon Pulse can be used to surprise the opponent, but with Druddigon's weak Special Attack, it won't hit overly hard without considerable boosts
Stealth Rock can be used on Druddigon because it can survive hits so will be able to set it up rather well
Thunder Punch can be used for coverage, and will activate Sheer Force.

To me, Druddigon seems to be one of those pokemon that's bound to Mega Evolve one day, just not today. It ALMOST has the stats to be a standalone threat, but just missed the cut, and then Mega Evolutions came in and suddenly, base 120 attack is "meh" instead of "pretty good." All three of it's abilities can be used effectively without absurd requirements or situations (see Zen Mode, Anger Point and Stall). However there are other Dragons with access to Mold Breaker and Rough Skin, for that, Sheer Force will be the primary focus, as it's currently the only Dragon to have it, however, Mold Breaking Earthquakes are hard to come by now and then.

From the Physcial side of things, it's difficult to sell this thing as anything other than an inferior Garchomp. Druddigon has a lower speed, so it can function in Trick Room fairly well, but with Sucker Punch it can hit hard outside of Trick Room. Druddigon also has a good handful of Special Attacks and supportive moves like Snatch and Glare, which I would love to suggest if Drudiggon could have seven to eight moves rather than just four. By all means, if your team covers Aegislash and Fairys just fine then give the moves a shot. It's just difficult to be a supportive Dragon when Dragons all run rampant in the Metagame AND can OHKO Drudiggon like it's nobody's business.

Dragon Claw is the STAB of choice, because Outrage is unpredictable. Sheer Force will enjoy using Fire Fang, but Mold Breaker loves Earthquake, basically depending on your ability, this move is how you'll want to hurt Steel types. Rock Slide works well with both abilities, but with Sheer Force you're giving up the flinch rate for a stronger hit. Sucker Punch is for being able to work in and outside of Trick Room despite Druddigon's speed.

The best partners for Druddigon would be Trick Room users or Pokemon who can handle opposing Aegislash and or Faires, fairly well. Chandelure comes to mind first. Make sure it has Protect in case you're running Earthquake! Also, if you decide to go this route, make sure your team has a solid answer for Azumarill.

Druddigon looks amazing on paper, it just doesn't have the stats to even remotely put on the offensive pressure that the 5th Gen and Mega Evolutions brought to the table, despite Druddigon coming from the 5th gen itself. If and when it evolves/Mega Evolves/gets a higher base stat spread, then expect it to make a very decent showing in that gen's metagame. For now though it ALMOST makes the cut, but almost DOESN'T cut it unfortunately.

The first rule of taking out Druddigon? Same with Ferrothorn, do not make physical contact. Like most physical Attack focused Pokťmon, though, Burn will severely hinder it, so if you can lay down a Will-O-Wisp, you have essentially ruined the Druddigon. The next option is to go forward with super effective moves. As Druddigon is slow, going with a faster Dragon-type is likely to take it down. For instance, a Draco Meteor from a Garchomp, when not boosted, has got a decent shot at taking down Druddigon. Alternatively, go Fairy-type. Most Druddigon likely won't be running powerful anti-Fairy moves, so if you can swoop in and hit it with say Moonblast from Mega Gardevoir, it will go down fast 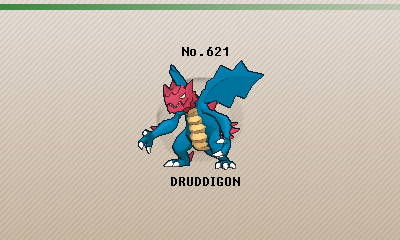