Ampharos, The Light Pokémon. The tail's tip shines brightly and can be seen from far away. It acts as a beacon for lost people. The tip of its tail shines so brightly it can be used to send sea-navigation beacons to distant foreign shores. In the olden days, people sent signals using the tail's light. It gives off so much light that it can be seen even from space.

Ampharos has been a Pokémon that I have always tried to use when in the Johto region. It's a great design, looks absolutely adorable, and yet it holds up very well. Unlike other Electric-type Pokémon, its defence stats allow it to survive hits easily, which is necessary since it has one of the lowest Speeds of any evolved Electric-type. Its Special Attack of 115 is a very useful thing and its movepool reflects this fact. This just makes Ampharos an unexpected powerhouse. Most people don't take it seriously, and you can monopolise on that fact.
Positives
- Its Special Attack stat is really decent, allowing it to inflict some serious damage.
- Its special movepool, while limited, allows for it to always be ready to take down many Pokémon
- It can take hits like a champ
- It works well in a Trick Room

Negatives
- It has a great physical movepool, but its Attack stat isn't high enough to fully take advantage of it
- It only has one weakness, but that's to one of the most common moves you'll find

Static: Thee opponent has a 30% chance of being induced with PARALYZE when using an attack, that requires physical contact, against this Pokémon. - This is very handy compared to its other ability, as paralysis will take a Pokémon down to Ampharos' Speed level
Hidden Ability (Available):
Plus: When battling with Plus or Minus, Special Attack becomes 1.5 times greater. - This ability can be good in Doubles & Triples, especially when used in tandem with Magnetic Flux, but in Singles it is practically useless unless you're against a Pokémon with it

The Shine At The Lighthouse

This set is a classic Ampharos set. It fully utilises Ampharos' bulk and its brilliant Special Attack. The Life Orb gives you a nice boost for every move, but if you are willing to potentially be locked into a move, Choice Specs could work. Volt Switch is a great move that will allow for you to retreat if necessary. Hidden Power & Focus Blast give decent coverage and power and Thunderbolt gets decent STAB and the chance to paralyse. These moves all will help you essentially OHKO or 2HKO most foes.

With Ampharos' Speed, typing & bulk, it's a perfect Pokémon to set up the screens. As it can survive a hit, it can easily set up the screens and lower the damage. From there, you can use Volt Switch to damage the opponent and escape from battle, with Ampharos' Speed meaning that you will likely be able to switch in to another Pokémon without that Pokémon receiving any damage. Then, Toxic can help gradually take down the opponent or, if you don't worry about Kalos Native, Heal Bell removes all status conditions on your Pokémon

Agility, Cotton Spore, Cotton Guard, Discharge, Ion Deluge, Signal Beam, Thunder.
Agility can be handy to bring Mega Ampharos up in Speed to levels that can compete in singles
Cotton Spore & Cotton Guard can be used to screw with an opponent.
Discharge is a powerful enough move that could be used.
Ion Deluge is a quirky move. If you know the opponent is going to use a Normal-type move, you can use it to make sure that it changes to Electric-type, which Mega Ampharos resists
Signal Beam gives another type of coverage
Thunder can be used since it's rather powerful, but outside of rain its lack of high accuracy will cause issues.

Ampharos is rarely seen in doubles unless it's using its Mega Evolution. Its base abilities really don't seem to provide an immediate advantage before Mega Evolving. For comparison, Mawile has Intimidate, Kangaskhan has Scrappy to fake out ghosts etc. Its speed puts it five points faster than Mawile and Azumarill and it has a very interesting movepool alongside base 115 SAtk , will those traits justify not using Ampharosite?

Unfortunately despite Ampharos having generally amazing moves (Cotton Guard, Heal Bell) it's too slow to utilize these moves before taking heavy damage. And under Trick Room, it's better off attacking than supporting, as Trick Room has limited turns to work with. This set will try to bring forth Ampharos's offensive capabilities..

Crank up the Ampharos

The set it pretty straightforward, when Trick Room is up, blast something for as much damage as possible, switch out when necessary. Because Electric is only weak to ground, when using this set, it might not be a bad idea to have a levitator/flying type Pokemon in the back to switch in on the predicted Earthquake.

Unless you're willing to test the limits of a "Plus/Minus" team, I doubt regular Ampharos will fill the offensive or supportive role on just any team it's thrown on.

Ampharos, as a pure Electric-type, has got only one weakness, Ground-type moves. As most attacking Ampharos will run Hidden Power Ice, though, Ground-type Pokémon are likely to fail with this. Earthquake will likely do significant damage. Failing that, Special walls are your best bet as they can absorb Ampharos' attacks with ease. Inflicting Ampharos with Toxic is also a good bet as it relies on its bulk to survive, and this would just make it fall.

Ampharos, better known in Japan as Denryuu could be translated to mean Electric Current, but also could work just as well as Electric Dragon, and low & behold, with the conception of Mega Evolution, they brought this to Ampharos and made it a part Dragon-type Pokémon. Ampharos has always been a relatively decent Pokémon, but the Mega Evolution has made it very scary. Its Speed is reduced, making it perfect for Trick Room teams and its defences have both been significantly buffed. The most notable increase, however, is Ampharos' Special Attack, boosting it a massive 50 points over its standard form. This makes Mega Ampharos a force that very few should reckon with.
Positives
- Its Special Attack is the sixth highest in the game. This means it is going to hit hard
- Its defences both allow it to survive a variety of hits
- Its movepool is rather diverse
- Its addition of Dragon-type has upped its resistances to include Fire, Water & Grass

Negatives
- Its addition of Dragon-type gives it three further weaknesses while it only has one move of that type, Dragon Pulse.
- Its Speed makes it more of a hindrance outside of Trick Room teams.
- Its physical Attack wasn't boosted enough to make physical sets overly viable, and certainly not a better choice over special moves.

Mold Breaker: The Pokémon's moves are not affected by foe’s abilities during battle. This ability is rather decent as it makes Levitate and Sturdy utterly useless against it.

Because It's Worth It

This set is one of the more common Mega Ampharos sets you will see. Dragon Pulse gets the Dragon-type STAB that is expected now it gets the Dragon-type, and is seldom resisted so is a very decent choice. Volt Switch does decent damage with STAB, and will allow you to pull Mega Ampharos out of battle if necessary. For the next slot, Focus Blast can do some considerable damage, able to take down many Pokémon, most notably the Steelix & Excadrill that you're likely to see ,while Thunderbolt is an option to have STAB without forcing yourself to eject from battle. Power Gem and Hidden Power give a further extra bits of type coverage that can do decent damage thanks to Mega Ampharos' Special Attack stat.

This set is one that many will not expect, a physical set. Even though its physical Attack isn't that good, it is passable and it certainly has a movepool to monopolise on it. Wild Charge & Thunder Punch get STAB so can do decent damage. Outrage is a transfer only move at the moment, but thanks to the new typing of Mega Ampharos, it gets STAB making it far more usable. The other moves all give a load of coverage for Ampharos to take on various threats. Power-Up Punch is noteworthy in this because, even though it's relatively weak, it will increase Ampharos' Attack stat with each successful use.

Agility, Cotton Spore, Cotton Guard, Discharge, Ion Deluge, Signal Beam, Thunder.
Agility can be handy to bring Mega Ampharos up in Speed to levels that can compete in singles
Cotton Spore & Cotton Guard can be used to screw with an opponent.
Discharge is a powerful enough move that could be used.
Ion Deluge is a quirky move. If you know the opponent is going to use a Normal-type move, you can use it to make sure that it changes to Electric-type, which Mega Ampharos resists
Signal Beam gives another type of coverage
Thunder can be used since it's rather powerful, but outside of rain its lack of high accuracy will cause issues.

Mega Charizard X is to Reshiram as Mega Ampharos is to Zekrom. Though Mega Ampharos (pretty much) has the same ability as Zekrom. This allows it the break Sturdy, Wonder Guard, and the ever present Lightning Rod Seaking. Base 165 SAtk is monstrous. Base 45 Speed makes it slower than Mawile in Trick Room.

I can't quite explain the feeling of despair that comes over me when my opponent's Trick Room is up and Mega Ampharos comes in. Here is a set I would use under Trick Room

If you're using Trick Room and Rain, STAB Thunder from base 165 will leave (non ground) opponents fainted or severely injured, but Thunderbolt is still a good option because the weather can change unpredictably. Dragon Pulse is there to take advantage of Ampharos's new Dragon typing and the third move is up to what you think your Ampharos should cover. There are a lot of options so there's no one definite "best" option. Protect allows for scouting and gives its ally the option to use Earthquake without repercussions.

Ampharos can run Agility to help ease its speed problem, but often won't find the time to set up, or if it does set up won't deal enough damage to warrant the hefty investment of a moveslot and its turn.

Overall, I believe Ampharos needs its Mega Evolution and Trick Room to work effectively. Without one or the other it will fall short, be it damage output, or speed. Despite needing the extra support, it isn't to be underestimated. If you're running Trick Room, give Mega Ampharos a shot.

Mega Ampharos has a fair few more counters than normal Ampharos. Due to the fact it's part Dragon-type, it has gained Ice, Dragon and Fairy-type as weaknesses in addition to the standard Ground. As such, hitting it with these attacks will do significant damage. Your best bet is to go with a Fairy-type Pokémon such as Florges as, outside Hidden Power, it has very few moves to counter those Pokémon while it can easily take down Dragon-types with its own Dragon moves and Ice-types with Focus Blast. Special Walls are more likely to stop Mega Ampharos in its tracks, but they will still likely get significant damage. Ground-types are also a good bet. If you have a powerful, fast Earthquake user, you'll likely be able to take down Mega Ampharos in a couple of hits. 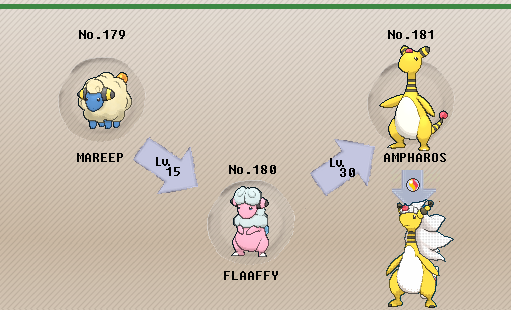