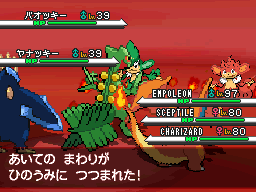 In the Pokémon games, there are many different strategies you could use to win against a clever foe. Some strategies can be used just to lay down an all-out assault on a foe, and some are more skilled and use a combination of defense and more adept move usage. Some Pokémon's heaviest hitting attacks rely on a combination of different moves, some more useful than others. This guide outlines some of those move combinations that you can use against an opponent. Use them on the right Pokémon, and they could be extremely dangerous.

In Black & White, there are Combination Moves which are done by using two seperate moves with two of your Pokémon during Double or Triple battles. These moves will then combine and have an added extra effect. These effects vary from simple status afflictions to doing damage to the Pokémon. Only one of the Pokémon will do the damage to the Pokémon selected, but the effect will occur and lasts for several turns

Effect:
When you use the move Fire Pledge and then the move Water Pledge during a Double or Triple battle, the move will combine and create a a rainbow over the battle area. This move increases the likelihood that any secondary effects will occur when your Pokémon use moves. 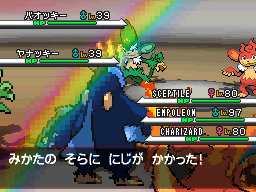 Effect:
When you use the move Water Pledge and then the move Grass Pledge during a Double or Triple battle, the move will combine and turn the field into a swampy moor style area which lowers the speed of your opponent's Pokémon. 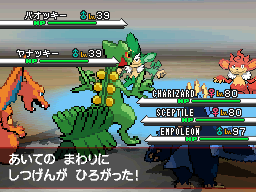 In addition to the main combinations, there are numerous of other combinations spread across several turns and usable in both single and multi battles that will give you an added boost in battle. These range from doing more damage to restoring lost HP.

Strategy: Use Belly Drum to max out your attack, then use Rest so that your HP becomes full once again. Works better with a Chesto Berry.

Strategy: 2v2 only. One Pokémon uses Belly Drum, and the other one uses Psych Up to copy the max attack stat change.

Strategy: Charge, then use an Electric Attack for double damage.

Strategy: If the target used the other Cross move, then the power of your move increases.

Strategy: Dragon Dance as much as you'd like, then use the Physical Attack of your choice for powerful sweeping.

Strategy: When you believe that your opponent is about to strike a final blow on you, use Endure so you'll survive with 1 HP. Then use Reversal/Flail for heavy hits. Works better on faster Pokémon.

Strategy: Use Flatter, then Psych up to copy the upped special attack stat change and not the confusion status.

Strategy: Versus a Ghost-type Pokémon, use Foresight first, then use any Fighting Move you want to and it will hit for damage as it goes around the Ghost-type advantage completely.

Strategy: Versus a Ghost-type Pokémon, use Foresight first, then use any Normal Move you want to and it will hit for damage as it goes around the Ghost-type advantage completely.

Strategy: Leech Seed first for damage, then Ingrain for lots of HP gain. Leftovers as a held item makes this strategy work even better.

Strategy: Using Lock On will ensure that Zap Cannon hits, which has a 50% chance of hitting normally. Zap Cannon also gives an added paralyzing bonus.

Strategy: Mean Look first, then use Perish Song. If you can survive until the turn before both Pokémon faint, then switch.

Strategy: Mimic whichever move you want to ban the other Pokémon from using, then Imprison it.

Strategy: Versus a Dark-type Pokémon, use Foresight first, then use any Psychic Move you want to and it will hit for damage as it goes around the Dark-type advantage completely.

Strategy: Rain Dance first, then use any water attack for 1.5x damage.

Strategy: Rain Dance first, then use Hurricane for 100% accuracy.

Strategy: Rain Dance first, then use Thunder for 100% accuracy.

Strategy: Rest first, then Sleep Talk. A not-so-great strategical combo because it's random.

Strategy: Rest first, then Snore for damage. Not much to say here.

Strategy: Using Safeguard first, use Thrash/Outrage/Petal Dance. At the end of those attacks, you will not get confused because of the Safeguard.

Strategy: Spore, then Focus Punch. Relies a little bit on luck seeing as your opponent might wake up and attack you to disrupt Focus Punch.

Strategy: Subsitute 4 times with your opponent knocking out each of them, then use Flail/Reversal for big damage. Works better on faster Pokémon.

Strategy: Subsitute first, then next turn your opposing Pokémon won't be able to directly hit you. That means that you can pull off a Focus Punch even if your opponent attacks you and hits, because the subsitute will take the hit. This works best if your Pokémon is slower than the opponents.

Strategy: Sunny Day first, then Solarbeam as much as you'd like with no startup phase.

Strategy: Use Sunny Day, then Synthesis/Morning Sun/Moonlight to restore all HP.

Strategy: Sunny Day, then use any Fire attack for 1.5x damage.

Strategy: Use any move to increase your Pokémon's status, then use Baton Pass to give those changes to any other Pokémon of your choice.

Strategy: Use Swagger to confuse your opponent, then use Psych Up to copy the upped attack but not the confusion.

Strategy: Use Swagger, then use Screech to move the defense of the opponent down as much as you'd like to greatly increase the damage taken when they hit themselves in their confusion. Works well in conjunction with attacking moves as well.

Strategy: Use Toxic, then use Fly continuously to make opponents hit half of the time. Doesn't work well if your opponent has something to hit you in the air/ground though.

Strategy: Toxic first, then just keep using Protect or Detect. Not much else to say here.