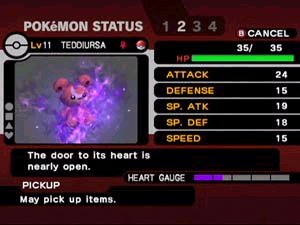 One of the more recent inclusions to the Pokťmon series, specifically for the Gamecube games, is the addition of Shadow Pokťmon. In the two Gamecube games, which are known as Pokťmon Colosseum and Pokťmon XD, the main character is equipped with a device that allows you to steal these Shadow Pokťmon from their trainers to use for your own deeds. Having said that, itís much more of a focus to catch Pokťmon in these games than any other with this mechanic, because there are no actual wild Pokťmon. Also, all shadow Pokťmon behave differently in terms of growth, move development, and loyalty. This guide outlines all of the things about the sort-of elusive Shadow Pokťmon.

First comes how to get these Pokťmon. Iíll repeat that these Pokťmon only exist in the Gamecube games. Meaning, they cannot be traded and do not exist in the Gameboy Advance games. When you enter a battle in the Gamecube adventures, these Pokťmon will make themselves apparent to you by either being shown to you by the female sidekick in Colosseum, or using the scanning device in XD. One of the main focuses in the games are to catch these Pokťmon, so the tactic to catch these Pokťmon is generally the same as the Pokťmon in the other games. If you donít know itÖ itís where you lower the opponents HP, and add a status effect, then throw a type of ball. If it stays in long enough, then you caught the Pokťmon. Hopefully you knew that. If youíre looking for the lists of Pokťmon that have this Shadow aura about them, look in the respective sections for the lists.

So then you catch it. What do you do with it? Well if you get into a battle with any Pokťmon with it, youíll see that it only starts off with the shadow moves that it can learn which, in Colosseum, is limited to one move: Shadow Rush. If used, this move will have a chance to put the Shadow Pokťmon into "Hyper Mode", in which the Pokťmon will often score a critical hit with shadow attacks, but not really listen to any other command besides that. While XD has various other moves in which you could use instead of a suicidal StruggleĒ attack (which you can find by clicking here), you will probably want to get rid of the move for better moves. You wonít be able to learn TM moves either while itís afflicted with the shadow status. On a side note, the Shadow moves in Colosseum will not be affected by Weaknesses or Resistances while in XD, the Shadow Type is Super Effective against all other types. 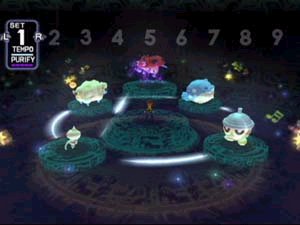 So how is it possible to get rid of the Shadow status of these Pokťmon? If you look in the Pokťmonís description, youíll see a purple bar divided into five sections. If you get the bar as low as possible, you get the option to rid the Pokťmon of its Shadow status. Six ways are available.

1. Simply having the Pokťmon in your party will shrink the bar over the period that you walk.
2. Sending it out into battle.
3. Calling the Pokťmon out of Hyper Mode.
4. Putting the Pokťmon in the Day Care.
5. Using a Time Flute. Use them sparingly since thereís only three in Colosseum.
6. In XD, use the Purify Chamber that works by placing a Shadow Pokťmon in the Middle then Purified or Regular Pokťmon around it and the speed and amount of purification depends on the amount of Pokťmon and their types. With different combinations you can get the Purification done quicker and thus when the Heart Guage is empty, there will be a Purification Ceremony

Certain things happen when you lessen the bar enough. When you are 1/5 the way there, another move will be available for you to use besides the shadow move. After 2/5, you are able to see what nature the Pokťmon has. After 3/5, another move becomes available. After 4/5, the third move is able to be used.

Now, to be able to purify the Pokťmon completely in Colosseum, you need to bring the Pokťmon to Celebiís Shrine in Agate Town. Simply talk to the shrine, select a Pokťmon that can have the "door to its heart unlocked", and it will get rid the Pokťmon of its shadow status and it will become a normal Pokťmon once more. Another effect of purifying is that it rids the Pokťmon of the Shadow move that it has and replaces it with a fourth move for the Pokťmon. Once it has been purified, the Pokťmon will gain all the experience & effort points it earned from it's battles as a Shadow Pokťmon and rise in level accordingly, maybe even evolve!

Thatís pretty much everything. 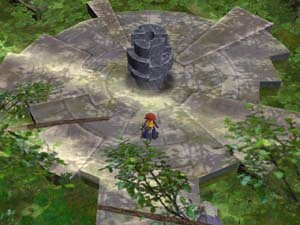