You have probably heard or seen a picture of them. Pokťmon that are different colors than normally seen with. An example of that could be a Metagross with a silver coating and a golden X on it, a dark green Zubat, or a black Rayquaza. The Torchic you may have obtained from Professor Birch may be a lighter colored orange and you may think the game is glitched up, but it isn't. As you can imagine, these occurences are very, very rare. Not very many people even have a shiny Pokťmon to begin with. So how do you get them?

It depends on very, very good luck to get a shiny Pokťmon. You can find shiny Pokťmon in the wild, in eggs, and in the battle tower, which is basically everyplace you can catch a Pokťmon save for the Battle Tower in which you won't be able to catch the shinys there. Needless to say, you wont be very lucky if a shiny ends up there. People have said that you can also meet a shiny when in your first battle against the wild Poochyena and Wally's Ralts as well. Basically, like I said, it revolves around how lucky you are. Now the bad thing is that the odds of finding a shiny Pokťmon in the wild are 1 in 8,192 battles...all the time, meaning after 8,191 battles it'll still be 1 in 8,192 and not a dead cert that you will get one i.e. not 1 in 1 battles. This rate has been altered as of Pokťmon X & Pokťmon Y to make Shiny Pokťmon more common.

Now you'd think with a Pokťmon this rare, it has to have good Individual Values and such. That's no longer the case. Shiny Pokťmon are always going to end up with the same odds of good stats as normal Pokťmon. They used to have set IV's in the Metal generation where it had 0 HP IVs, random Attack IVs and IVs of 10 in Defense, Speed, Special Attack and Special Defense, but since then and until XY, it has been based upon the hidden PID of the Pokťmon. As of Pokťmon X & Y, it is a 1 in 4,096 chance of finding a shiny Pokťmon.

In the fourth generation, a variety of things have changed in order to allow for the obtaining of Shiny Pokťmon. First is a method commonly known as the Masuda Method, named after the game developer and the person who revealed it; Junichi Masuda. This method has you breed two Pokťmon. However, one of the Pokťmon must be of a different nationality than your game (such as a Japanese Pokťmon on an English game). This will lower the chances of hatching a shiny Pokťmon from 1 in 8,192 to 1 in 2,048 cutting it by 75% in Generation IV. However, in Generation V, it is boosted even further from 1 in 8,192 to 1 in 1,365.3. Generation VI has increased the likelihood even further thanks to the decrease in standard shiny rate, being 1 in 682.7.

The second method of obtaining shiny Pokťmon is through the method called "chaining". This method has you carry on a chain on the PokťRadar within Diamond, Pearl, Platinum, X & Y. As you battle the Pokťmon and your chain increases, the chances of seeing a Shiny Pokťmon also increases up until you're on the 40th chain where it levels out. Continue the chain and you may see the grass glow instead of shaking. If this occurs, there is a shiny Pokťmon there. When you defeat or capture a Pokťmon you have discovered with the PokťRadar, the chain begins and you need to follow the chain to other grass tiles to continue the chain. These chains are broken when a different Pokťmon appears or you encounter a Wild Pokťmon outside of the set grass tiles so it is recommended that you use Repel or other Wild Pokťmon prevention techniques. Shiny Pokťmon are easily findable with the PokťRadar. If you have found a Shiny Pokťmon with the PokťRadar, the grass will shine as opposed to shaking. With chaining, you have the ability to increase the likelihood of finding a Shiny Pokťmon. This is done by having a prolonged chain on the PokťRadar. The chances increase up until the 40th Pokťmon in the chain. This is calculated with the following formula;
Chance = (14747 - 40*ChainNumber)/2621440(41-ChainNumber)
After each use of the PokťRadar, it requires recharging. This is done by walking 50 steps.

Chaining goes even further in Pokťmon X & Y due to the inclusion of Consecutive Fishing. With this, as you hook Pokťmon with the fishing rod, you get increased chances of getting a shiny Pokťmon. This will increase with each Pokťmon you hook without leaving the spot, regardless of if you defeat them, capture them or run from battle. If you don't get a nibble, or if you move from the place you were fishing, you will break the chain. The chain also resets once you get a shiny Pokťmon. Exact values are still to be discovered.

Chaining is even utilised in Let's Go, Pikachu & Let's Go, Eevee. If you catch more of the same species of Pokťmon in a row, the shiny odds will gradually increase. This caps out at 31 in the combo where it makes Shiny Pokťmon 14 times more likely if you have a Shiny Charm.

In Pokťmon Black 2 & White 2, a new item is introduced called the Shiny Charm. This item, obtained when you have completed the National Pokťdex, increases the chances of Shiny Pokťmon appearing. As it's a Key Item, when you have the item in your bag, then the chances of encountering Shiny Pokťmon in the wild is increased to 300% of normal, making it a 1 in 2,730.6 chance. If, however, you're using the Masuda Method to breed, it reduces it from 1 in 1,365.3 down to 1 in 1024 and, from X & Y onwards, 1 in 512!

In addition to this, there have been numerous Shiny Pokťmon that have been encountered in events and even more notably, within the games themselves. These Pokťmon are always shiny no matter how many times you soft reset. In the Trainer Tower in FireRed/LeafGreen, there were also a couple of trainers with Shiny Pokťmon 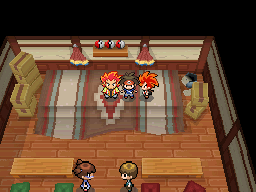 Method:
After you have seen all the Pokťmon in the Unova Dex, you will receive a License. This item, when shown to the airport attendant in Mistralton City, takes you to the Nature Preserve, a place filled with wild Pokťmon. However, in the middle of this sanctuary is the rare Shiny Haxorus. 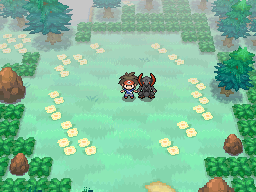 Method:
Unlock Criteria: After Kleavor and having caught a Ponyta

There was a request regarding a rare Ponyta. Go get the details from Yota, one of the local villagers in Jubilife. Yota is alarmed by the unusual Ponyta that frequents the Horseshoe Plains. He wants you to catch it for him. When you find Yota, you will discover he has seen an unusual Ponyta walking around Horseshoe Plains. If you go to investigate it, you will find a Shiny Ponyta. Catch it and bring it to Yota to solve the mystery. 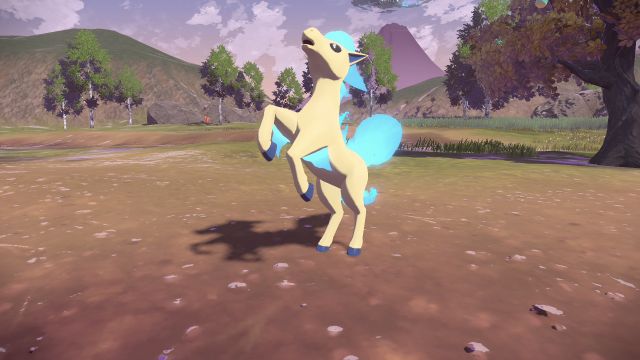 In Generation IV and Generation V, nearly all the non-Shiny event Pokťmon you obtain are coded to not be shiny. These Pokťmon can usually be soft reset for IVs and natures, but they will never be shiny. There are a few exceptions for this, such as a couple of Kyushu events in 2012 in Japan. In addition to this, in Pokťmon Black, White, Black 2 & White 2, several of the wild Pokťmon are coded to not be shiny, specifically the legends Victini, Reshiram and Zekrom. In X & Y, none of the Legendary Pokťmon can be shiny.

As of now, the following Pokťmon cannot be shiny under any circumstance.

Starting in Pokťmon Black & White, the developers started instituting locks where Pokťmon could be caught in a wild but prevented from being shiny. These locks are mostly done on the signature legendary Pokťmon of the games, but do range further. These Pokťmon are usually available as shiny through other games and are only locked through the particular game listed.