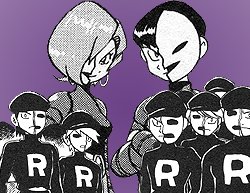 Neo Team Rocket, also known as the Johto Team Rocket, was resurrected from the scattered Kanto TR members under the lead of Mask of Ice. Compared with the Kanto TR, this new evil organization did not show any specific aims behind their evil doings initially until later in the GSC series, where it became apparent that the destructions and burglaries they commit were to help fulfill the goal of Mask of Ice to control time.

9 years ago, Mask of Ice recruited and kidnapped six children with the power of Ho-Oh across Kanto and Johto, namely Blue, Silver, Shum, Cart, Will and Karen. They were given masks to wear and were referred to as the Masked Children. While Blue and Silver managed to escape, Shum and Cart eventually became subleaders of Neo Team Rocket, and Will and Karen continued to work directly under Mask of Ice.

Towards the end of the GSC series, Neo Team Rocket members were given half masks to wear, which were technically brainwashing devices made by Mask of Ice. The Elite Trio of the Kanto TR, Ken, Ryu and Harry, were also recruited under NTR and were brainwashed by the half masks eventually. Shum, Cart, Will and Karen no longer wear masks, but Shum and Cart once put on half masks (probably without brainwashing functions) like the other NTR members during their showdown with Gold and Crystal in the Indigo Plateau Pokemon League control room.

The identity of Mask of Ice was revealed to be Pryce after Gold bursted his mask with his billiard pole. Attempting to turn back time and change a tragedy in the past, Pryce captured Celebi with the GS (time-capturing) ball made from the Rainbow and Silver Wings. With the combined forces of Gold, Silver, Crystal, Red, Green, Blue, Yellow, the three legendary beasts, Entei, Raikou and Suicune, Pryce was eventually stopped. Having released the sorrow and anger he's kept to himself after all these years, Pryce fell into the voids of time and has not been seen since then.

Will & Karen
The Elite Trio: