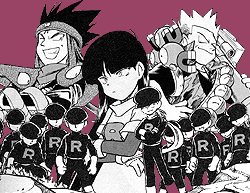 Team Rocket is the evil organization in Kanto that conducts inhumane biological experiments and alterations to Pokémon. The full meaning of Rocket is 'Raid On the City, Knock-out Evil Tusks'. With their extensive network in Kanto, Pokémon are stolen or captured across the land, then sent to the secret lab underneath the Celadon Game Corner for biological alterations, followed by a series of tough training in Saffron. Afterwards, these Pokémon are shipped on the liner, S.S. Anne, from Vermillion harbour, via Cinnabar Island, and finally to Viridian where they are dispatched into the deep woods of the Viridian Forest to regain their wildness. Mewtwo is one of the biologically engineered Pokémon created by TR based on the DNA of Mew.

During the RGB saga, Red, Green, and Blue had a major showdown with TR at its headquarters in the Silph Co. Building, where Moltres, Zapdos and Articuno were merged into Zapmolcuno by the Gym Badge Energy Amplifier. Defeated, TR members were either arrested or fled after the Silph Co. Building collapsed. Team Rocket's leader, Giovanni, also the gymleader of the Viridian Gym, lost to Red in a gym challenge and disappeared, temporarily putting an end to the operation of this evil organization.

During the Yellow saga, the ambush of the TR Elite trio, Ken, Ryu and Harry, on S.S. Anne alerted the public about the secret re-grouping of the team under the efforts of the three TR executives, Lt. Surge, Koga and Sabrina, who were thought dead and buried under the collapsed Silph Co. Building. Green, Blue, Yellow, Bill and Blaine, a former TR executive who quitted during the RGB saga, joined forces with the three to combat the Elite 4 on Cerise Island, where Giovanni resurfaced to help fight Lance. After witnessing the gigantic battle between Yellow and Lance, Giovanni realized he still has much to learn and decided to official call off Team Rocket.

A few years later, in the FRLG saga, Giovanni has reformed Team Rocket in pursuit of the space pokemon Deoxys. Instead of calling upon his old executives, he has assembled a trio of direct secret agents known as the Beast Warrior Trio, namely Jagura, Oca and Storc. After snatching the returned Pokedexes of Red, Green and Blue at Prof. Oak's science lab in Pallet, the trio also kidnapped the professor himself, and lured the three young trainers to the Sevii Islands, where the new headquarters of TR was. Unlike in the past, the reformed TR now consisted of female grunts as well. Tricking the young trainers into weakening Deoxys for him, Giovanni eventually managed to capture the pokemon, and it was revealed that his ultimate aim was to find his long lost son, Silver.