Blissey, The Egg Pokémon. This kindhearted Pokémon nurses sick Pokémon to health. It senses feelings of sadness. It is a Pokémon that delivers happiness. Eating its egg is said to make one kind to everyone. The eggs it lays are filled with happiness. Eating even one bite will bring a smile to anyone.

The best special wall in the game... not so much anymore, taken over by its pre-evo Chansey in terms of usefulness. It still has a few advantages over Chansey, but they don't save it from being inferior. It has much higher Special Attack meaning it can use an attack other than Seismic Toss. It has Leftovers, which is a huge factor considering how popular Sandstorm is. Bigger wishes is also an advantage, although it's hardly any difference to really matter. Chansey just straight out takes hits better than Blissey. With all the new offensive powerhouses, Blissey finds it harder and harder to take hits with each generation, but with the popularity of Conkeldurr, Breloom, and other hard hitters, Blissey is struggling to find use, epsecially with Chansey being superior.

Natural Cure: an awesome ability, especially on a defensive Pokémon like Blissey. It allows it to switch into attacks without fear of getting inflicted with a status. You could even switch it into status inflicting attacks like Spore as you know it will be gone as soon as you switch out.
Serene Grace: a great ability, but sadly wasted on Blissey. Only seen of more offensive sets, and considering those are barely seen... you get the picture. Basically, it doubles the chance of secondary effects from moves is doubled. It's useful on a few sets... but Natural Cure is what you want.
Healer: has some use in doubles/triples, but otherwise stick with Natural Cure.

I prefer poached if I'm honest

Hello standard Blissey! You've only been around a few generations now... yeah, Blissey still uses more or less the same set. Everyone knows what this does by now. Softboiled heals any damage done to you. Seismic Toss is your main method of damage, doing a set 100 every time, which is the most damage Blissey will be doing without any boosts. The status move depends on what you want Blissey doing. Thunder Wave cripples pretty much every switch in, but there's always Ground types, Zapdos and Guts Pokémon to think about. Thunder Wave slows stuff down, whereas Toxic breaks things down. You just have to pick what you want to go with, as both are good options and have their own drawbacks. Same with Ice Beam and Flamethrower, although you'll want to use Toxic with Flamethrower thanks to the cool coverage they both get. Aromatherapy cures the team, but in this fast paced and hard hitting metagame, it's often hard to find the opportunity to switch Blissey in and predictably use Aromatherapy.

Is that an airplane in the night sky?

No, it's WishBliss! The most effective Blissey this generation, in my opinion. Wish has changed a bit since 4th gen, as it now heals half the HP of the Pokémon that used it. So Blissey's Wish heals 336 HP, meaning mostly full recovery on a lot of sweepers and... a lot of Pokémon in general. Protect stalls Wish which is always good, but also stalls for Toxic damage, and Sandstorm or Hail if you have it in play. Flamethrower hurts any Steels that would otherwise block your Toxic except for Heatran.

A Blissey designed to hurt? Ludicrous! Well, not really... once set up, CMBlissey can actually do a lot of damage. This is a set that it can use way, way better than Chansey. Calm Mind boosts your already great Special Defence and... sorta meh Special Attack, making it much less meh. Softboiled keeps you healed up nicely, as you will likely take some damage whilst setting up. Ice Beam and Thunderbolt combine powers to form the unstoppable BoltBeam, but it's got a nemesis in the form of Focus Blast and Shadow Ball, which together get perfect coverage. Go with what you want. BoltBeam doesn't hit for super effective damage on Steels, whereas Focus Blast is hardly reliable, Shadow Ball is weaker than BoltBeam, and BoltBeam hits a lot of Pokémon for super effective damage. Serene Grace is preferred on this set as it can really annoy your opponent with increased para and freeze hax. Not to mention, you won't want to switch out once you have a few boosts. However, Natural Cure does stop you from being put to sleep for long, stops a random freeze and gets rid of Toxic.

I'd make some joke about Blissey being charming but... NOPE

Charm turns Blissey into a complete tank with the power to phaze... sort of. Charm lowers the enemy's Attack by two stages, meaning Blissey's former pathetic Defence isn't actually so bad anymore. The opponent will then switch like crazy to get rid of the -2 Attack, which is why you have Spikes, Stealth Rock, Toxic Spikes, whatever. As many entry hazards as you can get, so that when they do switch, the switch in takes a truckload of damage. However, they might not switch. Awesome, stall the opponent out with poison. Softboiled kees you healthy. Toxic will be your main source of damage, with Flamethrower there to take down any Steels that want to block your acid.

I prefer poached if I'm honest
Max Defence keeps your Defence up, which Blissey really needs. 350 Special Defence is all it really needs(and that's a pretty nice number), and the leftover is put into HP as it would be a waste anywhere else.

Is that an airplane in the night sky?
4 extra EVs in HP to round Wish up so it heals one more point. Otherwise, exactly the same as the last spread.

Let's take a calm approach
You are boosting Blissey's Special Attack and Special Defence... you don't need anything invested in those stats. Max HP and max Defence keeps Blissey on top of its game on both sides of the spectrum.

I'd make some joke about Blissey being charming but... NOPE
You want to be taking the most physical hits you can, and you don't want your Charm to go to waste, right? Max HP and max Defence it is.

Blizzard, Block, Charge Beam, Counter, Grass Knot, Gravity, Heal Bell, Heal Pukse, Psych Up, Sing, Stealth Rock, Thunder Blizzard is useful on a Hail team, or on a set with Gravity, as it can be used for freeze abuse with Serene Grace.
Block stops an opponent from switching, Could work with Toxic.
Charge Beam is an offensive Calm Mind, and a weaker Thunderbolt.
Counter is pretty awesome on Blissey, but Chansey does it better thanks to better Defence.
Grass Knot is another Special Attack worth considering.
Gravity makes all moves 100% accurate, as well as bring floating Pokémon down to ground. It's a cool move, worth consideration with Blizzard,Thunder and Serene Grace.
Heal Bell is... Aromatherapy.
Heal Pukse is only worth using in Doubles/Triples, as otherwise it is worthless. It's a Softboiled for a team mate.
Psych Up is cool in ubers where you are more likely to see something use Calm Mind or a stat boost you can steal.
Sing is a sleep inducing status move that is unreliable beyond belief.
Stealth Rock could be used on Blissey, as it will be able to set it up... there's other Pokémon who do it better though. Blissey could use the slot for something more useful.
Thunder is great on a rain team or under Gravity, as you have a huge chance of paralysis.

Honestly, Blissey isn't ideal for multiple Pokémon battles. Walling isn't really seen in doubles or triples, and that's what Blissey does. I guess it can use Heal Pukse but... that's about it. You could abuse Serene Grace with moves that hit everyone but... there's probably something more useful that can do that.

SKARMORY! SkarmBliss has been famous since it was used, and it ruled 3rd gen with an eggy steel stump wing. 4th gen came along and made them less effective as there were more Pokémon that could break the combo. However, Skarmory still works as a partner. Pokémon that take physical hits well are ideal, but specifically Fighting hits. Gyarados, Salamence, Gliscor, Zapdos, the list goes on. Pokémon that are easily revenge killed by common Special revenge killers like Starmie are worth partnering with Blissey. Gyarados, Salamence, any big hitter that is stopped by a simple Scarf Ice Beam or what not. Honestly, Blissey can be used on any team as a special sponge. It's what it is best at, and any team can use it.

Physical Fighting moves. Machamp, Conkeldurr, Breloom... hell, even Hitmonchan can beat Blissey with a punch. Blissey's Defence is so pitiful that any physical Fighting move will be laying a lot of hurt down. Machamp and Conkeldurr are especially dangerous because of Guts, which means they are hitting even harder if you status them on the switch in. two new moves are two new threats to Blissey, Psyshock and Psystrike. These are special moves that target the opponent's Defence, meaning Blissey is very much at risk. Whimsicott is a pretty big counter considering it can Taunt, Encore and Leech Seed Blissey whilst it can only sit there struggling or repeating the same move over and over. It can't switch in safely due to statuses, but it's still a threat. Speaking of Taunt, that pretty much shuts Blissey down, considering it can't heal or inflict status. Hey, speaking of Leech Seed, Blissey is the ideal target for that move due to its huge HP. Pokémon immune to Toxic and Thunder Wave are generally good switch ins as Blissey will want to be statusing everything it can. Poisons, Steels, Grounds and Lightingrod Pokémon are what you want. Blissey isn't really... a threat. It can't take physical hits like... at all, and it is getting hit harder and harder by everything due to everything getting stronger. It's still good just... don't overestimate it.

Hello Chansey! As you can probably tell from the tone of this POTW, Chansey has actually become better than Blissey, thanks to the 5th gen item, the Eviolite. It gives whatever Pokémon is equipped with it an extra 50% Defence and Special Defence. That's right, Chansey ends up with 178 Defence, 463 Special Defence and 642 HP (assuming you are running 4 HP / 252 Def / 252 SDef). That's insane. Anyway, when using Chansey you have to remember it isn't Blissey. Do not run an attacking move on Chansey except for Seismic Toss. Do not forget it has no Leftovers (probably Blissey's main selling point). It won't have as much HP as a standard Blissey either (although like that matters when you have 642 anyway). Basically, if you want something to take hits, throw status around, that kinda thing, and you aren't worried about the offensive aspects at all, go for Chansey. If you want something inferior which works better in Sandstorm, use Cradily. No, no, use Blissey. Remember, Blissey has Leftovers. Special attacks and Leftovers are Blissey's advantages. Chansey is just flat out better. 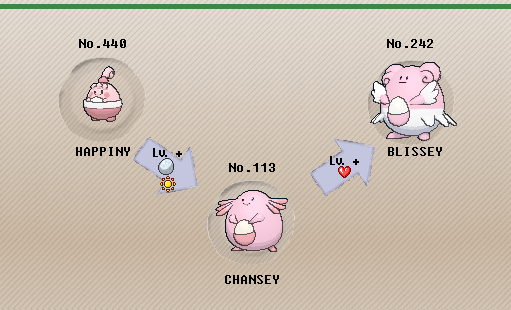