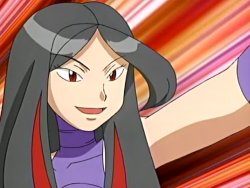 Lucy is the leader of the Battle Pike. Having several people who assist her in the Battle Pike, Lucy tends to make her presence known through a Seviper patterned needle being thrown. The Battle Pike, shaped like a Seviper, does not have any special battle conditions set by Lucy but is set on terrain which includes both ground and water and must be used accordingly. Lucy is a bit bruff but has a thing for Snakes and People/Pokémon with "slanted eyes"

Lucy has worked up the ranks and competed to be a Frontier Brain and now runs the Frontier Facility; The Battle Pike. She gives the Luck Symbol to trainers that defeat her.