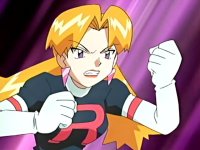 Cassidy is a member of Team Rocket. Just before she joined, she met Jessie and from that meeting, a huge rivalry started. When she joined, she was paired up with Butch and given a Raticate as their partner. More successful than their rivals Jessie & James, Butch & Cassidy are given the more high profile jobs for Team Rocket including several Breeding Center scams and many other tasks. Cassidy is fairly vain and arrogant, which constantly annoys Jessie, but managed to come up with successful scams...unless Ash & Co, end up involved. For a short time, she was teamed up with James.